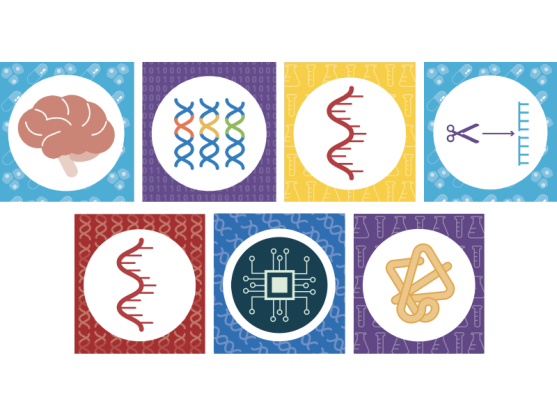 Welcome to the October 29, 2021 installment of Research Roundup, a recurring snapshot of recent studies published by scientists at the Broad Institute and their collaborators.

Getting an eToehold on eukaryotic translation - RNA, general sci

Synthetic approaches for detecting and responding to RNAs could enable biotechnology applications ranging from cell-type targeting to genetic circuits. Previously, researchers developed “toehold switches”: RNA-based prokaryotic switches that can detect specific RNAs. Now, Evan Zhao, Angelo Mao, Emma Chory, institute member James Collins of the Infectious Disease and Microbiome Program, and colleagues have developed “eToeholds”, which function in eukaryotic cells. eToeholds enable controlled translation of a desired protein only in the presence of specific trigger RNAs. In Nature Biotechnology, the researchers show eToeholds can induce a 16-fold change in translation of reporter genes, function in human and yeast cells, and can distinguish between cell types and states. Read more in an MIT news story.

As cells build proteins, certain molecules may be added to modify the proteins in different ways. To study the role of these changes, researchers need the ability to find and collect such altered proteins. In Molecular & Cellular Proteomics, a team led by Sam Myers (La Jolla Institute for Immunology), Rajan Burt, and institute scientist and senior director of Proteomics Steve Carr evaluated an approach using antibodies to capture proteins that are modified by the addition of N-acetylglucosamine to serine and threonine residues (a modification called O-GlcNAc). The method, tested in mouse brain tissue, simplifies the analysis of O-GlcNAc signaling and will help elucidate the role of this protein modification in health and disease.

A conversation about the legacy of ENCODE and what comes next
Research Roundup: November 5, 2021