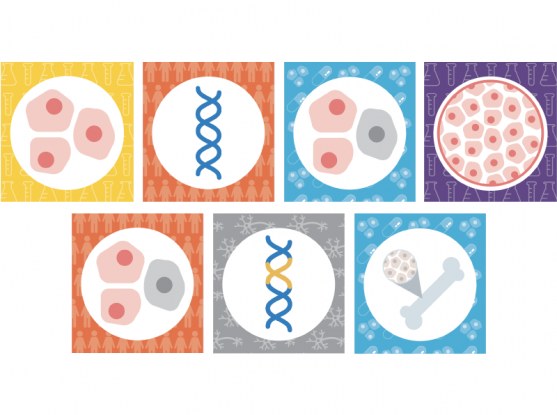 Welcome to the October 22, 2021 installment of Research Roundup, a recurring snapshot of recent studies published by scientists at the Broad Institute and their collaborators.

A different angle of ATAC

Evgenij Fiskin, core institute member (on leave) Aviv Regev, and colleagues in the Klarman Cell Observatory and beyond have developed PHAGE-ATAC, a multi-modal single cell technology that enables researchers to analyze single cells' proteins, chromatin accessibility, and cellular lineage simultaneously. In contrast with technologies like CITE-seq or DOGMA-seq, which use DNA barcode-conjugated antibodies and which can profile a few hundred proteins per cell, PHAGE-ATAC relies on genetically-encoded phage nanobodies. The use of such nanobody libraries paves the way for scientists to profile thousands of proteins from each single cell at the same time, and opens an avenue towards proteome-wide single cell measurements. Learn more in Nature Biotechnology and a tweetorial by Fiskin.

In a perspective in Nature, Swapan Mallick, Nathan Nakatsuka (HMS), Nick Patterson, and senior associate member David Reich in the Program in Medical and Population Genetics (MPG), together with an international group of co-authors including archaeologists, anthropologists, curators and geneticists, propose five guidelines for ethical DNA research on human remains. They propose that researchers must engage with stakeholders from the beginning of a study and ensure respect and sensitivity to stakeholder perspectives, must ensure that data are available following publication to allow others to re-examine scientific findings, and must minimize damage to human remains. The authors committed to following these guidelines in their work and expect that they will help promote high ethical standards in research on ancient genomes going forward. The authors also translated the article into 23 languages.

Predicting where the CHIPs may fall

Clonal hematopoiesis (CH) is the clonal expansion of hematopoietic cells bearing somatic mutations and is a common part of aging. Mutations in certain genes define clonal hematopoiesis of indeterminate potential (CHIP) and are associated with an increased risk of myeloid malignancies. Visiting researcher Abhishek Niroula, institute member Benjamin Ebert in the Cancer Program, and team members studied peripheral blood to look for other CH-related mutations linked to lymphoid malignancies. By analyzing whole-exome sequencing and SNP-array intensity data from the UK Biobank and the Mass General Brigham Biobank, they identified distinct myeloid- and lymphoid-associated CH mutations, which predicted lineage-specific cancers. The findings could be used to identify high-risk individuals. Read more in Nature Medicine.

A large number of genetic variants are linked to a family of neurologic disorders known as dystonias. Aloysius Domingo, institute member Michael Talkowski in the MPG, and Cristopher Bragg (MGH) characterized the functional impact of an allelic series of missense and loss-of-function variants in the THAP1 gene, which encodes a transcription factor linked to neural differentiation and a monogenic form of dystonia. Transcriptome profiling of neural stem cells engineered to carry either THAP1-dystonia missense mutations or THAP1 deletion revealed a convergent pattern of dysregulated genes related to neurodevelopment and myelin. Structural myelin defects were then validated in brains of mice with Thap1 disruption. Appearing in the American Journal of Human Genetics, the study highlights the potential role of neuron-glial interactions in dystonia pathogenesis.

Seeking the sources of resistance