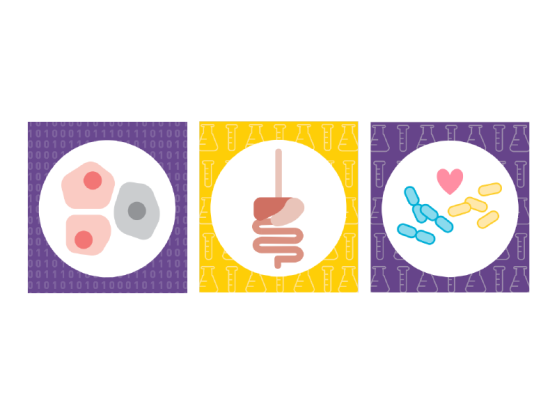 Welcome to the November 12, 2021 installment of Research Roundup, a recurring snapshot of recent studies published by scientists at the Broad Institute and their collaborators.

Bacterial species interact in numerous ways that are broadly considered either negative (one blocks another's growth) or positive (one promotes the other). The latter are considered rare, but in Science Advances, Jared Kehe, core institute member Paul Blainey, Jonathan Friedman (Hebrew University), and colleagues report that such relationships may actually be quite common. Using kChip, a co-culture platform developed in the Blainey lab, they studied 180,000+ interactions between 20 soil bacteria. Their findings suggest that species' positive interactions are generally parasitic (one's growth improves at another's expense) and that strongly-growing bacteria bolster the growth of those that do not typically thrive in culture.

Modeling T cell dynamics before and after immunotherapy

How microbiome molecules impact the gut

The endoplasmic reticulum (ER) plays an important role in quality control of cellular proteins. In Genome Biology, a team led by Xiaobo Ke (Novartis) and core institute member Ramnik Xavier, director of the Klarman Cell Observatory and Immunology Program and co-director of the Infectious Disease and Microbiome Program, describes the microbiome-related metabolites in the gut that could influence this organelle's stress response, which may contribute to inflammatory disorders of the gut. The researchers identified both inducers and suppressors of the ER stress response, and demonstrate that these molecules affect the ER via protease inhibition or lipid metabolism interference. The work provides insight into the dynamic pathways the intestinal epithelium uses to monitor microbial metabolites.