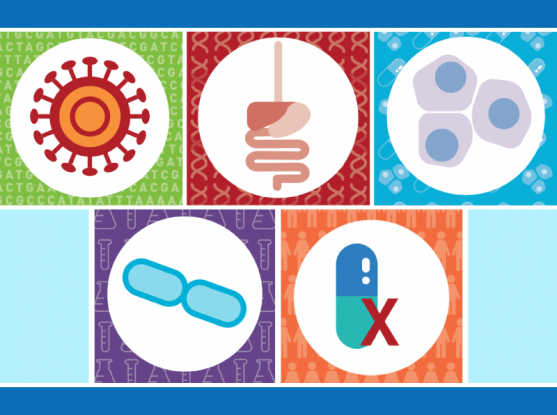 Welcome to the May 14, 2021 installment of Research Roundup, a recurring snapshot of recent studies published by scientists at the Broad Institute and their collaborators.

The evolution of drug resistance

Antibiotic resistance is one of the most urgent threats to public health, yet researchers’ understanding of how pathogens evolve resistance remains limited. To address this gap, Peijun Ma, Infectious Disease and Microbiome Program (IDMP) co-director Deborah Hung, and colleagues investigated the evolution of carbapenem resistance in Klebsiella pneumoniae, a bacterial species that can cause deadly multi-drug-resistant infections. They identified multiple genetic factors that facilitate the rise of carbapenem resistance, and propose that defining infecting pathogens at a much higher genetic granularity (beyond simply species identity and antibiotic susceptibility) can have important implications for diagnosing and treating such infections. Read more in eLife.

Prodrugs, compounds that are metabolized in the body to become active drugs, can be used as antimicrobial drugs if their activation relies on the activity of an enzyme found only in their microbial target. In ACS Chemical Biology, Kenton Hetrick, Miguel Aguilar Ramos (MIT), and Chemical Biology and Therapeutics Science Program associate member Ron Raines reported that a sulfurol ester prodrug of the antibiotic trans-3-(4-chlorobenzoyl)acrylic acid is more effective against Mycolycibacterium smegmatis because an endogenous esterase  sensitizes it to the prodrug. Future work could harness a range of bacterial enzymes in developing narrow-spectrum antibiotics to help address the ongoing public health threat of antimicrobial resistance.

Knock your Sox off