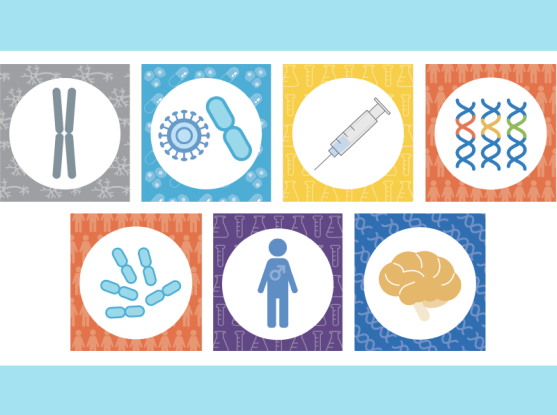 Welcome to the July 11, 2022 installment of Research Roundup, a recurring snapshot of recent studies published by scientists at the Broad Institute and their collaborators.

How a chromosomal deletion may cause schizophrenia

Researchers have struggled to understand how deletion of the 22q11.2 region of the genome can increase the likelihood of neuropsychiatric conditions such as intellectual disability, autism spectrum disorder (ASD), and schizophrenia. Ralda Nehme of the Stanley Center for Psychiatric Research, Olli Pietiläinen, Kevin Eggan (now at BioMarin), and colleagues traced gene expression patterns in induced pluripotent stem cell (iPSC)-derived neurons from patient donors and ones they had gene-edited to include the deletion. They found that the loss of 22q11.2 impacted expression of ASD-associated genes in young iPSC-derived neuronal progenitor cells, and of schizophrenia-associated genes in more mature cells. Read more in Nature Communications.

Is it viral or bacterial pneumonia?

Determining whether a patient's pneumonia is viral or bacterial (and if bacterial, which bacteria) is a difficult but important task. Melodi Anahtar (Koch Institute), institute member Sangeeta Bhatia, and colleagues have developed nanoparticle sensors that can tell viral pneumonia from bacterial by probing the host's response to infection. Each sensor contains a unique reporter that is cleaved from the nanoparticle by response-specific immune-related proteases. In mice, the team could differentiate different forms of pneumonia by profiling the reporters excreted in urine. The technology could be leveraged for simple, paper-based pneumonia diagnostics. Learn more in PNAS and an MIT News story.

Getting the most out of antibody response studies

To develop new antiviral vaccines, researchers need a clear picture of how different antibodies interact with various viral strains. But the number of potential interactions is huge, making fully comprehensive screening impossible. In Cell Systems, Tal Einav (Fred Hutchinson Cancer Center) and Brian Cleary (now at Boston University) describe a “matrix completion approach” that uses patterns from a relatively small number of measurements to predict unmeasured interactions. By using data from large-scale flu and HIV-1 antibody studies, they show that their approach can effectively merge data from different studies, and can help researchers explore antibody responses at lower cost and in less time.

The ancestry of people who hail from Micronesia — a group of almost 2,000 remote islands in the southwest Pacific — has long been unknown. Senior associate member David Reich in the Program in Medical and Population Genetics and colleagues analyzed genomic data from DNA samples of 164 ancient and 112 modern people from the region and found evidence of five different migrations into Micronesia within the last 3,000 years. Three were from East Asia, one from Polynesia, and one was of a Papuan population associated with New Guinea, suggesting large amounts of previously unrecognized ancestral diversity in these remote islands. Read more in Science.

Genetic factors partly determine whether someone infected with Mycobacterium tuberculosis will develop tuberculosis (TB), but these factors differ between populations. Samira Asgari, institute member Soumya Raychaudhuri of the Program in Medical and Population Genetics, and colleagues looked for ancestry-specific factors by genotyping nearly 3,500 Peruvians, including patients with TB and infected household contacts who did not develop TB. They controlled for socio-demographic factors and found that a 10 percent increase in native Peruvian genetic ancestry proportion was associated with a 25 percent increase in TB progression risk. The researchers conclude that genetic ancestry is a major contributor to TB risk and emphasize the importance of studying diverse populations. Read more in Cell Genomics.

The function of thioredoxin/glutathione reductase (TXNRD3), a selenoprotein expressed in the testes, is unknown. To characterize the enzyme’s in vivo function, Metabolism Program associate member Vadim Gladyshev of Brigham and Women’s Hospital and Qianhui Dou (BWH/HMS) generated Txnrd3 knockout mice and showed that TXNRD3 deficiency leads to fertility impairment in male mice. Proteomic analyses further revealed a broad range of substrates reduced by TXNRD3 during sperm maturation, presumably as a part of sperm quality control. Their results show that TXNRD3 plays a critical role in male reproduction via the thiol redox control of spermatogenesis. Read more in the Journal of Biological Chemistry.