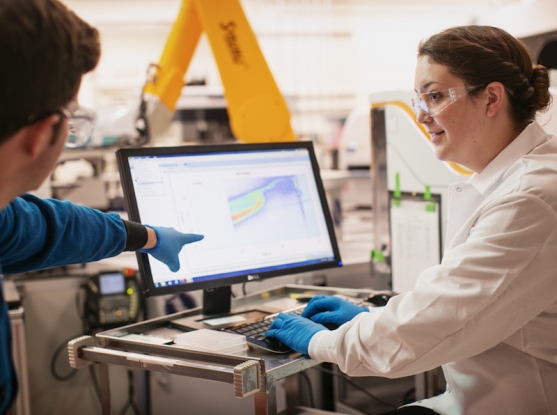 How stress turns hair gray, cancer drugs may be hiding in plain sight, and more.

Welcome to the January 24, 2020 installment of Research Roundup, a recurring snapshot of recent studies published by scientists at the Broad Institute and their collaborators.

The role of specific metabolites that influence the growth and physiology of gut bacteria in inflammatory bowel diseases (IBD) remain largely unknown. A team led by Infectious Disease and Microbiome Program’s Nadine Fornelos (previously postdoctoral researcher), associate member Curtis Huttenhower, research scientist Hera Vlamakis, and core institute member Ramnik Xavier, along with colleagues in the Metabolomics Platform, screened a panel of IBD-related microorganisms and metabolites. Reporting in Nature Microbiology, the researchers found that N-acylethanolamines (NAEs), a class of endogenously produced signaling lipids, which are typically elevated in IBD, have the potential to shift gut microbiota toward an IBD-like state. The study suggests NAEs may become a biomarker for IBD, with future therapies targeting NAE metabolism.

Fight or flight turns them white

Dozens of non-oncology drugs, originally developed for diabetes, inflammation, alcoholism, and even arthritis in dogs, can kill cancer cells, according to work led by core member and Cancer Program director Todd Golub, Drug Repurposing Lab founder Steven Corsello, and the Broad's PRISM and Dependency Map teams. They treated hundreds of cancer cell lines with thousands of compounds from the Drug Repurposing Hub and found nearly 50 that have surprising anti-cancer capabilities. Described in Nature Cancer, the work revealed novel drug mechanisms and targets, suggesting how to use existing drugs in new ways. Read more in Scientific American, The Boston Globe, Genetic Engineering and Biotechnology News, or a Broad news story.

Direct-to-participant recruitment and enrollment via the internet is an effective way to conduct genomic research, especially on rare diseases. However, institutional review boards and research ethics committees have been reluctant to approve this approach for international research because of concerns about its legality in other countries. Andrea Saltzman, director of human subjects compliance at Broad, and colleagues surveyed expert collaborators on the laws, policies, and guidelines from 31 countries to examine the ramifications of extending the direct-to-participant methodology to worldwide genomic research, using research into rare disorders as an example. Their report appears in The Journal of Law, Medicine & Ethics.

Boosting fetal hemoglobin (HbF) in sickle cell disease patients is a therapeutic strategy. During normal human development, a protein called BCL11A represses the HbF gene and regulates the switch from fetal to adult hemoglobin shortly after birth, but the mechanism of how BCL11A expression is regulated is unclear. Postdoctoral fellow Anindita Basak, former postdoctoral fellow Mathias Munschauer, institute director Eric Lander, associate member Vijay Sankaran, and their co-workers show that early in blood development, HbF expression is turned on because of an RNA-binding protein called LIN28B, which directly interacts with ribosomes and BCL11A mRNA to suppress the production of the BCL11A protein. Learn more in Nature Genetics and Boston Children's Hospital's Discoveries blog.

Associate member David Reich and his colleagues analyzed ancient DNA from four children who were buried in the Shum Laka site in modern-day Cameroon some 8,000 and 3,000 years ago. They used the data to build the first comprehensive model of deep African genetic history and reveal that all four individuals are most closely related to Central African hunter-gatherers, despite being from the hypothesized homeland of Bantu languages. This complicates theories about the beginnings of the Bantu language expansion, which is the primary source of ancestry in central, eastern, and southern Africa. Read more in Nature and coverage in Science and The New York Times.