Mapping the epigenome, the genetics of naps, Mediterranean diet and the microbiome, and more

Welcome to the February 12, 2021 installment of Research Roundup, a recurring snapshot of recent studies published by scientists at the Broad Institute and their collaborators.

Many researchers are searching for drugs that can degrade specific disease-causing proteins, but the screens they use can be prone to false positives. In Science Advances, Vidyasagar Koduri, Leslie Duplaquet, associate member Bill Kaelin, and colleagues present a new positive selection method to identify these protein degraders. This new method turns the protein of interest into a poison, so cells that degrade the protein can survive better than those that do not. In addition to reducing false positives, this allows researchers to use pooled approaches, such as CRISPR-based screens, to identify druggable pathways that can degrade their protein of interest.

The genetics of napping

Daytime napping is a heritable behavior, but the genetic basis is unclear. Hassan Dashti, Iyas Daghlas, associate member Richa Saxena (Massachusetts General Hospital) in the Medical and Population Genetics Program, and colleagues performed a GWAS using UK Biobank data and found 123 loci associated with self-reported daytime napping. Of those loci, 61 replicated in 23andMe data. Some of these were in genes linked to sleep disorders and those involved in regulating arousal. Clustering of genetic variants pointed to at least three potential mechanisms that promote napping, each with a distinct link to cardiometabolic health. Read more in Nature Communications and an MGH press release.

Carles Boix, associate member Manolis Kellis of the Epigenomics Program, and colleagues have published the most comprehensive map yet of human noncoding DNA called the EpiMap (epigenome integration across multiple annotation projects). EpiMap offers an in-depth annotation of human regulatory regions, their activity patterns across 833 tissues and cell types, their target genes, their upstream regulators, and the pathways they control. The researchers used this circuitry to propose candidate mechanisms of action for 30,000 genetic variants linked to 540 specific traits. Read more in Nature, an MIT news story, and Genetic Engineering and Biotechnology News.

Microbially modulating the health benefits of a Mediterranean diet

To better understand the relationship between the microbiome, diet, and cardiometabolic health, a team led by Daniel Wang (BWH) and Broad associate member Curtis Huttenhower analyzed data from 307 individuals about their microbiomes, long-term diet, and other physiological biomarkers. The researchers demonstrated that a Mediterranean-style dietary pattern is associated with modest shifts in the gut microbiome, but that its protective associations with cardiometabolic health vary significantly depending on the composition of the microbiota. These findings advance the concept of precision nutrition and have the potential to inform more effective and precise dietary approaches for disease prevention. Read more in Nature Medicine. 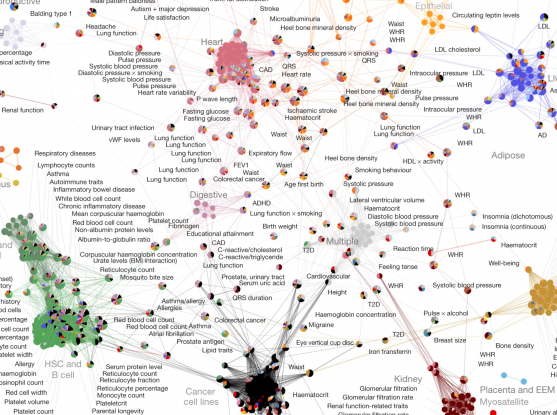