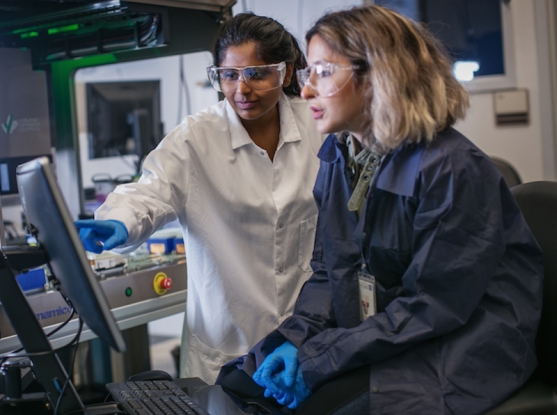 A skeletal mystery deepens, a cancer's composition becomes clearer, a stem cell goes on a special diet, and more.

Welcome to the August 23, 2019 installment of Research Roundup, a recurring snapshot of recent studies published by scientists at the Broad Institute and their collaborators.

A mutation in RABL3 may increase the risk of pancreatic cancer

Pancreatic ductal adenocarcinoma (PDA) is an aggressive cancer that can run in families, although the causative genes are mostly unknown. Using whole genome sequencing, Sahar Nassim, Metabolism Program associate member Wolfram Goessling at Brigham and Women's Hospital, and colleagues found a germline truncating mutation in RABL3, a RAS-family oncogene, in a family with PDA. Their work suggests that this mutation may increase cancer risk by affecting regulation of the RAS pathway, increasing cell proliferation. RABL3 mutations may be a target for genetic testing in families with a history of this disease. Read the full study in Nature Genetics.

Within a Himalayan pool called Roopkund Lake lie the bones of several hundred people, their identities and fates a mystery since their discovery decades ago. In Nature Communications, an international team led by Éadaoin Harney at Harvard University; Ayushi Nayak at Max Planck Institute for the Science of Human History; Douglas Kennett at University of California, Santa Barbara; Kumarasamy Thangaraj at CSIR Centre for Cellular and Molecular Biology; Niraj Rai at Birbal Sahni Institute of Palaeosciences; and Program in Medical and Population Genetics associate member David Reich at Harvard Medical School report that DNA from 38 of the lake's skeletons reveal that the remains represent at least three genetically distinct groups, interred in the lake over the course of a thousand years (as opposed to all at once). Read more in The New York Times, The Atlantic, and National Geographic.

Dietary nutrients are known to play a role in the maintenance of adult stem cells. However, little is known about how stem-cell generated metabolites coordinate cell function and physiology. To identify specific metabolic pathways, a team led by Chia-Wei Cheng, Moshe Biton, Adam Haber, core institute member and Klarman Cell Observatory director Aviv Regev, associate member Omer Yilmaz at MIT, and others, with help from the Genomics Platform, studied mouse intestinal stem cells (ISCs) that express the ketone-producing enzyme HMGCS2. Ketones provide energy to tissues during periods of low-energy states, such as fasting or prolonged exercise, and have also been implicated as signaling metabolites. Reporting in Cell, the researchers confirm that metabolites associated with a ketogenic diet improve ISC function and a glucose-rich diet has the opposite effects. Learn more in a press release from MIT.

A starring role for an immature cell

Institute member James Collins of the Infectious Disease and Microbiome Program and his team have made DNA hydrogels bend to their will, thanks to the programmable Cas12a enzyme. In a paper in Science, they show how they incorporated DNA into the structure of hydrogels. They then designed guide RNAs to get Cas12a to cleave the DNA in various ways, changing the behavior and properties of the gels. In one of several applications, the researchers used the Cas enzyme to release DNA-anchored compounds from a polyethylene glycol gel. Such CRISPR-responsive materials could be used in tissue engineering, molecular diagnostics, and bioelectronics. Read more in a story from Nature.