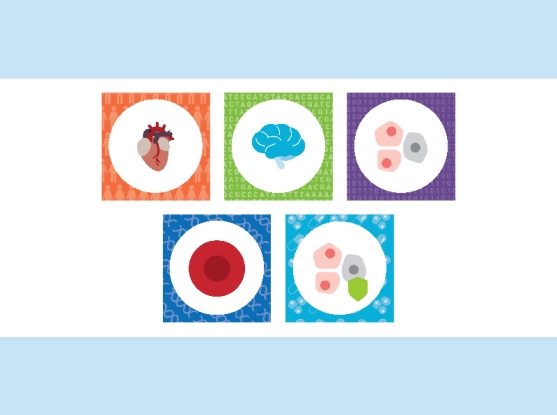 Welcome to the April 4, 2022 installment of Research Roundup, a recurring snapshot of recent studies published by scientists at the Broad Institute and their collaborators.

"Heart-healthy" drinking goes down the drain

Studies have suggested that light alcohol use can promote heart health. But in JAMA Network Open, Kiran Biddinger, the Cardiovascular Disease Initiative's Krishna Aragam, and colleagues suggest that any amount of drinking can raise heart disease risk. Using data from UK and Mass General Brigham biobanks, they showed that people who report light to moderate alcohol use have the lowest heart disease risk, but this is likely mediated by their generally healthier lifestyles. Using genetic epidemiology, they also found that low levels of alcohol consumption appear to raise heart disease risk modestly, but that risk increases exponentially as consumption goes up. Learn more in an MGH press release, a tweetorial by Aragam, and coverage in The New York Times.

Survival depends on the ability to learn from positive and negative experiences, a process that is mediated by a brain structure called the striatum and which is impaired in many neuropsychiatric disorders. To better understand the circuits involved, Bernard Bloem (MIT), associate member Ann Graybiel of the Stanley Center for Psychiatric Research, and colleagues monitored anterodorsal striatal neurons in mice during a foraging task. They found that neurons within clusters called striosomes encode information about behaviors' outcomes, becoming particularly active when an action's outcome was different than expected — a sign that they may help the brain adapt to unexpected circumstances. Learn more in Nature Communications and an MIT News story.

Immunotherapy has revolutionized the treatment of some cancers, but resistance to these treatments remains a major challenge. To identify tumor genes responsible for resistance, Julia Joung, core institute member Feng Zhang, and colleagues performed CRISPR activation gain-of-function screens on human melanoma cells, identifying four candidate genes that conferred resistance when overexpressed. The candidates included B3GNT2, which encodes a poly-N-acetyllactosamine (poly-LacNAc) synthase that adds poly-LacNAc to more than 10 tumor ligands and receptors. This disrupted interactions between tumor and T cells and reduced T cell activation and killing. Read more in Nature Communications and in a tweetorial from Joung.

​​A different role for Warburg?

When cells become cancerous, they reprogram their core metabolic pathways to focus on glycolysis, a phenomenon called the Warburg effect. While this can support cell division, a team supervised by Broad associate member Raul Mostoslavsky now describes this phenomenon in rare populations of non-dividing tumor cells in intestinal cancer. The researchers propose that the Warburg effect, in some cases, may also have evolved to protect cancer cells from lethal oxidative stress. The team also investigated the mechanisms by which metabolic reprogramming begins, providing insight into the tumor-initiating potential of intestinal cells. Read the full story in Nature Communications and an MGH press release.

Research Roundup: March 28, 2022
A path to promising treatments for schizophrenia