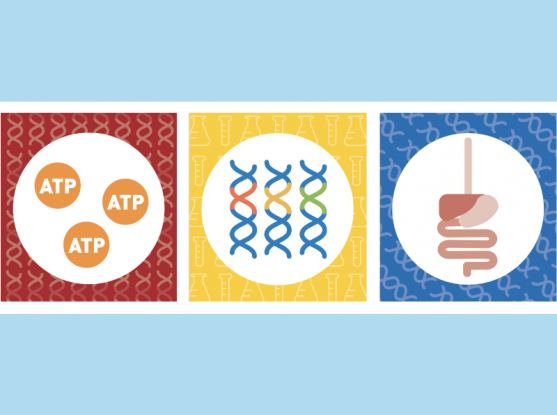 Welcome to the April 16, 2021 installment of Research Roundup, a recurring snapshot of recent studies published by scientists at the Broad Institute and their collaborators.

Go with the gut

Bacteria in the human microbiome can influence the host they colonize by synthesizing human signaling molecules, but the potential universe of molecules they produce is vast. A team led by Fang-Yuan Chang, institute member Christopher Voigt in the Cell Circuits Program and MIT, and others in the MIT-Broad Foundry combined bioinformatics with an in vitro assay to describe a class of gene clusters from Clostridia bacteria able to catalyze the formation of fatty acid amides (FAAs) that are either endogenous human FAAs or their structural mimics. The bacterial enzymes used diet-derived substrates to produce FAAs that interact with human G-protein coupled receptors. Read more in Nature Microbiology.

Link between energy metabolism and expression of the spliceosome

Human cells generate ATP through two main pathways, glycolysis and oxidative phosphorylation (OXPHOS). The balance between these programs varies across tissues and cell states and in response to environmental stimuli; moreover, it can be exploited for therapeutic applications. The molecular mechanisms governing this balance, however, remain unclear. Alexis Jourdain, institute member and co-director of the Metabolism Program Vamsi Mootha, Chris Burge (MIT), and colleagues report the genome-wide identification of OXPHOS repressors. The team found that these genes are related to pre-mRNA splicing. Their work connects for the first time the spliceosome –– specifically, subunits of the U1 snRNP, such as LUC7L2, which is frequently deleted in some leukemias –– and energy metabolism. Read more in Molecular Cell.

To uncover where genes are expressed within cells or tissues, researchers label RNA with fluorescent probes and image at high magnification. However, constraints on resolution and available probe colors limit the number of genes and the size of the tissue that can be analyzed. In Nature Biotechnology, Broad Fellow Brian Cleary, Brooke Simonton, Jon Bezney, Eric Lander (on leave), core institute member Fei Chen, core institute member Aviv Regev (now at Genentech), and colleagues developed Composite In Situ Imaging (CISI), which measures composite signals in place of individual genes and images cells at lower resolution. Researchers then use machine learning to infer which signals correspond to which genes, leveraging existing knowledge about how genes regulate one another. Read more in a Broad feature story.