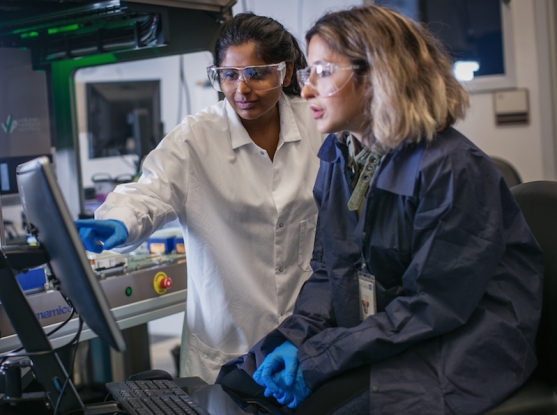 Welcome to the April 12, 2019 installment of Research Roundup, a recurring snapshot of recent studies published by scientists at the Broad Institute and their collaborators.

Clear-cell carcinomas (CCCs), which are often resistant to anti-cancer therapies, have a unique metabolic state that remains to be targeted therapeutically. A team led by postdoctoral scholar Yilong Zou and core institute member Stuart Schreiber in the Chemical Biology and Therapeutics Science Program mined data from the Cancer Therapeutics Response Portal, and found that CCC cells are dependent upon glutathione peroxidase 4 (GPX4) and are prone to undergo ferroptosis, an iron-dependent, non-apoptotic cell death. By combining genome-wide CRISPR screening and lipidomic profiling, they discovered that GPX4-dependency in CCC cells is driven by the HIF-1/2α - HILPDA axis via enrichment of polyunsaturated lipids. Described in Nature Communications, the findings shed light on the ferroptosis pathway and suggest novel treatment avenues for CCC patients.

Hospital-acquired infections are often antibiotic-resistant and difficult to control. Associate member Michael Gilmore, postdoctoral scholar Daria Van Tyne, group leader Abby Manson, institute scientist Ashlee Earl and colleagues from the Infectious Disease and Microbiome Program examined the genomes of archived Enterococcus faecalis bacteria, which caused one of the first sustained hospital outbreaks of a multidrug-resistant infection from the early- to mid-1980s. Reporting in Science Translational Medicine, the team identified mutations in the bacteria that emerged as they caused infections over four years. The mutations help explain how the microbes outsmart the immune system and resist treatment, and suggest new targets for the next generation of antibiotics. Read more in The Atlantic and GenomeWeb.

A vulnerability spanning many cancers

A large number of colorectal, gastric, ovarian, and endometrial cancers share a mutation pattern called microsatellite instability (MSI). Postdoctoral scholar Edmond Chan, research scientist Tsukasa Shibue, the Cancer Dependency Map (DepMap) project’s associate director Francisca Vazquez, associate member Adam Bass of the Cancer Program, and other members of the DepMap team report in Nature that most MSI-harboring cell lines from these cancers depend on one gene, WRN, to survive and thrive — a discovery validated by similar findings from the Wellcome Sanger Institute. No drugs currently exist against this gene, but the two teams' data suggest that it should be an attractive target for therapeutic development. Learn more in a Broad news story, FierceBiotech, and Nature News & Views.

Glioblastoma (GBM), a malignant brain tumor in adults, is one of the most aggressive cancers, with a median survival of around 15 months despite treatment. Tumor-associated macrophages (TAMs), a type of white blood cell, play an important role in the immune response to cancer ― the mechanism of which is not completely understood. A team led by associate member Francisco Quintana of the Metabolomics Platform found that kynurenine, a metabolite produced by GBM cells, participates in the control of TAMs by activating AHR, a protein that controls gene expression. These findings, published in Nature Neuroscience confirm that AHR expression in TAMs regulates the immune response in GBM, suggesting  a target for future therapeutic interventions.