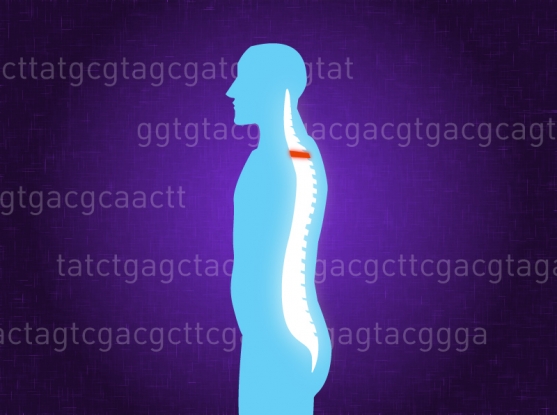 Chordoma is literally a one in a million cancer, with few effective treatment options. A new understanding of the biology behind this tumor type is bringing novel opportunities to light.

A partnership pairing scientists from several research centers and a nonprofit organization dedicated to a rare cancer is starting to bear fruit, according to a study published in Nature Medicine. The study — a combination of genetic and small-molecule experiments in cell-line and animal models — reveals a potential molecular workaround for treating chordomas, a family of tumors of the spine, sacrum, and the base of the skull, using therapies that indirectly interfere with these tumors' defining genetic flaw.

Every year, chordomas appear in about one out of every million people. These cancers are thought to arise from cells left over from the notochord, the rod of tissue that in embryos acts as a fledgling spinal column. Chordoma patients typically undergo surgery and radiation, but the tumors often come back after treatment.

Chordoma and notochord cells share a distinguishing feature: high expression of a transcription factor called brachyury. Brachyury is active primarily in embryonic cells, suggesting that chordomas may form because the factor persists or reactivates in adult cells when it should remain silent.

Lacking systematic knowledge of chordoma's genetics, however, scientists were unsure of brachyury's true biological importance. What was needed was a full list of chordoma's genetic dependencies — the genes the tumor needs to survive, which represent vulnerabilities that could provide deeper insight into cancer biology as well as tractable treatment targets.

"This work required expertise across a spectrum of fields: genetics, chemistry, epigenetics, and chordoma biology," said Sharifnia, who works in the Schreiber laboratory and the Broad's Chemical Biology and Therapeutics Science Program. "We were fortunate to have collaborators in each of these areas come together and contribute to the study."

Simultaneously, the team screened nearly 460 small-molecule compounds in chordoma cells, looking for additional hints about the tumor's biology. Some of the most effective compounds in their survey interfered with a set of transcriptional cyclin-dependent kinases (CDKs) — enzymes that help police gene transcription — called CDK7, CDK9, CDK12, and CDK13. Supporting these findings, the genes for three of those enzymes were also high on chordoma's genetic dependency list. 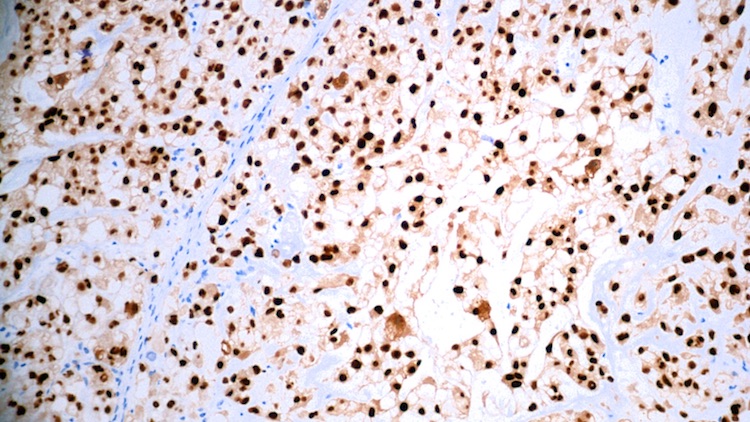 Cells from a chordoma model, stained to reveal the presence of brachyury. (Credit: Chordoma Foundation)

The four highlighted CDK enzymes play active roles in regulating gene activity, and tend to gather at and around super-enhancers: large, dense clusters of non-coding, gene-regulating DNA that influence entire programs of gene expression. And when the team mapped chordoma's regulatory genome, they indeed found a large super-enhancer overlapping brachyury's own gene, T.

"Finding the T-associated super-enhancer was exciting because it revealed a potential mechanism for how chordoma cells regulate brachyury," Sharifnia said. "It also gave us an idea of how we might approach brachyury as a therapeutic target."

Transcription factors like brachyury are exceedingly difficult to counter directly. However, chordoma's reliance on brachyury and the transcriptional CDK enzymes, and their convergence around this key super-enhancer, raised a tantalizing question: Could transcriptional CDK-targeting drugs — of which a few are already in clinical trials — treat chordoma, by keeping the cells from producing brachyury in the first place?

Cell-line and animal model tests pointed to yes, with a chemical compound called THZ1 (which blocks CDKs 7, 12, and 13) significantly shrinking tumors in mice with chordoma. The findings, if validated in additional studies, suggest that THZ1 or similar drugs could be valuable options for treating chordoma patients.

"Our studies provide a first comprehensive view of chordoma's biology and vulnerabilities," said Schreiber. "These insights, coupled to advances in chemical biology, provided probe compounds, which we think could be a powerful step towards therapeutics that can benefit chordoma patients, especially those with advanced-stage disease."

Sharifnia points out that chordoma patients' deep and enthusiastic involvement at every point in the study was a key factor in the team's success.

"This study was possible because chordoma patients and their families not only supported the work but had a voice in the scientific direction we took, one that we all hoped could lead to rapid clinical translation," she explained. "They joined our scientific meetings and spent time with us at the Broad. Their participation in the project taught us that scientists and patients make great allies when it comes to the study of a rare cancer."

"These results not only resoundingly confirm that brachyury is the Achilles’ heel of chordoma, but reveal a promising approach to attack it with drugs already in the clinic," said Josh Sommer, a chordoma patient, director of the Chordoma Foundation, and an author on the Nature Medicine paper. "That is a real reason to be hopeful, and a victory for everyone who contributed to this project."

Support for this study was provided by the Chordoma Foundation, the National Cancer Institute, Cancer Research UK, and other sources. Stuart Schreiber is a Howard Hughes Medical Institute Investigator. 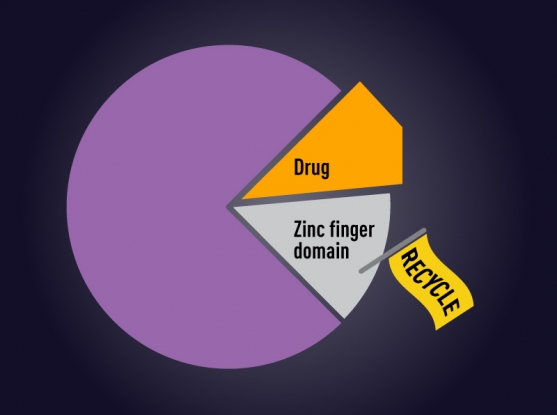