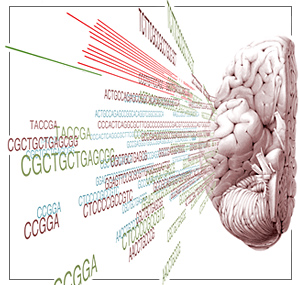 The delusions and hallucinations of schizophrenia can be devastating for the 1% of the population struck by the disease. The condition clearly has a genetic component, evidenced by its tendency to run in families. However, the search for specific genes or chromosomal regions involved has led to few reproducible findings.

Results published today in Nature by a multinational consortium include some of the first definitive genetic links to schizophrenia and help to define the diversity of DNA changes that contribute to the disease. Led by scientists from the Stanley Center for Psychiatric Research at the Broad Institute of Harvard and MIT, in collaboration with 10 other institutes in Europe and the USA, the research team discovered that schizophrenic patients were more likely to possess rare, structural changes in their genomes than people without schizophrenia. In addition, changes at two new sites in the genome were identified as risk factors, bringing the total number of solid genetic links to the disorder to three and confirming that this type of variation may help unravel schizophrenia. The study is the largest and most complete genome-wide investigation of the disorder to date.

Before this new work, previous genetic association studies of schizophrenia had not produced strong, consistent, and unambiguous findings. In 2006, a group of investigators got together and realized that, collectively, their thousands of samples held the statistical power to reveal genetic links that the studies could not reveal alone. The scientists formed a new research team known as the International Schizophrenia Consortium (ISC), which is led by Pamela Sklar, senior associate member of the Broad Institute and associate director of the Psychiatric and Neurodevelopmental Genetics Unit in the Center for Human Genetics Research at Massachusetts General Hospital (MGH). Sklar is also director of genetics at the Stanley Center, which provided the major funding and research resources for the current work.

“The consortium should be recognized for taking the important first step towards unearthing the full underlying genomic architecture of schizophrenia and other psychotic disorders,” says Edward Scolnick, director of the Stanley Center. “Only by doing such a large study could we have uncovered these stunning findings to such a high degree of confidence, thus setting the stage for an even more complete understanding of the full genomic contributions to disease.”

Cutting-edge genotyping and analysis tools have given researchers the ability to study disease genetics on a large scale. “In this second generation of medical genetics, we can use new genomic technologies to look at thousands of patients at a much finer resolution than ever before,” said Jennifer Stone, the study’s lead postdoctoral fellow who worked closely with Sklar and Shaun Purcell, the study’s senior analyst, on all aspects of the new work.

To conduct this large study, the consortium researchers assayed DNA samples totaling 3,391 individuals with schizophrenia and 3,181 unrelated individuals without the disorder. DNA samples were sent to the Broad for genotyping and analysis, using genomic technologies and novel analytical techniques developed at the institute and at MGH. Taking an approach that used high-density DNA microarrays and sophisticated analysis methods, the team looked for rare instances in which sections of DNA are deleted or duplicated, so-called copy number variants or CNVs, and tested whether those instances were likely to play a role in the disease.

The team identified three deleted regions in the genome linked to schizophrenia, including an area on chromosome 22 observed in earlier studies. The other two deletions, though, had not been previously implicated in the disease. Large sections of DNA on chromosomes 1 and 15 were missing more often in patients with schizophrenia than in controls. Moreover, in a study appearing in the same Nature issue, a team of researchers led by scientists at deCODE Genetics found that the same three deletions conferred risk for the disorder, signifying a major step forward in schizophrenia genetics. “It is encouraging that both research teams identified these same genomic sites,” said Broad associate member Shaun Purcell, who is an assistant professor of psychiatry at Harvard Medical School and senior analyst on the new study.

In addition to identifying distinct genetic risk factors, the team suspected that the overall level of rare copy number changes — both extra and missing DNA — might differ between cases as a group and controls as a group. This “CNV burden” can be measured either by counting the total number of missing or extra DNA segments in the genome or by counting the number of genes those segments intersected.

Both measures of burden were found to differ — cases showed a 1.15-fold higher rate of CNVs than controls, and the “gene count” burden was even higher at 1.41-fold. As genes are the major functional units of DNA, it is perhaps not surprising that CNVs that alter genes have a more pronounced effect versus those that do not.

“In light of these new findings, there no longer needs to be an argument that this type of variation plays a role in some of the risk,” said Sklar. “The task now is to understand how rare structural variation, together with other kinds of genetic variation and environmental effects, work together to produce schizophrenia.”

Sklar adds that the work was made possible by the consortium’s collaborative efforts and by the resources and funding provided by the Stanley Center and the Broad Institute. The new findings are some of the first successes to come out of the Stanley Center, established in early 2007 through a $100 million grant from the Stanley Medical Research Institute. The center was created to combine the power of genomics and chemical biology in an effort to improve the understanding, diagnosis, and treatment of bipolar disorder, schizophrenia, and major depression. “This wonderful framework has enabled the development of new tools and made them rapidly available,” Sklar said.

Also critical to the success of this unprecedented study are the analytical tools developed by Shaun Purcell and other researchers at the Broad and MGH, such as PLINK, an analytical tool for associating genomic data with disease that is now used worldwide by genomic researchers. “PLINK is not only crucial to our studies of psychiatric genetics, but because it and other analysis tools are made publicly available, they are becoming the international standard for whole-genome studies,” said Sklar.

Other scientists in the Broad community, especially lead research technician Kimberly Chambert and members of the Broad Institute’s research platforms, also contributed greatly to the success of this high-quality, complicated, and large-scale genetics project, said Sklar. In particular, members of the Biological Samples Platform, led by Kristin Ardlie, and the Genetic Analysis Platform, led by Stacey Gabriel, helped to rapidly produce the massive amount of data required for this study.

In total, more than 6,000 large, rare copy number variants were identified. Because rare deletions and duplications were also found in controls, albeit at a lower frequency than in cases, the genetic changes that are truly risk factors have yet to be clearly identified. “Just observing one of these events in a patient does not in itself tell you anything about the role of that particular variant in causing that person’s disease,” said Purcell. Further studies will be necessary to understand which variants are disease-causing and, in larger variants that contain many genes, which specific genes are disease-related.

“With these tools in hand,” said postdoctoral fellow Stone, “we now have a strong foothold into the genetic architecture of this psychiatric disease.” Scolnick adds that while these new genetic links are indeed remarkable, they are truly the first steps towards revealing how genetic variation contributes to the risk of developing schizophrenia. Additional work over the next several years will be needed to fully expose and understand the genetic underpinnings of this complex disease.

The International Schizophrenia Consortium is part of the larger Psychiatric Genome-wide Association Study Consortium, which seeks to rapidly analyze the tens of billions of genotypes generated for five central psychiatric disorders — autism, attention-deficit hyperactivity disorder, bipolar disorder, major depressive disorder, and schizophrenia. In addition to enabling large-scale studies of each disorder individually, consortium members will be searching for risk factors that span multiple diseases, potentially revealing unique perspectives into the genetics of psychiatric diseases as a whole.