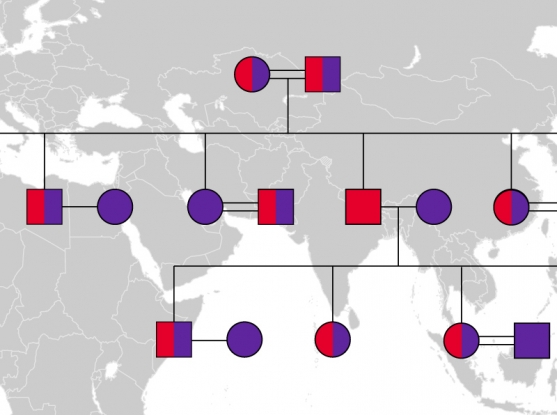 The Human Genome Project mapped nearly 20,000 genes; now, researchers have identified individuals with natural gene-disrupting mutations (so-called “human knockouts”) and systematically studied the biological consequences. The project provides a framework for using naturally-occurring genetic variation to gain insight into the function of each gene in the human genome.

Identifying the function of every human gene is a key goal in medicine to illuminate what goes awry in disease or promotes health, but of the estimated 20,000 genes in the human genome, scientists still only know what a fraction of them do. In an international collaboration published in Nature, researchers from the Broad Institute of MIT and Harvard, University of Pennsylvania, University of Cambridge, and the Center for Non-Communicable Diseases in Pakistan analyzed a Pakistani population in which relatives frequently intermarry to find humans with rare gene-disabling (“knockout”) DNA mutations and determine the consequences for health and disease.

In Pakistan, marriages between closely related individuals have been customary for generations, and children from such unions are more likely to inherit two disabled copies of a gene. This study, with a cohort of more than 10,000 individuals, is one of the first to look in detail at such a population and the effects of these mutations. More than 1,300 genes were completely knocked out in at least one individual, allowing the research team to investigate the outcomes of complete gene-function loss.

The researchers showcase one particular knockout mutation in APOC3, a gene previously found responsible for maintaining dietary fat in the blood. The team identified a family with both copies of APOC3 disabled, and showed that these individuals are able to clear fat from their bloodstreams much more quickly than relatives who retained functional copies. When combined with an earlier report indicating that lacking one copy of APOC3 leads to lower risk for heart attack, these data suggest that a medicine developed to mimic these APOC3 knockout mutations could prevent heart attacks.

“The Human Genome Project provided a list of ‘parts’ — genes — that compose the genome, but now we’re in a position to directly understand what it means for humans to be missing one of these parts,” says co-senior author Sekar Kathiresan, an institute member and co-director of the Medical and Population Genetics Program at the Broad Institute and director of the Center for Genomic Medicine at Massachusetts General Hospital. “We’re really at a new era in genetics where we have the analytical and sequencing power, and access to the people who naturally lack these genes, to make this a reality.”

“This Pakistan-based resource has formulated the basis of a ‘human knockout program,’ through which we will systematically evaluate the underlying biology of genes and help inform therapeutic programs by calling back and conducting deep phenotyping studies in human knockouts,” says Danish Saleheen, an assistant professor of epidemiology and biostatistics at the Perelman School of Medicine at the University of Pennsylvania and co-first author on the paper.

Traditionally, scientists study gene function using model systems: Delete a gene in a mouse or a zebrafish to render the corresponding protein nonfunctional, and watch what happens to the animal. But those data don’t always correspond well to humans, underscoring the need for direct studies of the human biology — so the current study focused on people with naturally disrupted genes.

Saleheen first helped to organize a cohort in his native Pakistan to study the genetic risk of heart disease. Participants provided blood samples for exome sequencing and analysis of more than 200 traits such as cholesterol and insulin levels. But in the sequence data from the first few thousand participants, the researchers noted a large number of knocked-out genes, and pivoted to study the consequences of these genetic variations. All sequencing was performed at the Broad Genomics Platform sequencing center, and the variants identified are publicly available in the Broad’s Exome Aggregation Consortium database.

Previous human cohort studies have generated lists of potentially disabled genes in participants, but the team went a step further in the current study, correlating the nonfunctional genes with the physiological measurements. Within the cohort, the researchers found 1,317 genes where at least one person had both of their copies disabled. Roughly a third of these disabled genes existed in two or more people, allowing for further analysis, and the team determined that seven of the disrupted genes were associated with at least one of the measured traits.

Most notable was a family in which the parents, who were first cousins, both had two disabled copies of the gene APOC3. The research team returned to this family for clinical evaluation and found that those without a working version of APOC3 cleared dietary fat from their blood at a faster rate than other relatives could with one or two functional APOC3 genes. The natural power of APOC3-disabling mutations to lower this risk factor for heart disease could be a boon for preventative therapies, following the roadmap laid out by study of a different gene called PCSK9: In 2005, a group of researchers reported that a nonfunctional version of PCSK9 was associated with lower blood cholesterol, and a year later, researchers described an adult woman with two non-functional copies of PCSK9 — indicating that humans could tolerate complete loss of this gene. Such observations eventually led to development of medications that block PCSK9, and these medications are now approved by the U.S. Food and Drug Administration to lower blood LDL cholesterol.

“This research provides a framework that could be scaled up to establish a global ‘human knockout’ project: scouring populations for humans with naturally-occurring knockout mutations, and determining the range of physical consequences stemming from that gene-function loss to better understand the genome,” says co-first author Pradeep Natarajan, an associated scientist at the Broad Institute and postdoctoral research fellow in Kathiresan’s lab.