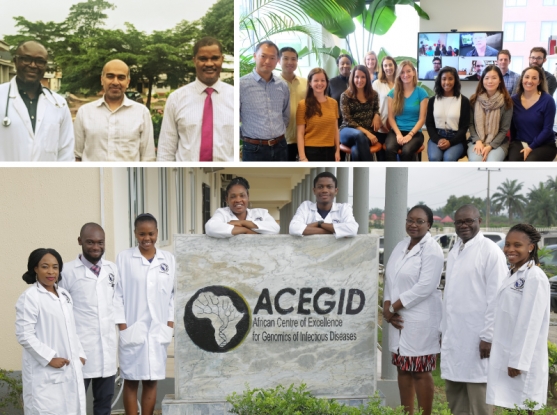 As a result of years of collaborative investment in training Nigerian scientists, genomic information about Lassa virus enabled public health officials to make real-time management decisions during the 2018 outbreak

Mounting a collaborative, real-time response to a Lassa fever outbreak in early 2018, doctors and scientists in Nigeria teamed up with researchers at Broad Institute of MIT and Harvard and colleagues to rapidly sequence the genome of the deadly virus. Genomic information about the virus’s properties was crucial to helping local public health officials make management decisions during the outbreak.

The speed and precision of the response was enabled by the local laboratory infrastructure for genome analysis — a result of years of collaborative effort between these teams to support and train Nigerian scientists.

A report of the data is published today in the New England Journal of Medicine, with lead authors from the African Center of Excellence for Genomics of Infectious Disease (ACEGID) at Redeemer’s University, Broad Institute of MIT and Harvard, Harvard University, and Irrua Specialist Teaching Hospital.

“The initial outbreak data, critical to managing the healthcare situation, were generated locally in Nigeria and immediately shared with the right officials earlier this year,” said co-senior author Christian Happi, director of ACEGID and professor of biology at Redeemer’s University. “We were grateful to be able to support the public health effort. Our local genomics sequencing capacity has been built up over the last several years with our collaborators at the Broad Institute, and these events were the first demonstration of our response during an outbreak.”

Lassa fever is a viral hemorrhagic illness, endemic to West Africa, that causes tens of thousands of cases and kills thousands of people each year. Nigeria’s unprecedented increase in Lassa fever cases in 2018 led to an outbreak declaration by the Nigeria Centre for Disease Control (NCDC) and the World Health Organization.

Public health officials, clinicians, and researchers initially feared that the surge in cases might be caused by a new strain of the virus. Normally, Lassa virus infects people mostly through environmental exposure, rather than human-to-human transmission. Any change in the virus’s potency or transmission route could have accounted for the surge, posing new risks to the population.

“Looking back at Ebola, for example, there was a lot of human-to-human transmission, and that will impact how a healthcare setting is managed,” explained co-senior author Bronwyn MacInnis, associate director of the malaria and viral genomics areas of Broad’s Infectious Disease Program. “We don’t want other patients or medical personnel to get infected. And on the other hand, if the risk of human-to-human transmission is very low — like it is normally for Lassa — then that needs to be communicated so patients won’t be afraid to go to the hospital.”

Determining the answers was key to mobilizing the public health response to the emergency. Genomic analysis of infected patient samples can provide this information, as seen during previous outbreaks such as Ebola and Zika virus.

Researchers from Irrua Specialist Teaching Hospital and Redeemer’s University in Nigeria rapidly collected and analyzed patient samples during the height of the outbreak. In March, scientists at Irrua Hospital — one of the major diagnostic centers in Nigeria where samples are referred for testing — sent confirmed Lassa samples to Redeemer’s University, where ACEGID teams immediately began sequencing.

Genomic data from 14 initial samples revealed that the virus’s potency and infection route were similar to previous seasons, and the risk of hospital-acquired infection was not higher than normal. The outbreak was likely driven by ongoing transmission from the environment, according to the analysis.

This information was relayed to NCDC officials in real time and reinforced their decision to maintain standard hospital practices during the outbreak. The viral sequence data was also shared openly with the scientific community. Subsequent sequencing at the Broad Institute of 206 additional Lassa virus samples, including 91 samples collected during previous seasons, further supported the findings.

The reason for the unprecedented increase in cases remains unknown, according to the research teams, but could involve changes in the local rodent population or reflect improved surveillance and heightened public health awareness. “There may be no one single explanation for the outbreak,” said co-first author Katherine Siddle, postdoctoral fellow at the Broad Institute and Harvard University. “The genomics information was able to give us insight into the top concerns, but there are outstanding questions remaining.”

“Swift and multi-pronged approaches to disease management, as was possible this year in Nigeria, are critical during outbreaks,” added co-senior author Pardis Sabeti, an institute member at Broad, professor at Harvard University, and Howard Hughes Medical Institute scholar. “That’s only possible through collaborative investment in genomics laboratories. In this case, local labs rapidly sequenced the initial Lassa fever samples to obtain crucial information, and then Broad was able to support the effort at scale. We envision a wide strategy for outbreak response, in which locally generated data is quickly integrated with traditional epidemiology to understand a public health threat.”

This project was supported in part by the National Institute of Allergy and Infectious Diseases (U19AI110818, R01AI114855, U19AI115589, R44AI115754, and U19AI135995), the National Human Genome Research Institute (U01HG007480 and U54HG007480), the World Bank, and the Bill and Melinda Gates Foundation. This effort was also supported through a partnership with the Joint West Africa Research Group, a Department of Defense initiative.