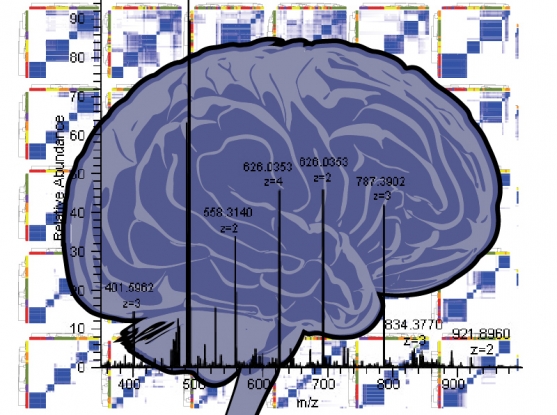 Credit : Courtesy of Broad Institute, based on work by somersault1824
By Leah Eisenstadt

Two patients with the same kind of tumor can have very different experiences. One patient’s cancer may progress quickly while the other grows slowly. Treatments may shrink tumors or have no effect at all. And some patients survive while others don’t. Efforts to profile tumors at the DNA, RNA, or epigenetic levels have revealed subtypes of tumors that help oncologists diagnose and prognose cancer, but it’s often unclear how to turn that molecular knowledge into new therapeutics.

This problem is especially acute for cancers with no clear genetic cause like medulloblastoma, a pediatric brain tumor with toxic treatments and unpredictable outcomes. A new effort to look beyond the genome and analyze the tumor’s proteins – the functional players of the cell – has revealed previously unrecognized subtypes of medulloblastoma that could be relevant in the clinic.

Led by scientists at the Broad Institute of MIT and Harvard, Boston Children’s Hospital, and MIT, the study combined clinical, technical, and bioinformatic expertise to show that “multi-omic” approaches aimed at not just genetic material, but also proteins and their modifications, can discover new biomarkers or drug targets.

“We have known since the early days of molecular biology that critical regulatory events take place after genes are transcribed into proteins,” said Ernest Fraenkel, a co-senior author of the new paper, an associate member of the Broad Institute, and professor of biological engineering at MIT. “It’s always been a high priority to look for these events in cancer.”

The researchers describe their findings in Cancer Cell. They have also generated a rich dataset and shared it with the scientific community.

The samples were sent to a team in the Broad Institute Proteomics Platform, led by co-senior author and platform senior director Steven Carr. With leadership from co-first author Filip Mundt, the team used a workflow developed at the Broad to perform global measurement of the tumors’ proteins, as well as several ways in which proteins can be modified in the cell after they’re made, such as phosphorylation and acetylation. This proteomics data was then integrated with global measurements of the DNA and RNA by Broad proteomics computational scientists DR Mani and Karsten Krug in collaboration with the German Cancer Research Center.

“Recent advances in proteomic technology, especially with respect to analyses of modifications like phosphorylation, enabled us to conduct one of the most comprehensive proteomic studies of medulloblastoma to date, giving us a deeper view of this disease than we could get using genomic methods alone,” said Carr.

Although only a few dozen samples were tested, the results include hundreds of thousands of diverse measurements. This complex dataset was analyzed by a team of computational biologists led by co-senior author Jill Mesirov, a Broad senior institute fellow and professor of medicine at UC San Diego School of Medicine, and Ernest Fraenkel.

“Adding data on proteins and their modifications allowed us to see differences in medulloblastoma tumor sub-groups that we can’t see through RNA analyses,” said Pomeroy.

The data showed that group-3 tumors can be divided into two subtypes, including one that is driven by mutations related to the MYC oncogene and has very poor prognosis.

Proteomic analysis of SHH tumors showed different sets of activated pathways. One subtype was strongly driven by the sonic hedgehog pathway, and the other not as much.

To help interpret the data, Fraenkel and co-first author Tobias Ehrenberger led development of a new approach to predict key regulatory proteins that caused changes seen in the proteomic data. Dubbed “kinome analysis,” the methods led them to discover a protein, PRKDC, that when inactivated made one subtype of the tumors more sensitive to radiation treatment.

“Kinome analysis suggested potential therapeutic avenues for type 3 medulloblastoma, a subtype that is known to have poor outcomes — namely, a target that may sensitize tumor cells to radiation,” Pomeroy said.

“Patients with medulloblastoma need better treatments,” said Fraenkel. “We hope that insights from this study may lead to therapeutic strategies that result in fewer long-term side effects.”