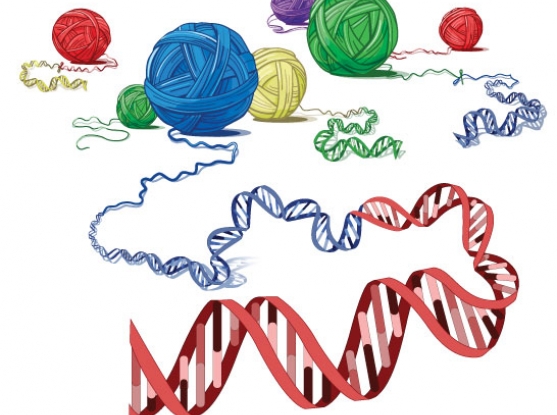 Fifty years ago, Philadelphia researchers peered through a microscope at cells from a patient with leukemia and made a startling discovery: they saw an abnormally shortened chromosome, the result of two chromosomal pieces breaking off and swapping places in these cancer cells. The sighting of this shuffling – known as a genomic rearrangement or translocation – would lead to a landmark cancer drug tailored to patients whose tumors harbored this genomic alteration.

This week, a research team led by scientists at the Broad Institute, Dana-Farber Cancer Institute and Cornell Weill College of Medicine report in Nature that they have uncovered an even more complex series of such translocations in prostate cancer, a discovery revealed not through the lens of a microscope but through a technique known as whole genome sequencing. These rearrangements in turn have cast a spotlight on genes that may be playing an important role in prostate cancer.

“Many of these features were invisible before,” said co-senior author Levi Garraway, a senior associate member of the Broad Institute and a medical oncologist and assistant professor at the Dana–Farber and Harvard Medical School. “Now, we’re realizing that by sequencing whole genomes in prostate cancer, there’s a lot more to see. These discoveries are teaching us a great deal about prostate cancer biology that we simply hadn’t appreciated previously.”

Prostate cancer is the second most lethal cancer in American men, responsible for more than 30,000 deaths and more than 200,000 new cases each year. A major goal of prostate cancer research is to identify potential drug targets as well as genetic characteristics within tumors that could distinguish indolent and aggressive forms of the disease, and ultimately improve diagnostics and treatment.

Whole genome sequencing enables researchers to look across the entire genome of a tumor to see global changes and patterns. Analyzing and sequencing a full cancer genome is a major technical feat – to date, most whole genome sequencing projects in cancer have examined a single tumor sample. In the prostate cancer study, however, researchers laid bare the full genetic blueprints of seven tumor samples, comparing each to a normal genome from the same person.

“This was the first study in prostate cancer in which whole genome sequencing has been performed on multiple genomes,” said co-first author Michael Berger, who worked on the project as a Cancer Program research scientist. “In dong so, we’ve identified novel aspects of prostate cancer biology.”

Other sequencing methods that target specific sections of the genome allow researchers to see smaller changes, such as point mutations in which one chemical letter of DNA is changed. Imagining the genome as text, these kinds of mutations are like spelling errors. Whole genome sequencing allows scientists to detect these misspellings as well as the rearrangement of whole paragraphs or pages of genomic text.

“One of the big surprises is the fact that prostate cancer doesn’t have a large number of misspellings, but instead has a large, significant number of rearrangements,” said co-senior author Mark Rubin, a genitourinary pathologist and professor in pathology and laboratory medicine at Weill Cornell Medical College. “We would never have guessed that there were so many genomic alterations of this type before now because we didn’t have the right tools to look for them.”

Using this sequencing approach, the researchers were able to see instances where chromosomes have been taken apart and put back together again in the wrong way. “It looks as though a bunch of breaks have been introduced on different chromosomes, and when the DNA repair machinery tried to repair these DNA strands, pieces got swapped, and attached to the wrong partners,” said Michael Lawrence, a co-first author and Broad computational biologist. “In the case of some of these rearrangements, we see a closed cycle of translocation in which no material has been lost – just sort of scrambled.”

This scrambling can lead to the creation of “fusion proteins,” the result of two genes becoming joined together. In the case of the Philadelphia chromosome, the fusion of two genes permanently turns on a protein that signals cells to grow, leading to chronic myelogenous leukemia (CML). Twenty years after this gene fusion was discovered, scientists developed a drug known as imatinib (sometimes called Gleevec), which binds to and thereby deactivates this abnormal protein. The story of this discovery has inspired modern cancer research.

Rubin, who is also a pathologist at NewYork-Presbyterian Hospital/Weill Cornell Medical Center, and his colleagues helped discover another gene fusion – TMPRSS2-ERG – in prostate cancer a few years ago. Just as in the case of the Philadelphia chromosome, TMPRSS2-ERG forms when two chromosomes swap pieces. In the latest study, researchers have found genomic swapping of even greater complexity. Instead of two pieces of genetic material getting swapped, many pieces are involved in a series of interchanges.

These breaks and repairs fall at the sites of some genes known to play a role in cancer. Several tumors contained rearrangements disrupting genes that had not been associated with prostate cancer before, such as the gene that codes for the protein CADM2, part of a family of proteins that prevent tumors from forming (known as “tumor suppressors”). Three samples also contained mutations involving members of the heat shock protein family, molecules that play an important, protective role and keep proteins from losing their proper shape. Anti-cancer drugs that inhibit these proteins are currently in clinical trials, but it is not yet clear whether prostate cancers will be vulnerable to such drugs.

Other recurring genomic rearrangements involve the genes PTEN and MAGI2. PTEN is a well-known tumor suppressor gene and MAGI2 appears to be its helpmate; mutations to one or both genes may set cells on the path toward becoming cancerous. Drugs that inhibit the pathway these genes influence are also being developed, raising the possibility that the drugs could be applied to prostate cancer.

The discovery of these alterations was made possible through the development of new computational tools, the careful collection and selection of tumor samples, and collaborations across institutions and across groups at the Broad. Garraway’s group continues to work closely with Rubin’s to follow up on genes of interest and sequence additional samples. The researchers also received help from many of the Broad’s platforms.

“This whole project was a collaboration that cut across the entire Broad,” said Berger. “The Biological Samples Platform, Genetic Analysis Platform, Genome Sequencing Platform and their informatics group, Cancer Program leadership, and the scientists and project management in the Cancer Program all shared the same vision on this project.”

From the BroadMinded Blog: What is a translocation?