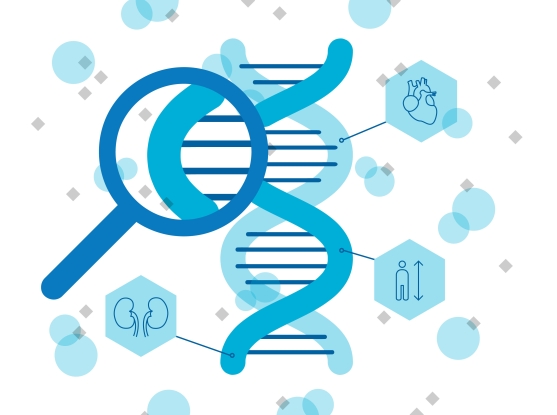 The UK Biobank, a large-scale database of genetic and health information from half a million UK participants, released new data last year — the sequences of the protein-coding part of the genome called the exome. Researchers who analyzed that whole-exome sequencing data from roughly 200,000 participants have now identified several new rare gene variants that greatly increase the risk of, or even cause a variety of cardiometabolic diseases.

In a study published in Nature Genetics, researchers at the Broad Institute of MIT and Harvard, Geisinger MyCode Study, the Regeneron Genetics Center, and other institutions studied the contribution of rare genetic variants to 83 different cardiometabolic diseases and traits, including heart failure, diabetes, kidney disease, and high cholesterol levels. The team found 57 significant associations between these variants and traits — some previously known and some newly discovered. They also showed that 1 to 2.4 percent of the participants carry genetic variants linked to certain cardiometabolic diseases.

The scientists say the findings demonstrate the power of large-scale exome-wide sequencing and could help other research aimed at finding new treatments and screening methods for patients with these diseases.

“What was fascinating to me was that we were able to pick up signals for these common and rare diseases in 200,000 people that are a cross section of the population,” said Patrick Ellinor, co-senior author of the study, director of the Cardiovascular Disease Initiative and the Precision Cardiology Laboratory at the Broad Institute, director of the Demoulas Center for Cardiac Arrhythmias at Massachusetts General Hospital, and a professor at Harvard Medical School.

Over the last decade, genome-wide association studies (GWAS) have identified a large number of genetic regions associated with diseases, but often focused on common genetic variants with small effects on disease risk. Rather than analyzing the entire genome, the team focused on the protein-coding regions of the genome and in particular, rare genetic variants that disable a gene, also called “loss of function” (LOF) variants. By homing in on these LOF variants, the researchers were able to identify genes with a large or even causative role in diseases, which could help scientists better understand the biological mechanisms underlying these diseases.

For example, the team found that rare variants of the gene GIGYF1, which is one of many other genes previously linked to type 2 diabetes, are responsible for a major increase in risk for type 2 diabetes.

The team also assessed and clarified the risk associated with Mendelian genes known to cause disease. For example, they found striking increases in the risk of high blood cholesterol and chronic kidney disease associated with variants in the LDLR gene and the PKD1 gene, respectively. With such a large dataset to analyze, the team was also able to evaluate how frequently certain rare variants for cardiometabolic diseases were found in the participants. They discovered that between 1 and 2.4 percent of individuals were carriers of potentially disease-causing variants for cardiomyopathy, arrhythmia, hypercholesterolemia and diabetes. The scientists believe that this finding can offer insights into the frequencies of pathogenic variants within the general population.

To replicate their findings in a population outside of the UK, the Broad team worked with collaborators with the Geisinger health system and the Regeneron Genetics Center to analyze data from nearly 175,000 participants living in the United States. They found strong replication for many of the genetic associations, indicating that the findings were not specific to the UK Biobank data.

“Our findings may help both geneticists and clinicians better understand the relative risk conferred by disease-causing variants,” said Sean Jurgens, co-first author and visiting scholar with the Cardiovascular Disease Initiative at Broad. “Our findings may also inspire future studies aimed at genetic screening of these cardiometabolic diseases.”