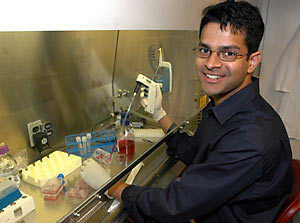 Vamsi Mootha, M.D., an associate member of the Broad Institute of MIT and Harvard, received a MacArthur fellowship for advancing the understanding of disease and basic biology through genomics, proteomics and computation.

The MacArthur Fellowship is a "no strings attached" award in support of people, not projects. Each fellowship comes with a stipend of $500,000 to the recipient, paid out in equal quarterly installments over five years.

This year there are 23 people, across all fields of endeavor (including composer, writers, artists, scientists).

Currently, Mootha is finishing a postdoctoral fellowship at the Broad and an instructorship in medicine at Brigham and Women's Hospital.

"This is a wonderful recognition of an extraordinary individual," said Eric Lander, founding director of Broad. "Vamsi has creatively applied his diverse backgrounds in medicine, cell biology and computational science to key challenges in the study of human disease. The award is richly deserved."

A leader in using computational methods to address biological questions, Mootha has led several studies at the Broad into the inner workings of mitochondria — tiny structures within a cell that take in oxygen and pump out energy.

Earlier this year, Mootha and colleagues identified three proteins that form a regulatory circuit in controlling the amount of mitochondria. The circuit represents a promising drug target for type 2 diabetes. In principle, a drug that acts on the proteins to boost the energy-producing machinery in muscle may ameliorate the disease, he said.

Work previously published by Mootha and colleagues at the Broad showed that genes responsible for the primary function of mitochondria turn up less frequently in the muscles of diabetics and those at risk for diabetes.

"It's an unbelievable feeling. I've always admired previous recipients of the award, but never imagined that I'd be an awardee myself," said Mootha. "It's nice being honored for the work I so enjoy doing."