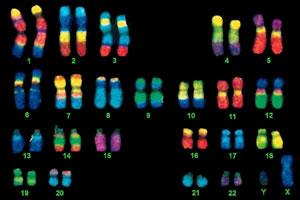 This chromosome "painting" depicts the landscape of a normal cell's genome. The chromosomes have been false colored to indicate deletions, duplications, and translocations. Cancer cells acquire many, many more of these genetic alterations, some of which may drive cancer development.
Image courtesy of Steven M. Carr, © 2008, after original by Genetix, with permission

The genome of a cancer cell makes for a bizarre landscape. Compared to the genome of a normal human cell, the cancer genome is distorted - sometimes sections are missing, repeated, or scrambled. Parts of chromosomes may be rearranged so that pieces from one chromosome become attached to another. Some of these mutations are most likely causing, or driving, cancer and could inform drug treatment options for patients. But other mutations are simply along for the ride and have little relevance to cancer's progression or treatment.

To determine which mutations may underlie cancer, researchers want to discern what alterations repeatedly crop up in tumors from different patients. Most likely, these prevalent mutations are not due to random chance: they are the result of cancer cells selecting for mutations that give them the power to grow unchecked and invade surrounding tissue.

To find these alterations, researchers led by Matthew Meyerson, a professor of pathology at the Dana-Farber Cancer Institute and senior associate member at the Broad Institute, amassed data from over 3000 cancer specimens representing more than 26 cancer types. With this much data in hand, researchers from the Broad Institute and the Dana Farber Cancer Institute began to pick out patterns of alterations. So much raw information makes it impractical to see these patterns emerge with the naked eye, so the researchers designed computer algorithms to make important mutations stand out. Their results appear in the February 18 issue of Nature.

"The two main advantages of using a large dataset are, first, that it enables us to study general patterns of mutation and find some surprising ones that seem to be true across many different tissue types," said Rameen Beroukhim, an associate researcher for the Broad's Cancer Program and a first author on the paper. "And the second thing is that a really large dataset allows us to ask, what are the genes that are being targeted?"

This means that oncogenes like MYC, ERBB2, NKX2-1, EGFR, and KRAS are not restricted to one type of cancer.

"It turns out that if you look very systematically at events, there are some that are recurrent across cancer types," said Craig Mermel, a graduate research assistant at the Broad Institute and co-author. "There's only a small fraction of genes that are truly restricted to one tumor type. At a high level view, cancer shares this core machinery. All cancers need some alterations and tend to use the same genes to get there."

Beroukhim described their approach as turning the classic model for categorizing cancer on its side.  Classically, cancers have been divided by their tissue of origin, and researchers have looked for oncogenes within these tumor types.  However, it may be biologically more meaningful to divide up cancers by the oncogenes that drive them.  The group led by Dr. Meyerson found that multiple tissue types will fall within each of these categories.

However, detecting alterations that power cancer is not as simple as determining the most common alterations. Copy number alterations - duplications and deletions of regions of the genome - are not evenly distributed across the cancer genome. For instance, the researchers found that regions that are less gene-dense are more prone to alterations. These mutations are tolerated - because there are fewer genes in the area, it's less likely that something important has been disrupted - but are not driving cancer. If these sorts of biases in the data go undetected, they can obscure meaningful patterns and important clues about what mutations are enabling cancer.

"That's the one thing in smaller datasets that you would never know," said Mermel. "You would see these alterations that occur at a very high frequency and those are obvious, but some of them are artifacts that may not be relevant to tumorigenesis."

Using a larger dataset helps bring these subtle but important biases in the data to light. The more the researchers understand about the standard patterns of genome alterations, the better equipped they are to pick out events that are shaping cancer.

"It's an iterative approach," said Mermel. "The dataset allows you to investigate things that may or may not be true about the assumptions that go into your analysis." The assumption that mutation events are equally likely to occur anywhere in the genome turned out to be incorrect. This gave Mermel and Beroukhim the ability to adjust and improve their view of the data.

The researchers focused in on one family of genes that came up frequently in the data and appeared to be essential to the cancers in which it was found. Known as the BCL2 family, many of these genes promote or inhibit cell death, a safety mechanism that cancer must override in order to take hold. Two of the BCL2 family members that halt cell death are in regions of the genome that are frequently amplified - or repeated multiple times - across cancers.

"Copy number events affecting these pathways occurred in over half of all cancers," said Beroukhim. "It's clearly a widespread phenomenon." The BCL2 family is already linked to cancer and is the target of some cancer drugs, but the new study raises recognition of the prevalence and potential importance of mutations affecting this family.

In addition to well-known oncogenes and tumor suppressor genes, the researchers detected new regions that may hold undiscovered cancer-causing mutations. To make these data accessible to colleagues in the cancer research community, the researchers built an online tool, the Tumorscape portal, which allows others to search the data for genes or cancers of interest. "We put a lot of time into developing a resource that would allow other people to take advantage of the data," said Mermel. "We really wanted non-computational people to be able to explore it."