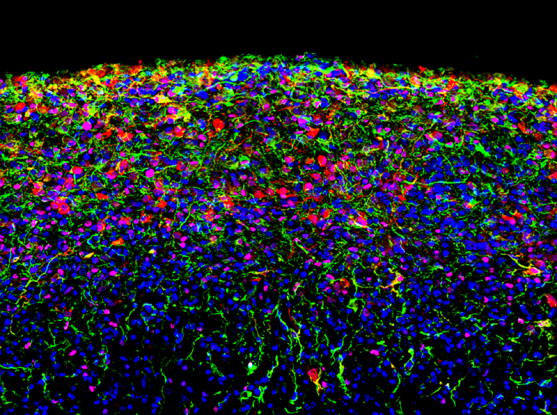 Measuring just a few millimeters across, clusters of cultured cells that self-assemble into three-dimensional structures may look like just tiny blobs. But these tissues, called organoids, are enabling scientists to study biological processes in health and disease — and find potential new treatment strategies — in ways they couldn’t before.

That’s because organoids can mimic many of the anatomical and functional features of a wide variety of human tissues, and, for some tissue types, can be created more efficiently than other models such as cell lines or animal models. Their three-dimensional organization can capture much of the complexity of organ structures and cellular relationships, which may be more relevant to real patient tissues. And organoids derived from patients may provide individualized models of disease that are a step closer to precision medicine.

Researchers at the Broad Institute of MIT and Harvard and beyond have spent years developing and refining methods for growing organoids of various kinds. In the last few years, those methods have advanced enough to allow researchers to derive organoids in a reliable, reproducible manner, making them a viable research tool that offers many advantages.

Organoids are far more accessible for laboratory tests than whole organs or lab animals. They can be genetically engineered or treated with chemicals to explore the workings of specific genes, proteins or pathways. They also lend themselves well to high-resolution imaging and single-cell genomics or transcriptomics, revealing a wide variety of scientific insights.

Here are snapshots of three research groups at the Broad deriving and using different types of organoids to look for new drug targets and find mechanisms of disease.

As a developmental neurobiologist, institute member Paola Arlotta wants to understand the development and function of the human brain, especially the cerebral cortex, which controls our most complex — and arguably our most human — behaviors. But studying rodents and neuronal cell lines will only get her so far.

“The human brain has changed through evolution compared to even our closest relatives,” said Arlotta, who is also chair of Harvard University’s Department of Stem Cell and Regenerative Biology and an associate member of the Stanley Center for Psychiatric Research at Broad. “Therefore, there is only so much that we can learn about how our own brain is made by studying the brains of other species.”

Human brain organoids can fill some of that gap. These raisin-sized organoids lack blood vessels and recognizable brain structures or layers, but at an ultrastructural level, the tissue looks nearly indistinguishable from that of a real brain, with most key cell types, connections between neurons, and even active circuitry. 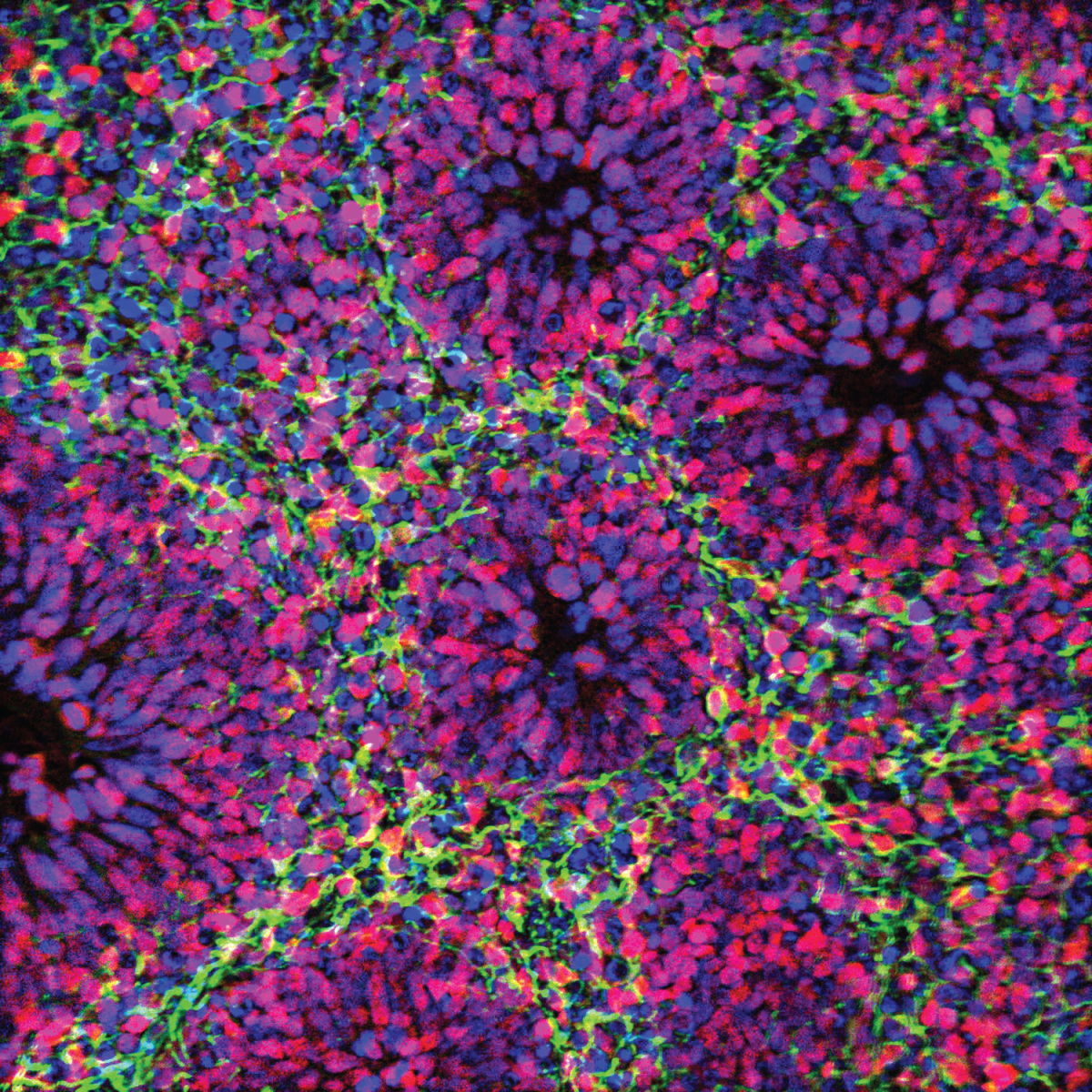 High-magnification view of a brain organoid after 30 days in culture. Neural progenitors (red) are organized into rosette-like structures where they give rise to neurons (green) that accumulate at the periphery of these structures. Cell nuclei are labelled in blue. Credit: Silvia Velasco, Paola Arlotta laboratory, Harvard University, Broad Institute 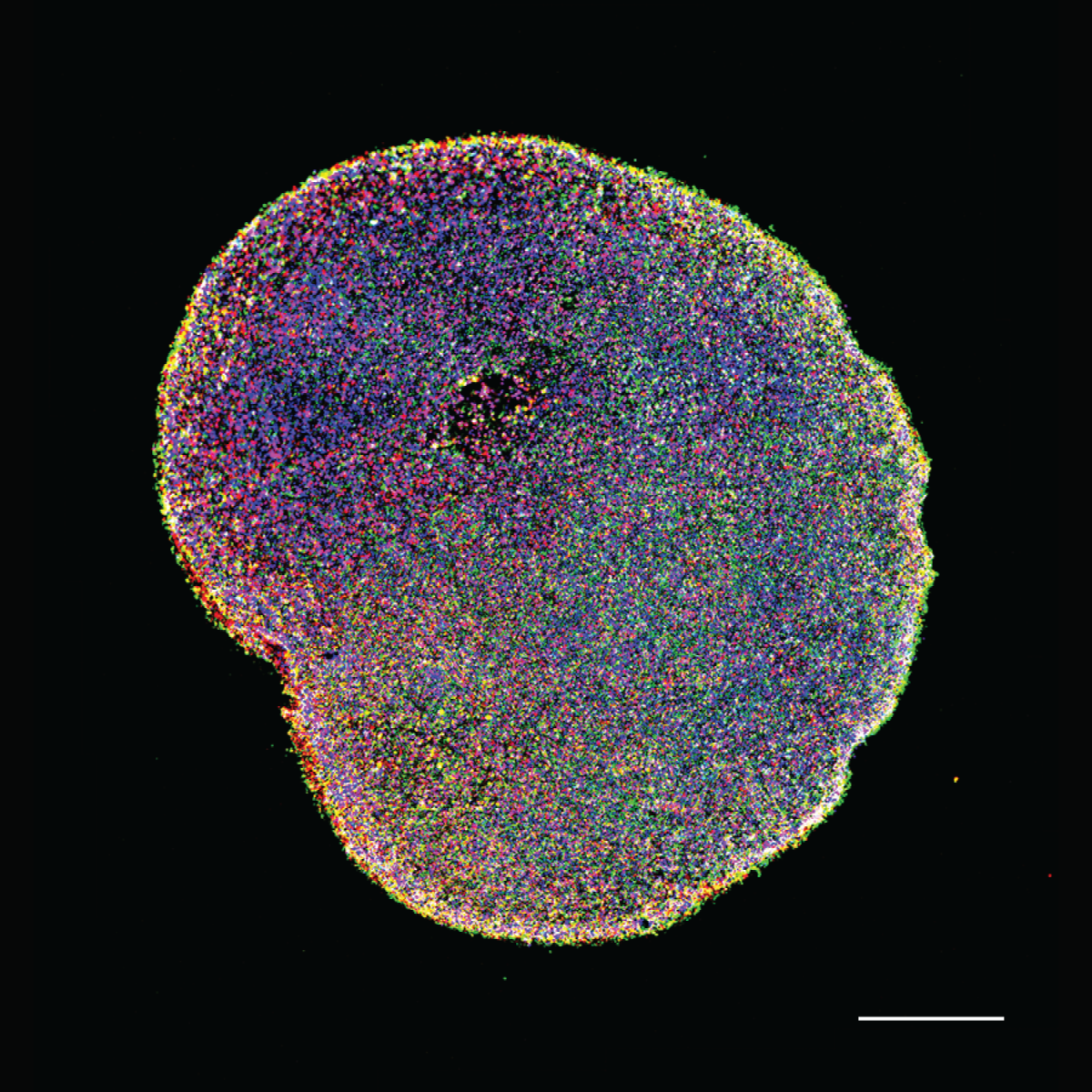 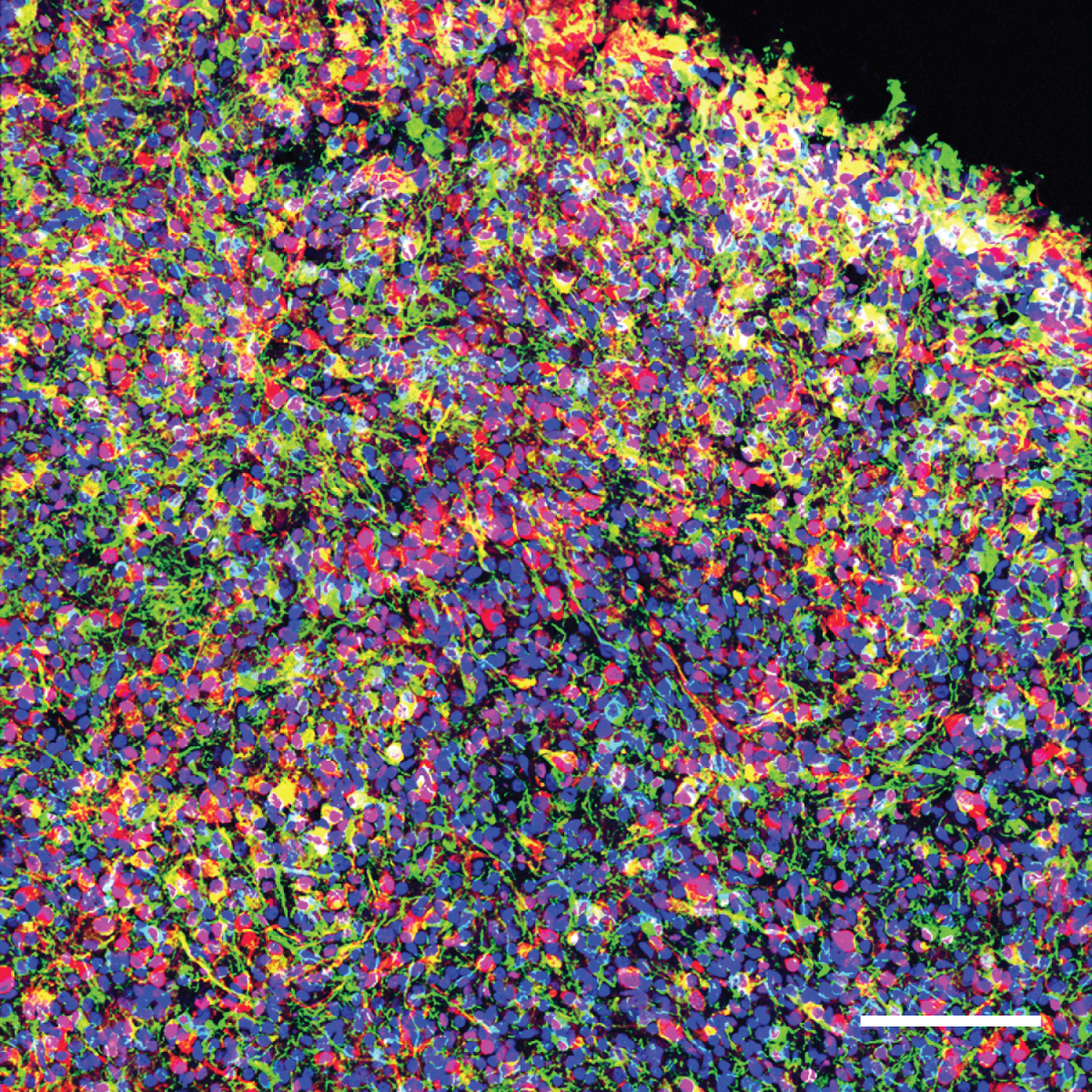 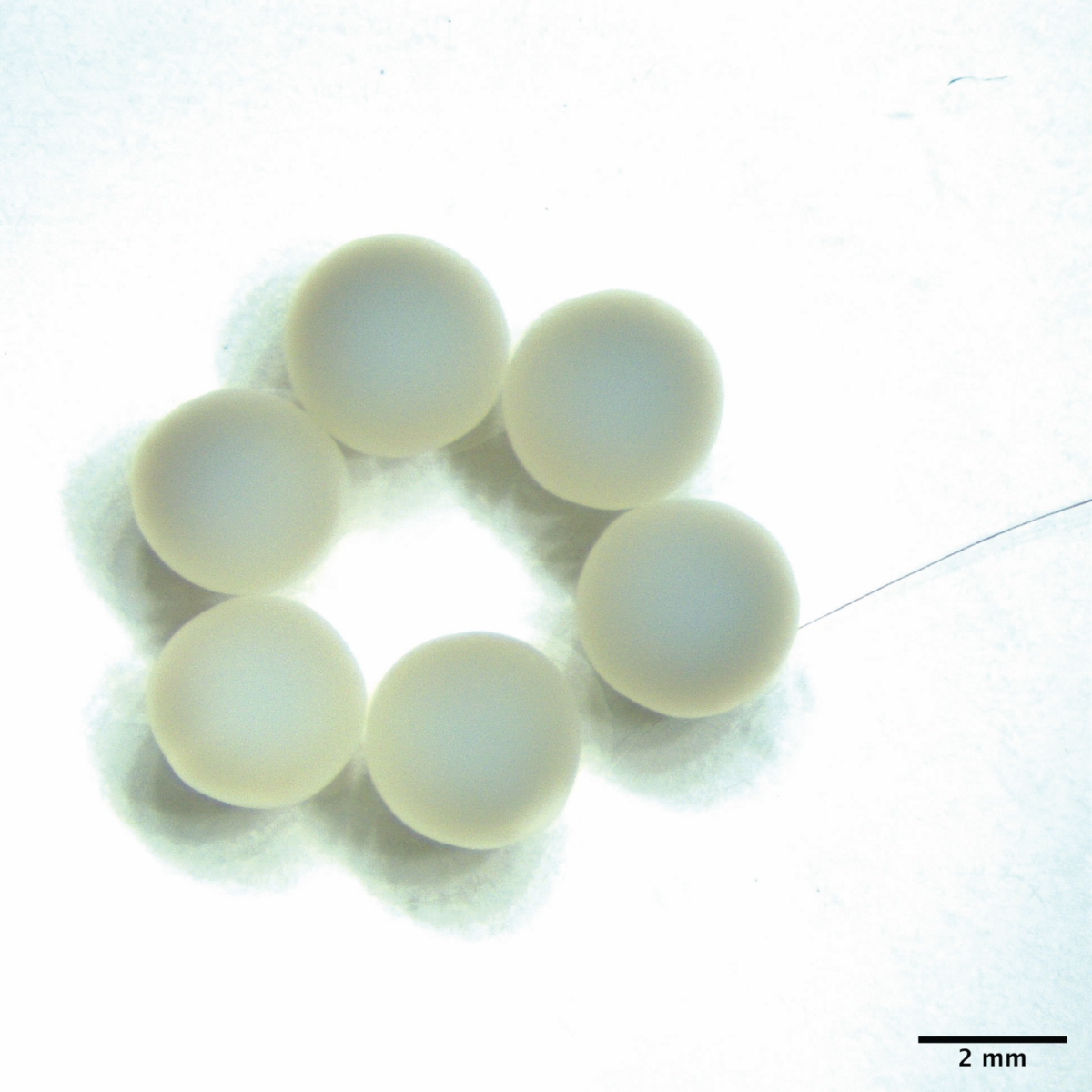 What’s more, if brain organoids are grown from cells with gene variants that have been linked to complex psychiatric or neurodevelopmental disorders such as schizophrenia and autism, they may recapitulate the effects of these genetic changes in a more informative way than nonhuman models. “We never had the right experimental system to ask what mutations in disease risk genes do in the human brain, and that's what the organoids really gave us,” said Arlotta.

She and her lab have devoted several years to improving organoid protocols and developing methods to grow the tissues for longer periods — months to years — to better represent later stages of brain maturity. In a 2019 Nature paper, Arlotta and her colleagues showed that they could generate long-growing organoids that make the full gamut of cortical cell types, even when produced from different stem cells and under different growth conditions.

“Most importantly, the organoids could make cortical cells reproducibly, making the same set of cells in each organoid every time,” she said.

Reliable methods of generating brain organoids have allowed Arlotta’s group to now use them to unpack the biological complexity of neurodevelopmental disorders, including autism. Autism is most often associated with a complex genetic background in which many different gene variants likely contribute to the disorder. But in rare cases, the development of features linked to autism may be strongly associated with one or a few specific mutations. Arlotta’s group is generating organoids that carry such autism-associated mutations, and then comparing them with those grown from the same cell lines but without the mutations.

“This type of work is foundational” to understanding how genetic changes affect the function of brain circuits over time, Arlotta noted. Researchers can also compare brain organoids containing the same mutation in different genetic backgrounds, which Arlotta believes will have strong influences on the manifestation of the disorder. Someday, perhaps, brain organoids generated from cells from individuals with autism could yield further clarity about the breadth and diversity of the underlying genetics.

Organoids are not meant to replace mice and other model systems, she said. But for some questions, they offer a way forward that wasn’t previously possible: an opportunity to study disease in human tissue. “As primitive as these organoids may still be, they open a door that was never opened before,” Arlotta said. “And I believe we have a responsibility to take the opportunity to study the genetics of these diseases in this new and promising way.”

“The kidney is second in complexity only to the human brain,” said institute member Anna Greka, a cell biologist and a physician at Brigham and Women’s Hospital and Harvard Medical School. Organoids can capture more of the 3D structure of such an intricately layered organ.

Greka’s group has demonstrated that kidney organoids can serve as highly reproducible, high-quality representations of the human kidney. In a paper published last year in Nature Communications, they analyzed more than 450,000 individual cells from 49 organoids derived via widely used methods from four people of different sexes and ages. The team showed that the organoids were highly comparable both to each other and to the kidney. 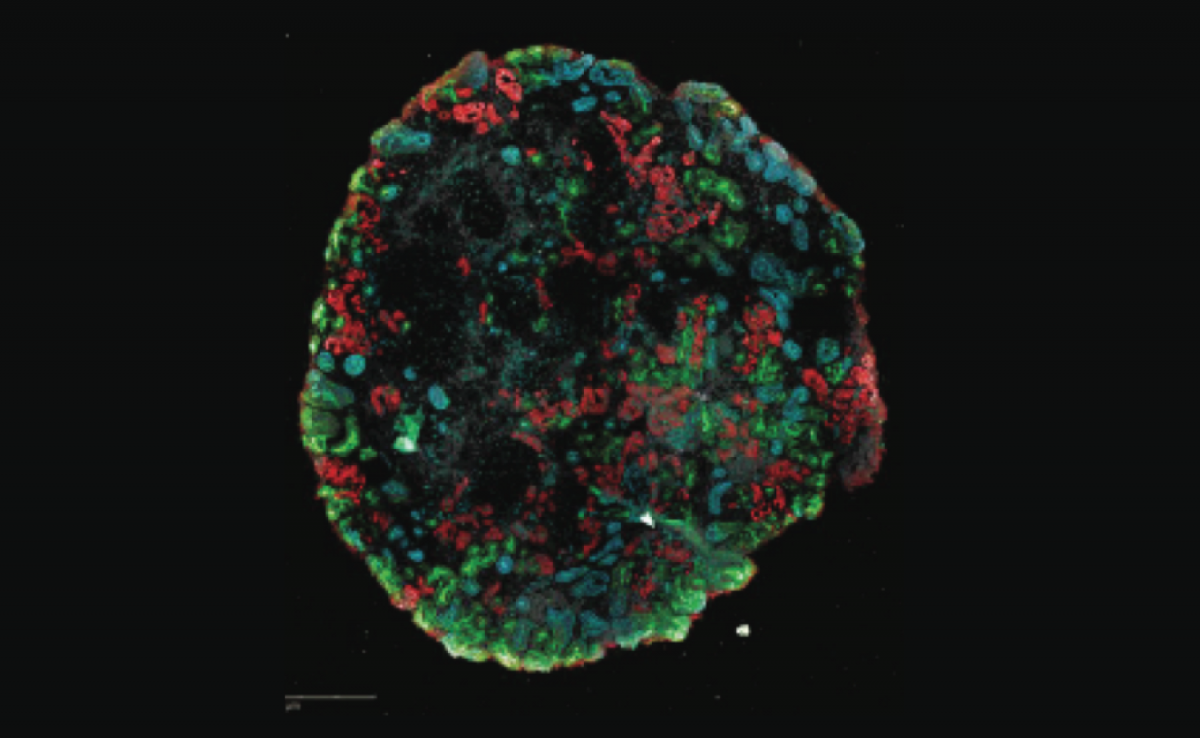 At the same time, Greka’s lab is showing organoids’ potential as disease models for drug discovery. In what she describes as a “mini efficacy trial in a dish,” her team derived organoids from cells donated by three patients with a genetic disorder called mucin 1 kidney disease and compared them with others derived from the patients’ unaffected siblings. As described in a 2019 Cell paper, the researchers identified misfolded mutant mucin 1 protein trapped in the tubules of the patients’ organoids, much like in their organs.

With that knowledge, the team tested potential drug compounds and found one that eliminated the mutant protein in the organoids, as well as from the kidneys of mice engineered to have the same misfolded protein. They identified the target of the drug as a molecule called TMED9 and showed that it was upregulated wherever the mutant protein accumulated in the patient organoids. “We were able to utilize the organoids as a system in which to gain insight into possible mechanisms and even a therapy for this disease,” Greka said.

She hopes to build on this work to explore the role of a patient’s genetic context. “Not all of us come down in the same way with a disease. Our genetic backgrounds and susceptibilities probably have something to do with that,” Greka said. Organoids “can bring the genetic background of individual patients to bear in our studies, and show us how that affects the variability that we see in the ways human diseases manifest. This is a promising path to much-needed precision therapies for thousands of currently incurable diseases.”

The TMED9 study showed the power of organoids for exploring mechanisms and clinically relevant questions, but the real proof will be when the first organoid-developed therapeutic receives approval, Greka said. Several biotechnology companies, including Goldfinch Bio, a Boston-based biotech company for which Greka serves as an adviser, have developed kidney organoid platforms to move candidate molecules toward the clinic.

Cancer cell lines have been the workhorse of cancer research for decades, but tumor organoids, which are grown from tumor cells from patients, are easier and faster to make, said institute scientist Jesse Boehm. His team, the Broad Cancer Cell Line Factory (CCLF), is part of an international consortium led by the National Cancer Institute (NCI), called the Human Cancer Models Initiative, whose goal is to make 1,000 patient-derived tumor organoid cultures and add them to the NCI’s library of tumor models.

So far, the CCLF team has created hundreds of tumor organoids, many from rare cancers. Each organoid model is annotated with its key molecular features including germline and primary tumor DNA sequences and, importantly, the patient’s clinical data, such as demographics, disease stage, drug resistance, responses to prior treatments, and more. The Broad is unique among the consortium partners in that it is also developing and sharing organoid-growing protocols.

These tumor organoids were derived from a brain biopsy of a metastatic breast cancer patient. Credit: Rebecca Deasy and Moony Tseng

With a greater number and breadth of cancer models to analyze, the CCLF team is now using organoids to expand their search for genetic vulnerabilities in a larger number of cancers. The ultimate goal is to find precision treatments that target these vulnerabilities in more patients; only about 25 percent of patients with cancer today receive treatments selected to match the genetic makeup of their tumors, Boehm said.

“You can make organoids that represent the full scope of patient diversity,” Boehm said. That’s critical for complex diseases like cancer where a patient’s genetic background may have a strong influence on the course of disease or the best treatment.

Boehm is the scientific director of the Cancer Dependency Map (DepMap) Initiative, which is systematically identifying genetic mutations that are essential for tumor growth. Because tumor cells depend heavily on these mutations for survival, the mutations are also vulnerabilities that cancer drugs can take advantage of to kill the cells. “Our goal is to be able to take a patient tumor, molecularly analyze it, and predict its vulnerabilities,” Boehm said. “Then we can exploit those genetics by targeting them with drugs.”

Tumor organoids will expand the power of the DepMap by offering models for a wider range of tumors, Boehm said. For example, the relative ease of production means that researchers can make organoids from the same patient at multiple time points or stages of tumor development. This will allow scientists to learn more about how tumors change over time, such as the development of drug resistance.

To integrate tumor organoids into the DepMap, Boehm and several collaborators at Broad, including DepMap associate director Francisca Vasquez, David Root, senior director of the Broad’s Genetic Perturbation Platform, institute member William Hahn, and others, are developing high-throughput approaches to screen tumor organoids for genetic vulnerabilities. They are using CRISPR technology to systematically knock out each gene in an organoid, then screen the organoid for potential drug targets. They have been able to optimize about a dozen screens so far and are tackling the challenge of scaling up the process.

Boehm predicts that tumor organoids will outpace cancer cell lines for basic cancer studies within a few years. “I think organoids are the future of cancer research,” he said. “Not because they’re necessarily better, but because they’re easier to derive.”

He adds that tumor organoids will have a key role to play in cancer precision medicine, where a cancer patient can have their tumor genome sequenced and, based on that molecular profile, be given treatments most likely to be effective. “I see organoid research as part of the next step of how we study and treat cancers,” Boehm said.