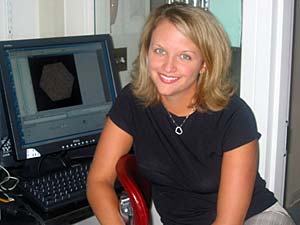 The National Center for Research Resources (NCRR), a component of the National Institutes of Health (NIH), announced today it will fund the first national center for high-throughput genotyping dedicated solely to large-scale SNP (single nucleotide polymorphism) analysis at the Eli and Edythe L. Broad Institute of MIT and Harvard University in Cambridge, Mass. A five-year cooperative agreement will provide more than $14 million to create a high-capacity resource so that U.S. researchers can quickly and cost-effectively carry out large-scale studies of genetic variation in humans and animals to advance disease gene identification.

Research on genetic variation is aimed at improving the diagnosis and treatment of numerous diseases of humans that may have significant genetic components — such as type 1 diabetes, schizophrenia, and some types of cancer — by identifying specific genetic markers, or genotypes that are associated with particular diseases or responses to drug therapies. Studies examining genetic variation in animals such as mice and rats, can identify genetic regions that in humans may contribute to complex diseases such as diabetes and hypertension.

"The tremendous potential of genetic research makes it critical that we develop this central resource so investigators around the country can access high-capacity genotyping with the additional benefits of economies of scale, quality assurance and data sharing," said NCRR Division for Clinical Research Resources Director Anthony Hayward, M.D., Ph.D. "The demand for genotyping will grow exponentially as investigators prioritize potential targets for treatment and as members of afflicted families try to better estimate their risk for a particular condition."

Many diseases can be traced to inherited differences in each individual's genes. The most common type of variation in the human genome is the single nucleotide polymorphism, or SNP (pronounced "snip"). A SNP is a single DNA base pair, or unit of DNA, the sequence of which can vary from individual to individual. It is estimated that there are at least 10 million SNPs in the human population, although no two individuals will vary at every such position. Scientists have found that certain SNP combinations are associated with predisposition to particular diseases or adverse drug reactions.

An integrated SNP selection tool will be provided to automate queries and create SNP panels. A secure, web-based environment will provide access to a database linked to an in-house DNA repository and all samples will be coded to assure subject confidentiality. Results will be accessible to the investigators through a secure database integrated with a suite of data management and analytic tools for analysis of correlations among variants and with disease phenotypes.

Because investigators use different technologies based on the scales and configurations needed, a menu of services will be offered using three different technology platforms. When fully operational, the center will be able to process from 200 million to as many as billions of genotypes per year, depending on the technology platform used and the needs of outside users. The cost for genotyping will be on the order of pennies per genotype, varying according to the technology platform used. Two decades ago, the cost was $10 per genotype, and prices are expected to drop further as technology improves. A portion of the center's annual budget will be used to partially support compelling genotyping research projects, to be selected by a steering committee.

Stacey Gabriel, Ph.D., the new center's principal investigator and director, currently oversees the Broad's Genetic Analysis Platform, where she manages all of the genotyping, SNP discovery, and production activities related to human genetics. She also serves as scientific director of Broad Institute's portion of the International HapMap Project, a collaborative public project designed to advance genetic research and its application to disease gene discovery by determining patterns of genetic variation throughout the human genome (www.hapmap.org).

"We are thrilled that the NCRR has selected the Broad Institute for this important responsibility. Human genetics is undergoing an extraordinary transformation, which is leading to the ability to take a comprehensive view of all human genetic variation and its association with disease. The National Genotyping Center at the Broad will make this capability accessible to many biomedical researchers and thereby have a direct impact on the understanding of disease," said Eric Lander, Ph.D., founding director of the Broad Institute.

NCRR is part of the National Institutes of Health, an agency of the Department of Health and Human Services. NCRR is the nation's leading federal sponsor of resources that enable advances in many areas of biomedical research. NCRR support provides the scientific research community with access to a diverse array of biomedical research technologies, instrumentation, specialized basic and clinical research facilities, animal models, genetic stocks, and such biomaterials as cell lines, tissues, and organs.

The Broad Institute (rhymes with "code") is known officially as The Eli and Edythe L. Broad Institute. It is a research collaboration of the Massachusetts Institute of Technology, Harvard University and its hospitals and the Whitehead Institute for Biomedical Research. The Broad mission is to create comprehensive tools for genomic medicine, make them freely available to scientists worldwide and pioneer their application to understand and treat disease.

Center for Genotyping and Analysis