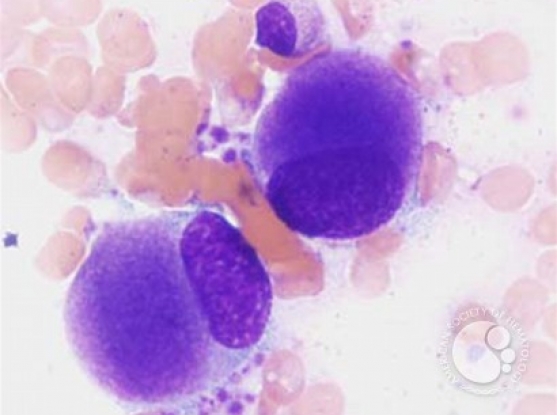 A decade ago, patients with one of the myelodysplastic syndromes (MDS) faced an uncertain future. A blood disorder that frequently progresses to acute leukemia, MDS affect more than 20,000 individuals in the United States each year, though little is known about their molecular origins. MDS can be difficult to diagnose and can be even harder to predict how severely it might impact an individual patient. Therapeutic options remain limited and often benefit only a fraction of patients who receive treatment.

Azacitidine became the first drug available for MDS in 2004. Since then, other MDS drugs have joined the fight and more has been learned about the genetic basis of these disorders. Progress has now been made to understand the impact of genes mutated in MDS. In a paper published in this week's New England Journal of Medicine, researchers associated with the Brigham and Women’s Hospital and the Broad Institute of MIT and Harvard report on finding mutations in 18 genes linked with MDS. Mutations in five of those 18 predict poorer overall survival than expected.

“We found that patients who had a mutation in any one of those five genes did not live as long as we would have predicted based on clinical features we know to be prognostic in MDS,” explains paper first author Rafael Bejar, MD, PhD, a research fellow at Brigham and Women’s Hospital. “These are patients that will not do as well as we thought, and we might offer them more aggressive therapy or look for other ways to treat them.”

MDS remain a challenging disease to diagnose. Diagnosis and treatment are made based on an analysis of a bone marrow biopsy. Pathologists look for a variety of microscopic and clinical features including the presence of abnormal cells in the bone marrow, and visible chromosomal abnormalities.

“For a few years, we have known that several genes are mutated in MDS but we did not know what their effects are in terms of their clinical impact,” says co-author Benjamin Ebert, MD, PhD, associate physician in medicine at the Brigham & Woman’s Hospital and an associate researcher at the Broad Institute. “This investigation is the result of looking at those mutations in many different patient samples to link the presence of gene mutations with disease outcome.”

Ebert has been studying MDS since his postdoctoral studies beginning in 2003 in the laboratory of Todd Golub, core member and director of the Cancer Program at the Broad Institute.

Instead of sequencing the whole genomes of patients with MDS, Ebert’s team chose to focus on identifying mutations in known cancer genes across large numbers of samples. Previous studies involved either a small number of samples, or analyzed a small number of genes, or both. Until this study, no one had looked at this many MDS genes simultaneously and in such a large sample size.

From 439 bone marrow samples, Ebert’s team identified mutations in 18 genes, including two that were not previously known to be associated with MDS. They then correlated the mutation status with various clinical parameters, most importantly survival.

“Mutation analysis is currently used clinically for some cancers but not for MDS,” Ebert explains. “In this paper we are suggesting that it should be part of medical practice.” MDS patients are typically scored using the International Prognostic Scoring System (IPSS) that helps determine what treatment patients get. The IPSS score incorporates chromosomal abnormalities but does not include the mutation status of any genes. “This work indicates that mutation status is important clinically and in particular, that mutations in five genes — TP53, EZH2, ETV6, RUNX1, and ASXL1 — predict survival independent of other variables currently used in practice,” he adds. “That could potentially change which therapy would be offered to a significant portion of MDS patients.”

Going forward, Ebert and his colleagues intend to focus on linking MDS genetic analysis with specific treatment outcomes. “The next step is to look at patients where we know exactly how they were treated, look for these same mutations, and see if any of these mutations predicted how they respond to therapy. Does mutation A mean you won’t benefit from therapy? Does mutation B mean you’re going to be a really high responder?” Bejar says. In this way, they hope to offer clinicians and patients real-time, practical guidance about what treatment is most likely to benefit a particular patient with a known genetic mutation. The number of treatment options for MDS has grown, including three FDA-approved MDS drugs in addition to bone marrow transplantation, which can be curative. “This is why we are so motivated to peg mutations to treatments to outcomes,” he adds.

Knowing these mutations should also help diagnose MDS. “Figuring out who has MDS can be complicated because you have to rely on the cells looking a little bit abnormal and that can vary from pathologist to pathologist,” says Ebert. He adds that knowing these mutations should help lend some diagnostic specificity, conceivably using just a simple blood test that could decrease the need for a bone marrow biopsy.

Bejar cites a parallel with acute myeloid leukemia, another blood malignancy. “AML is about five to sevenyears ahead of where we are in MDS now,” he explains. Researchers have identified many AML mutations that affect outcome and several are now part of routine clinical testing. There are certain genes that help stratify them into different risk groups that affect treatment options. Ebert’s team hopes to advance MDS to that stage.

“Whether I’m at the hospital or at medical meetings, clinicians ask me how best to sort through multiple therapeutic options for their MDS patients,” Ebert adds. “Being able to identify which of these gene mutations predict response to a particular therapy is not just of intellectual interest but a practical priority to a lot of people.” It is thought that MDS is an underdiagnosed disease, particularly in the elderly, in part because of the need to do a bone marrow biopsy. “If there was an easier way to diagnose it and specific treatments for particular mutations, then we would have a greater incentive to diagnose it,” he adds.

This study was funded by the National Institutes of Health and the Starr Cancer Consortium with the goal of understanding the genetics of MDS as well as a sibling disorder called myeloproliferative disorder.