A new understanding of the evolutionary path of modern humans 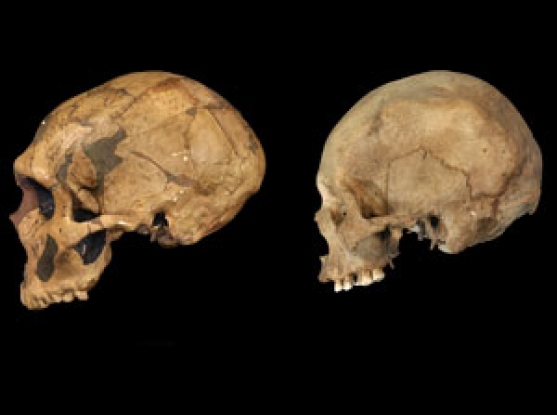 Ancient history is getting a rewrite. Researchers have learned new information about the genetic relationship between modern humans and Neandertals, the closest relatives to living humans who became extinct approximately 30,000 years ago. Using the newly available Neandertal genome, produced by scientists at the Max-Planck Institute together with colleagues at the Broad Institute and elsewhere, researchers have uncovered striking evidence that Neandertals and modern humans shared more than geography—it seems they also interbred.

Perhaps the most striking finding is that the Neandertal genome is more similar to present-day humans in Eurasia (Europe and Asia) than to present-day humans in sub-Saharan Africa. This is the first observation that genetic overlap occurred between Neandertals and modern humans. This overlap appears to have been limited to non-Africans. The new work, led by researchers at the Max Planck Institute in Leipzig, Germany appears in the May 7 issue of Science.

Fossil records suggest that modern humans were confined to the Africa/Middle East range until about 50,000 years ago when there was a mass out-of-Africa migration. This migration would have brought modern humans together with Neandertals in Eurasia. Because of this geographic co-mingling researchers have long wondered if the two populations mixed genetically but lacked conclusive proof. “Neandertals were the most advanced non-modern human fossils and there was controversy regarding the extent of their mixing with modern humans,” explained David Reich, associate professor of genetics at Harvard Medical School and an associate member of the Broad Institute, who played a leading role in analyzing the Neandertal genome and comparing it to modern humans.

The DNA sequencing and analysis effort was a technological tour de force. It speaks of the ability to sequence a genome out of a 40,000 year-old specimen despite a range of technical challenges, including contamination with other sources of genetic material and the difficulty of extracting and analyzing ancient DNA.

The effort was led by Svante Pääbo and his colleagues at the Department of Evolutionary Genetics, Max-Planck Institute for Evolutionary Biology in Leipzig, Germany, who purified the Neandertal genome from three bone fragments discovered in Croatia. Earlier, the Leipzig team sequenced and analyzed multiple mitochondrial DNA sequences from these bones, which is found in much higher concentrations than nuclear DNA. However, the work did not provide any evidence of gene overlap with modern humans.

Removal of present-day human contaminants posed a special challenge for this analysis because humans are so genetically similar to Neandertals. And, the available samples of ancient DNA yielded only short pieces of sequenced bases, which averaged less than 40 bases long. However, the modern day human genome differs from Neandertals one in every 700 bases so almost every Neandertal sequence read will be identical to human. For this reason, it was essential to remove any contamination so as not to confuse the sequence findings.

After drilling the bone and performing extensive purification of the samples in a clean room environment, the Leipzig group further reduced contamination by developing a system of marking each DNA fragment derived from the Neandertal sample with a unique identifying bar code. This allowed them to filter out nonbarcoded data from modern human sequences that might have contaminated the sample in later steps. This was a significant challenge in earlier work.

With contributions from Broad researchers, including Chad Nusbaum’s group in the Broad’s Genome Sequencing and Analysis Program, over 3 billion purified Neandertal nucleotides were sequenced providing results for approximately two-thirds of the complete Neandertal genome.

“Because of the bar coding and degraded DNA samples, we had to find new strategies for applying our sequencing technology to maintain our efficiency and accuracy standards,” said Nusbaum. This resulted in higher concentrations of purified Neandertal DNA that could be efficiently sequenced with the result that about two-thirds of the bases in the genome are available for research. “Only three years ago, all one could do was to analyze mitochondrial DNA because it is found in high quantities in cells,” explains Reich.

With the Neandertal genome sequence in hand, Reich and fellow Broad researcher Nick Patterson played a leading role in analyzing the relationship between Neandertals and modern humans. Neandertal and modern humans overlapped geographically in modern Europe and western Asia between 80,000-30,000 years ago after which Neandertals became extinct. “But there was always a question if these two groups overlapped genetically,” said Patterson. “But no one ever had any clear evidence of it. With the Neandertal genome available now, we had an amazing tool for testing this idea.”

Patterson and Reich did find evidence of gene flow from Neandertals into modern humans. They compared the Neandertal genome with the modern day human and chimpanzee genomes as well as the genomes of five geographically diverse groups: the San from Southern Africa, the Yoruba from Western Africa, individuals from Papua New Guinea, the Han Chinese, and the French in Western Europe.

Specifically, Reich and Patterson found that Europeans, East Asians, and Papua New Guineans are all more closely related to Neandertals than Africans, including South African San Bushmen and West African Yoruba. “This was the first observation we had that there was breeding between Neandertals and modern humans,” said Reich.

Reich and Patterson also looked for sequence differences between subsets of non-African populations in relation to Neandertals. “A lot of people thought that if gene flow occurred it would have been a European-dominated phenomenon but there is no evidence of that. To the limits of our resolution all of the non-Africans from far eastern and southern Asia to far Western Europe look genetically identically related to Neandertal,” said Patterson. “This was a bit of a surprise because much of the range overlap between modern humans and Neandertals was in Europe specifically,” explained Reich. This finding raises another point of interest.

The gene flow between Neandertals and modern humans in this analysis suggested it occurred before the divergence of the non-African modern human group into Europeans, East Asians, and Papuans. According to Reich, “This could potentially be explained by mixing of early modern humans with Neandertals at the gateway of Africa before their large-scale expansion and separation into Eurasia 50,000 years ago.”

Though this analysis concludes that the ancestors of non-African modern humans interbred with Neandertals, the actual amount of gene exchange events may have been very limited. The sequence analyses show that Neandertals contributed only 1 to 4% of the genome of present-day non-Africans.

Other Broad scientists who worked on this project include Heng Li, Eric S. Lander, Carsten Russ, and Nathaniel Novod.