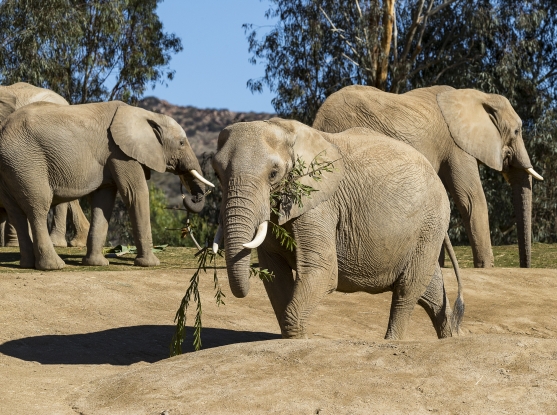 Credit : San Diego Zoo Global
African savanna elephants in San Diego Zoo. In the middle is Swazi, the female elephant from which the reference genome was sequenced
By Namrata Sengupta

Far more evidence of gene flow among elephant species, both extinct and current, than previously thought

Elephants—the largest living terrestrial mammal—began walking the surface of the earth 5 to 10 million years ago in Africa. Today there are fewer than 500,000 elephants alive, making this group of iconic animals a highly protected species—especially in Africa where the perils of ivory-trade continue to threaten them. The shrinking population of elephants makes them an “isolated branch” in evolution, with only three currently recognized species: the Asian elephant, the African savannah elephant, and the African forest elephant.

A consortium of scientists led by researchers at the Broad Institute of MIT and Harvard, Harvard Medical School, Uppsala University, the University of Potsdam, and McMaster University used advanced sequencing technology to recover complete genomes from both living and extinct elephant species. In a paper published in Proceedings of the National Academy of Sciences today, the authors provide a comprehensive genomic portrait of not just the living elephants but also members of extinct mammoths and straight-tusked elephants, as well as the American mastodon, an extinct distant relative of the elephant family. The paper reveals that gene flow between elephant species was a common feature of their history, contrary to previous studies which represented their relationships as simple tree.

“This paper, the product of a grand initiative we started more than a decade ago, is far more than just the formal report of the elephant genome. It will be a reference point for understanding how diverse elephants are related to each other and it will be a model for conducting similar studies in other species groups,” said co-senior author Kerstin Lindblad-Toh, a senior director of vertebrate genomics at the Broad Institute and professor in comparative genomics at Uppsala University in Sweden. Lindblad-Toh was also one of the key organizers of the Elephant Genome Project (EGP) when it began in 2008. The EGP was a part of Broad Institute’s community-driven initiative, representing diverse stakeholders from the elephant genetics and conservation communities.

“There’s been a simmering debate in the conservation communities about whether African savannah and forest elephants are two different species,” said David Reich, another co-senior author at the Broad Institute who is also a professor at the Department of Genetics at Harvard Medical School (HMS) and a Howard Hughes Medical Institute Investigator. “Our data show that these two species have been isolated for long periods of time, making each worthy of independent conservation status.”

The paper confirms that the African savannah and forest elephants are two distinct species, findings that should help to make the case to protect both.

The Broad Institute generated the genomes for all the present-day elephants as well as a high-quality genome from an extinct 120,000-year-old straight-tusked elephant obtained from a sample prepared at the University of Potsdam in Germany. “This is one of the oldest high-quality genomes that currently exists for any species,” said Michael Hofreiter at the University of Potsdam in Germany, a co-senior author who led the work on the straight-tusked elephant.

David Reich’s laboratory at Harvard Medical School generated genome-wide data from several ancient mastodon and mammoth genomes using samples prepared at Hofreiter’s laboratory and co-senior author Hendrik Poinar’s ancient DNA laboratory at McMaster University in Canada. Poinar said, “The combined analysis of genome-wide data from all these ancient elephants and mastodons has raised the curtain on elephant population history, revealing complexity that we were simply not aware of before.”

Eleftheria Palkopoulou, a post-doctoral scientist in Reich’s lab at HMS, led the analysis for the study.

“We were puzzled by the discrepancy between morphological and genetic results, but our analyses show that the ancestry of straight-tusked elephants was highly composite including three ancestral components,” said Palkopoulou. The paper reveals that the extinct giant descends from a mixture of lineages related to an ancient African elephant, the woolly mammoth, and the present-day forest elephant.

“The findings were extremely surprising to us,” said Palkopoulou. “The elephant population relationships could not be explained by simple splits, providing clues for understanding the evolution of these iconic species.” In fact, her analysis of whole elephant-genomes revealed multiple major interbreeding events between different ancient species, highlighting how this played a fundamental role in elephant evolution and raising the question of how widespread major admixture is in other species groups as well.

Future studies will need to explore the diversity of both living and ancient elephants and investigate population structure changes over distance and time.

“Obtaining a technicolor picture of elephant population structure may also be of immediate value for conservation efforts,” said Reich, pointing to work by colleagues showing that with sufficient genetic data black-market tusks can be localized to the regions in Africa from which they were obtained.

Approximately 50,000 elephants are killed each year from poaching, putting many populations in danger. The mastodons and mammoths, who were their close relatives, are gone. Understanding the genetic heritage of elephants has the potential to play a valuable role in future conservation efforts and in preventing these creatures from going extinct.