New under the sun: recurrent genetic mutations in melanoma 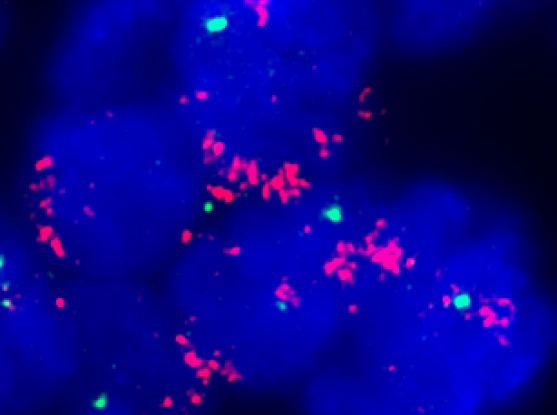 Melanoma – the deadliest and most aggressive form of skin cancer – has long been linked to time spent in the sun. Now a team led by scientists from the Broad Institute and Dana-Farber Cancer Institute has sequenced the whole genomes of 25 metastatic melanoma tumors, confirming the role of chronic sun exposure and revealing new genetic changes important in tumor formation.

In an article published online May 9 in Nature, the authors provide the first high-resolution view of the genomic landscape of human melanoma tumors. Previous genetic analyses have focused on the exomes of many types of cancer tumors, concentrating on the tiny fraction of the genome that provides the genetic code for producing proteins. Whole genomes contain a wealth of genetic information, and by sequencing and analyzing 25 metastatic melanoma tumors – a significant technical and computational feat – scientists can learn vastly more about the variety of genetic alterations that matter in melanoma.

“Sequencing the whole genome certainly adds a richness of discovery that can’t be fully captured with a whole exome,” said Levi A. Garraway, a senior associate member of the Broad Institute, an associate professor at Dana-Farber Cancer Institute and Harvard Medical School, and co-senior author of the paper.

“By looking across the entire genome you can more accurately determine the background mutation rate and the different classes of mutations, and more confidently describe the pattern of ultraviolet-induced mutagenesis in melanoma,” said Michael F. Berger, co-first author of the paper. He worked in the Broad’s cancer genome analysis group and with Garraway as a research scientist and computational biologist before moving to Memorial Sloan-Kettering Cancer Center.

When the scientists explored the whole genome data generated and analyzed at the Broad, they found that the rates of genetic mutations rose along with chronic sun exposure in patients, confirming the role of sun damage in disease development.

“Whole-genome analysis of human melanoma tumors shows for the first time the existence of many structural rearrangements in this tumor type,” said Lynda Chin, a senior associate member of the Broad and co-senior author of the paper. Formerly at Dana-Farber and Harvard Medical School, she is now chair of the Department of Genomic Medicine at the University of Texas MD Anderson Cancer Center.

As expected, the scientists detected known BRAF and NRAS mutations in 24 of the 25 tumors. Both genes are involved in sending signals important in cell growth.

One other gene leaped out: PREX2, previously implicated in breast cancer for blocking a tumor-suppressor pathway, was altered in 44 percent of patients. In a larger validation cohort of 107 tumors, the frequency of the mutation was 14 percent.

PREX2 is mutated in a convergence of genetic disruption that appears to accelerate tumor development. Its mutations occurred not just at hot spots that typically turn on an oncogene, a type of cancer-causing gene, and drive cancer forward. The alterations were also scattered across the length of the gene in a pattern typically seen when another type of cancer-causing gene, known as tumor suppressors, are turned off.

“The pattern of mutations here looks a lot more like a tumor suppressor gene, but from the functional experiments, it behaved more like an oncogene,” Berger said.

When PREX2 functions normally, it interacts with the protein PTEN. PTEN is well known as a tumor suppressor, controlling growth in normal cells. Mouse experiments in Chin’s lab at Dana-Farber showed that PREX2 mutations spurred tumor growth in ways that are not fully understood.

“We still can’t say we know exactly how it works,” Garraway said. “PREX2 may be in a very interesting new category of mutated cancer genes that point us to at least one and maybe more pathways that would be worth targeting therapeutically in melanoma.”

The identification of PREX2 may be the tip of the iceberg.

“New melanoma genes remain to be discovered by this unbiased approach, as illustrated by the discovery of PREX2 and the demonstration of its oncogenicity in vivo,” said Chin.