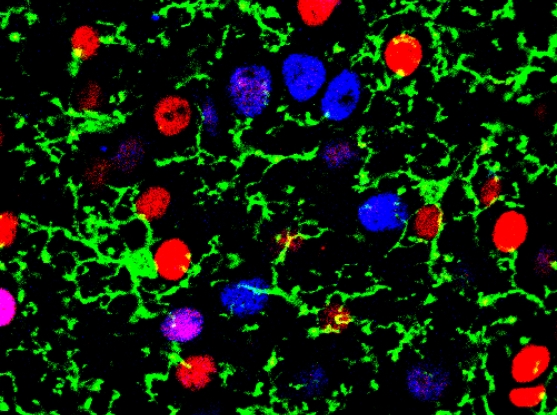 From everyday actions like walking and talking to feats of athletic or academic excellence, the brain is constantly acquiring and processing information to produce these incredible behaviors. One of the most fundamental questions in neuroscience remains how cells in the brain move, interact, and coordinate with each other to produce behavior. The process requires a whole orchestra of cells listening to each other and tuning their functions to harmonize together.

In the brain, this cellular symphony includes not only neurons, but also cells that normally play a role in defending the body against pathogens. These include tiny immune cells called microglia, which researchers are increasingly learning play oversized roles in brain function, health, and disease. The cells are also gaining increased attention in the field for their roles in assembling and maintaining neural circuits and how they can change their molecular identity to match their environment. To neuroscientists, the mystery has long been how they make this change.

In a new report in Nature, a team of researchers from the lab of Harvard University professor Paola Arlotta and from the Stanley Center for Psychiatric Research at the Broad Institute of MIT and Harvard come a step closer to answering this question. The paper shows that microglia cells “listen in” to neighboring neurons and change their molecular state to match them.

“When they were first discovered, microglia were assumed to be simply scavengers, cleaning up cell debris and helping to fight off pathogens,” says Jeffery Stogsdill, who led the study when he was a postdoctoral researcher in the Arlotta lab. “Now we know that microglia can interact with neurons in very sophisticated ways that can affect neuron function.”

The study provides unique insight into how different cell types work together in harmony.

“What we’re discovering here are the rules by which different cell types in the brain talk to each other and influence each other to ultimately be able to do more together,” said senior author Arlotta, the Golub Family Professor of Stem Cell and Regenerative Biology at Harvard University and an institute member at the Broad Institute.

In the paper, the scientists describe how neurons train microglia to work with them when they first meet, early in the life of the brain. The group found that during the formation of the cerebral cortex — a part of the brain responsible for skilled motor function, sensory perception, and cognition — different types of neurons influence the number and molecular state of nearby microglia in their own unique ways.

“These different types of cortical neurons recruit different numbers of microglia,” Stogsdill said. “They then pattern those microglia to tell them exactly what type they need to be.”

The cerebral cortex is organized into layers with different neuron types residing in each one. The researchers used genetic profiling methods to examine the microglia in the different layers and discovered that microglia varied in number and molecular state depending on the layer where they were found. The team then changed the composition of neuron types in these layers and found that they could influence the distribution of the different microglial states. The microglia matched the types of neurons in the new locations, confirming that the neurons were influencing them.

The research team then built a molecular atlas that outlines the communication between neurons and microglia. The team analyzed their profiling data to find pairs of interacting proteins expressed by the different microglial states and their neuron partners.  Such a molecular atlas could enable future research into the functional roles of these interactions and possible targets for therapeutic intervention. There is still a ways to go, but the researchers are hopeful they can get there. They plan to start by explaining exactly what the differences and functional distinctions are among the microglia in the different layers of the cerebral cortex.

This work was supported by grants from the Broad Institute of MIT and Harvard, the NIH, the Klarman Cell Observatory, and the Howard Hughes Medical Institute.