New study gets to heart of triglycerides’ role in coronary disease 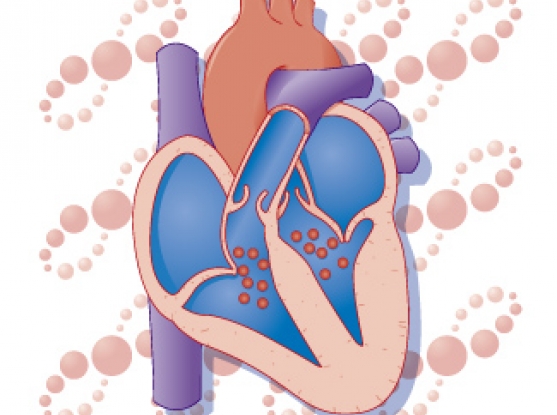 A team led by Broad Institute researchers has found that triglycerides - the fats that our bodies burn for fuel - play a causal role in coronary artery disease (CAD), the most common form of heart disease and the leading cause of death in the United States. The study, which leverages new genetic data from a related genome-wide association study, suggests that lowering triglyceride levels through treatment may help reduce the risk of CAD. The findings appear this week in Nature Genetics.

A team led by Broad Institute researchers has found that triglycerides - the fats that our bodies burn for fuel - play a causal role in coronary artery disease (CAD), the most common form of heart disease and the leading cause of death in the United States. The study, which leverages new genetic data from a related genome-wide association study, suggests that lowering triglyceride levels through treatment may help reduce the risk of CAD. The findings appear this week in Nature Genetics.

Every day, millions of vials of blood are drawn to assess patients’ risk for the disease. These tests measure three biomarkers, or factors in the blood known to be associated with CAD: low-density lipoproteins (LDL cholesterol), high-density lipoproteins (HDL cholesterol), and triglycerides. All three biomarkers are lipids – water-insoluble molecules that are among the structural and functional building blocks of living cells.

“The key question over the years about these biomarkers has been, which ones cause coronary artery disease and which ones are merely reflective of the disease process?” said Broad associate member Sekar Kathiresan, who led the study along with Broad senior associate member Mark Daly, associate member Ben Neale, and first author Ron Do, who is a postdoctoral fellow in Kathiresan’s lab. Kathiresan is also the director of preventive cardiology at Massachusetts General Hospital.

“The reason that question is important is not for prediction, because biomarkers are useful for predicting disease whether they are causal or not,” Kathiresan explained. “The reason we want to distinguish between these factors is for treatment. We really only want to attack the causes of the disease.”

LDL, the so-called "bad cholesterol," has already been proven to cause heart disease and is the target of the well-known, cholesterol-lowering drugs called statins. HDL, the "good cholesterol" once thought to directly reduce risk of CAD, has in recent studies shown no causal connection with coronary artery disease.

The role of triglycerides has remained a matter for debate. While elevated triglyceride levels are seen in patients with CAD, making it an effective biomarker, evidence that these blood fats play a causal role in the disease has been inconclusive, and treatments aimed at lowering triglyceride levels have not yet succeeded in reducing disease risk.

To determine whether triglycerides do, in fact, play a causal role in CAD, Kathiresan’s team looked at 185 variations in the genetic code that have been found to be associated with blood lipid traits. Such variations, called single nucleotide polymorphisims, or “SNPs,” are inherited from one or both parents and can affect the way an individual expresses a given trait.

The researchers looked at these SNPs in over 86,000 people and assessed the degree to which each SNP affected LDL, HDL, and triglyceride levels, as well as CAD risk. They then compared these effects. If SNPs that altered the level of a given biomarker also altered disease risk to the same degree, it could be assumed that the relationship between the biomarker and the disease was causal.

Kathiresan’s team previously applied this approach to LDL and HDL in studies that confirmed LDL’s causal role in heart disease, and cast doubt on any causal association between HDL and CAD. This new study, which relies on new genetic variants identified by the Global Lipids Genetic Consortium (GLGC) in a paper also published this week in Nature Genetics, confirms the previous findings while taking a fresh look at the role of triglycerides.

Kathiresan, who was also one of the leaders of the GLGC study, said that his team observed a pattern of association between triglycerides and CAD that resembled what they observed for LDL: the effects of these SNPs on triglyceride levels were highly associated with their effect on CAD risk, even after accounting for the potentially confounding effect of each SNP on HDL or LDL levels. The data strongly suggest that triglycerides are a causal factor in CAD.

Exactly how triglycerides may contribute to coronary artery disease is still undetermined. LDL cholesterol is known to cause CAD by contributing to the build-up of “plaque” along the artery walls. As these molecules are deposited, they block blood flow through the arteries, which can lead to heart attack. One hypothesis is that the lipoprotein particles that carry triglycerides in the blood stream (so-called triglyceride-rich lipoproteins) may deposit in the heart arteries in a manner similar to LDL.

The researchers suggests that, even as the exact causal mechanisms are worked out, targeting triglycerides for treatment may be an effective strategy for reducing heart disease risk.

“Clinically speaking, one of the ways to prevent a first heart attack or to reduce the risk of a second heart attack in someone who already has heart disease may be to treat patients with medicines that lower the levels of triglyceride-rich lipoproteins,” Katherisan said. “Some drugs that target triglycerides are already being tested; it is now a matter of finding the right mechanism of lowering triglycerides that will effectively reduce disease risk.”

Raising HDL not a sure route to countering heart disease