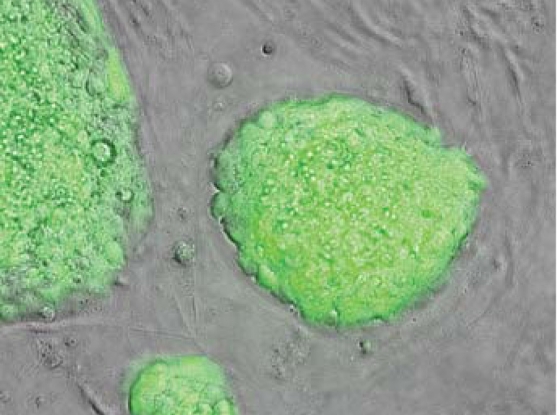 Scientists at the Broad Institute of MIT and Harvard have discovered that a mysterious class of large RNAs plays a central role in embryonic development, contrary to the dogma that proteins alone are the master regulators of this process. The research, published online August 28 in the journal Nature, reveals that these RNAs orchestrate the fate of embryonic stem (ES) cells by keeping them in their fledgling state or directing them along the path to cell specialization.

Broad scientists discovered several years ago that the human and mouse genomes encode thousands of unusual RNAs — termed large, intergenic non-coding RNAs (lincRNAs) —but their role was almost entirely unknown. By studying more than 100 lincRNAs in ES cells, the researchers now show that these RNAs help regulate development by physically interacting with proteins to coordinate gene expression and suggest that lincRNAs may play similar roles in most cells.

“There’s been a lot of debate about what lincRNAs are doing,” said Eric Lander, director of the Broad Institute and the senior author of the paper. “It’s now clear that they play critical roles in regulating developmental decisions — that is, cell fate. This was a big surprise, because specific types of proteins have been thought to be the master controls of development.”

“This is the first global study of lincRNAs,” said Mitchell Guttman, first author of the paper and a graduate student at MIT and the Broad Institute. “We picked embryonic stem cells in particular because they are so important to development and so well understood. This allowed us to dissect the role of lincRNAs within the circuitry of a cell.”

The researchers used genetic tools to inhibit more than 100 lincRNAs and found that the vast majority — more than 90 percent — had a significant impact on embryonic stem cells, indicating that the RNAs play a key role in the cells’ circuitry.

Embryonic stem cells can follow one of two main routes. They can either differentiate, becoming cells of a specific lineage such as blood cells or neurons, or they can stay in a pluripotent state, duplicating themselves without losing the ability to become any cell in the body. When the researchers turned off each lincRNA in turn, they found dozens that suppress genes that are important only in specific kinds of cells. They also found dozens of lincRNAs that cause the stem cells to exit the pluripotent state.

The researchers also uncovered a critical clue about how lincRNAs carry out their important job. Through biochemical analysis, they found that lincRNAs physically interact with key proteins involved in influencing cell fate to coordinate their responses.

“The lincRNAs appear to play an organizing role, acting as a scaffold to assemble a diverse group of proteins into functional units,” said John Rinn, an author on the paper, an assistant professor at Harvard University and Medical School, and a senior associate member of the Broad Institute. “lincRNAs are like team captains, bringing together the right players to get a job done.”

“By understanding how these interactions form, we may be able to engineer these RNAs to do what we want them to do,” said Guttman. “This could make it possible to target key genes that are improperly regulated in disease.”

Aviv Regev, an author on the paper, a core member of the Broad Institute, and associate professor at MIT, sees the team’s approach to studying the lincRNAs as important for the field. “Many people are interested in lincRNAs, but they need a comprehensive view of the whole collection of lincRNAs,” said Regev. “The large-scale data and technology from this study will be useful for scientists worldwide in studying both lincRNAs as well as many other RNAs in the cell.”

From the BroadMinded Blog:
Venturing into noncoding RNA