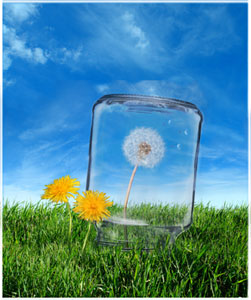 A multi-institutional team of Boston-area researchers has discovered a chemical that works in mice to kill the rare but aggressive cells within breast cancers that have the ability to seed new tumors.

These cells, known as cancer stem cells, are thought to enable cancers to spread — and to reemerge after seemingly successful treatment. Although further work is needed to determine whether this specific chemical holds therapeutic promise for humans, the study shows that it is possible to find chemicals that selectively kill cancer stem cells. The scientists’ findings appear in the August 13 advance online issue of Cell.

"Evidence is accumulating rapidly that cancer stem cells are responsible for the aggressive powers of many tumors,” says Robert Weinberg, a Member of Whitehead Institute for Biomedical Research and one of the authors of the study. "The ability to generate such cells in the laboratory, together with the powerful techniques available at the Broad Institute, made it possible to identify this chemical. There surely will be dozens of others with similar properties found over the next several years."

"Many therapies kill the bulk of a tumor only to see it regrow,” says Eric Lander, Director of the Broad Institute of MIT and Harvard, and an author of the Cell paper. “This raises the prospect of new kinds of anti-cancer therapies."

An emerging idea in cancer biology is that tumors (breast, prostate, colon, lung, etc.) harbor a group of cells with the unique ability to regenerate cancers. In addition to promoting tumor growth, these so-called cancer stem cells are largely resistant to current cancer therapies. If it were possible to identify chemicals that selectively kill cancer stem cells, such chemicals might become critical candidates for future drug development.

However, researchers have struggled to study cancer stem cells directly in the laboratory. The cells' relative scarcity compared to other tumor cells, combined with a tendency to lose their stem cell-like properties when grown outside of the body, have severely limited the amount of material available for analysis.

To overcome these hurdles, Broad and Whitehead Institute researchers drew upon recent findings from Weinberg and his colleagues that suggested a way to generate in the laboratory large numbers of cancer cells with stem cell-like qualities. The technique works by coaxing adult cells to undergo a critical change (known as an "epithelial-to-mesenchymal transition") that alters their shape and motility. At the same time, the cells also adopt similar properties as stem cells.

"A critical aspect of our work was to generate relatively homogenous and stable populations of cancer stem-like cells that could then be used for screening," says Tamer Onder, a former graduate student in Weinberg's lab and co-first author of the study. (Onder is now a postdoctoral research fellow at Children’s Hospital in Boston.) "We were able to achieve this by inducing the cancer cells into an epithelial-to-mesenchymal transition using novel reagents that we had developed in the lab."

With an ample number of stem cells in hand, the Broad-Whitehead team undertook a large-scale analysis of thousands of chemical compounds, applying automated methods to search for ones with activity against breast cancer stem cells. From a pool of more than 30 promising candidates, the researchers identified a compound with surprising potency.

The compound, called salinomycin, kills not only laboratory-created cancer stem cells, but also naturally occurring ones. Compared to a common chemotherapeutic drug prescribed for breast cancer (known as paclitaxel), salinomycin reduced the number of cancer stem cells by more than 100-fold. It also diminished breast tumor growth in mice.

To further dissect the function of salinomycin, the researchers also examined its genetic effects. Previous studies of tumors from breast cancer patients have revealed groups of genes that are highly active in cancer stem cells. Many of these same genes are linked with particularly aggressive tumors and poor patient prognoses. The researchers' studies show that salinomycin (but not paclitaxel) treatment can decrease the activity of these genes, revealing a possible molecular basis for the chemical's biological effects.

"Our work reveals the biological effects of targeting cancer stem cells," says co-first author Piyush Gupta, a researcher at the Broad Institute. "Moreover, it suggests a general approach to finding novel anti-cancer therapies that can be applied to any solid tumor maintained by cancer stem cells."

Although the new findings signal a noteworthy scientific milestone, it is still too early to know whether cancer patients will reap benefits from it. Additional research is needed to determine exactly how salinomycin works to kill cancer stem cells and if it can wield the same tumor-reducing power in humans as it does in mice. These types of analyses generally take several years to complete.

But even with such tempered enthusiasm, there is also cause for optimism. In the current study, just 16,000 chemical compounds were tested, of which a small subset showed toxicity against cancer stem cells. Therefore, deeper investigations of these compounds as well additional tests of broader collections of chemicals may yield other potential additions to the anti-cancer arsenal.

About the Whitehead Institute for Biomedical Research

Whitehead Institute for Biomedical Research is a nonprofit, independent research and educational institution. Wholly independent in its governance, finances and research programs, Whitehead shares a close affiliation with Massachusetts Institute of Technology through its faculty, who hold joint MIT appointments. For additional information about Whitehead Institute, please visit www.whitehead.mit.edu.

The Eli and Edythe L. Broad Institute of MIT and Harvard was founded in 2003 to empower this generation of creative scientists to transform medicine with new genome-based knowledge. The Broad Institute seeks to define all the molecular components of life and their connections; discover the molecular basis of major human diseases; develop effective new approaches to diagnostics and therapeutics; and disseminate discoveries, tools, methods and data openly to the entire scientific community.

Founded by MIT, Harvard and its affiliated hospitals, and the visionary Los Angeles philanthropists Eli and Edythe L. Broad, the Broad Institute includes faculty, professional staff and students from throughout the MIT and Harvard biomedical research communities and beyond, with collaborations spanning over a hundred private and public institutions in more than 40 countries worldwide. For further information about the Broad Institute, go to www.broad.mit.edu.