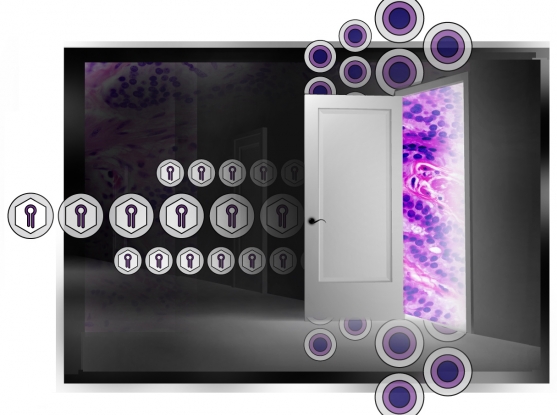 Colon cancer is one of the leading causes of cancer-related death in the United States. Risk factors for the disease are varied and include factors such as advanced age and diet, but most cases share something crucial that scientists hope can usher in new treatments. In nearly all cases, the DNA in colon tumors harbors mutations in a key intracellular process or “pathway,” leading to the buildup of proteins that drive uncontrolled growth of cells.

Because disruptions in this pathway, known as the Wnt/beta-catenin pathway, are so ubiquitous in colon cancer and other cancers, it represents a promising target for developing therapeutics. However, scientists have so far been unsuccessful in targeting the pathway. Broad Institute senior associate member William Hahn, who is also an associate professor at the Dana–Farber Cancer Institute and Harvard Medical School, describes the situation as being stuck in a room with only one exit. Scientists thought that beta-catenin had only one partner protein, a transcription factor called TCF4, through which it worked to initiate and drive cancer. With no way to target TCF4, it was as though the single door to a potential new therapy remained locked.

A new door may now be open, thanks to an ambitious effort from researchers at the Broad Institute and Dana-Farber Cancer Institute. The work, led by Hahn and made possible by the Broad’s large-scale RNA interference and cell line resources, reveals an alternative pathway through which beta-catenin drives cancer, one that may be more amenable to therapeutic targeting. The findings appear online December 13 in the journal Cell and help suggest an expanded role for proteins like beta-catenin — that they may have more than one path in the cell and more than one role in cancer.

The new study was motivated not only by the desire for new therapeutic targets, but also by the need for a deeper understanding of beta-catenin’s workings in the cell. Recent genome sequencing studies, some completed at the Broad, revealed that beta-catenin’s traditional partner protein, TCF4, was actually missing or inactivated in more than a quarter of cases of colon cancer. The absence of this key partner suggested that beta-catenin had other partner proteins — indicating potential hidden pathways through which it worked to cause cancer.

To begin the hunt for a new pathway, the team set out to find genes that were essential to the survival of cancers driven by beta-catenin, representing its potential partners in the cell. They first classified 85 cell lines from the Broad-Novartis Cancer Cell Line Encyclopedia based on whether beta-catenin was activated (as it is in most colon cancers) or not. In parallel, they analyzed data on those cell lines from an RNA interference screen completed as part of the Cancer Program’s Project Achilles, which identified genes essential for the survival of cancer cells, the so-called “Achilles heels” of cancer.

The results pointed to genes that regulate a protein called YAP1, which controls the activity of other genes. Through extensive follow-up work in cellular and animal models, the team discovered a new complex of proteins that work together with beta-catenin to regulate the transcription, or activity, of genes that drive cancer. Further, they found that the new complex is regulated by YES1, an enzyme in the kinase family of proteins that have proven to be more amenable to therapeutic targeting than transcription factors. The team was even able to use a small molecule to inhibit YES1, blocking the activity of the complex and halting the growth of cancer cells.

“It’s a bit of a surprising finding because most of us thought that beta-catenin has one partner — TCF4 — that’s responsible for all its roles in cancer,” said Hahn. The new results help explain how cancer cells without a working TCF4 protein could still be cancerous. “By finding that there’s another set of partners that beta-catenin could have, it helps explain those findings and it may allow us to have an idea about how these complexes play different roles at different stages of tumor development.”

The discovery of beta-catenin’s new pathway was made possible by the Broad’s resources for large-scale, systematic exploration, in addition to informatics expertise. “We’ve been studying this pathway for twenty years, and we didn’t recognize that there was this other, very important component of it,” said Hahn. “It’s because we didn’t have the tools to do it until now.”

“This work demonstrates the power of Project Achilles and the advantage of using so many cell lines,” said Joseph Rosenbluh, first author on the study. “We could identify new things, simply because we have larger numbers than ever before.”

The findings reveal a new branch of the Wnt/beta-catenin pathway that’s likely important in development and cancer. In addition, targeting the pathway through the YES1 kinase may successfully prevent tumor growth in a large percentage of patients, if a safe and effective targeting therapy were developed. The team is currently looking into further studies of an existing drug that is FDA-approved for other conditions and that targets YES1. Finding a way to target the pathway could make a significant impact on the treatment of this disease, because it is altered in such a large proportion of cases. As Rosenbluh explained, “Finding a way to target beta-catenin will allow us to target all colon cancers.”

The work also demonstrates that systematic studies of the function of genes are a very good complement to those aimed at characterizing cancer genomes. “As genome sequencing in cancer and other conditions becomes cheaper and more routine, the emphasis must shift to the understanding of the function of genes,” Hahn said. “This is a good example of how we’re moving in parallel [to sequencing studies] to do that.”

The new pathway increases the complexity of beta-catenin’s role in the cell, but offers significant opportunities, too. “This complexity we’ve uncovered is probably going to get us closer to understanding how things really work,” said Hahn. “A new door has been opened that tells us there are many other ways we can understand this pathway, and that gives us new opportunities to think about intervening. YES1 is a really promising one, but it may be just the first of many things to come.”

Video: A growing role for beta-catenin in colon cancer

1,092 genomes and counting
Chromatin marks the spot in search for disease pathways