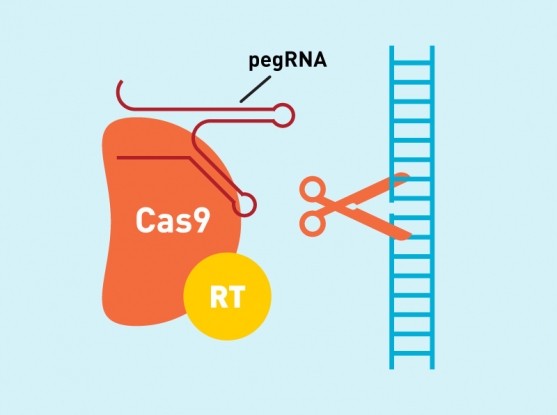 “Prime editing” combines two key proteins and a new RNA to make targeted insertions, deletions, and all possible single-letter changes in the DNA of human cells

A team from the Broad Institute of MIT and Harvard has developed a new CRISPR genome-editing approach by combining two of the most important proteins in molecular biology — CRISPR-Cas9 and a reverse transcriptase — into a single machine.

The system, called “prime editing,” is capable of directly editing human cells in a precise, efficient, and highly versatile fashion. The approach expands the scope of gene editing for biological and therapeutics research, and has the potential to correct up to 89 percent of known disease-causing genetic variations.

“A major aspiration in the molecular life sciences is the ability to precisely make any change to the genome in any location. We think prime editing brings us closer to that goal,” says David Liu, core institute member, Richard Merkin Professor, vice chair of the faculty, and director of the Merkin Institute of Transformative Technologies in Healthcare at the Broad Institute of MIT and Harvard. “We’re not aware of another editing technology in mammalian cells that offers this level of versatility and precision with so few byproducts.”

Liu is the senior author of a paper published today in Nature describing prime editing. The research was also led by first author Andrew Anzalone, a Jane Coffin Childs postdoctoral fellow in Liu’s lab at the Broad Institute.

Prime editing differs from previous genome-editing systems in that it uses RNA to direct the insertion of new DNA sequences in human cells. 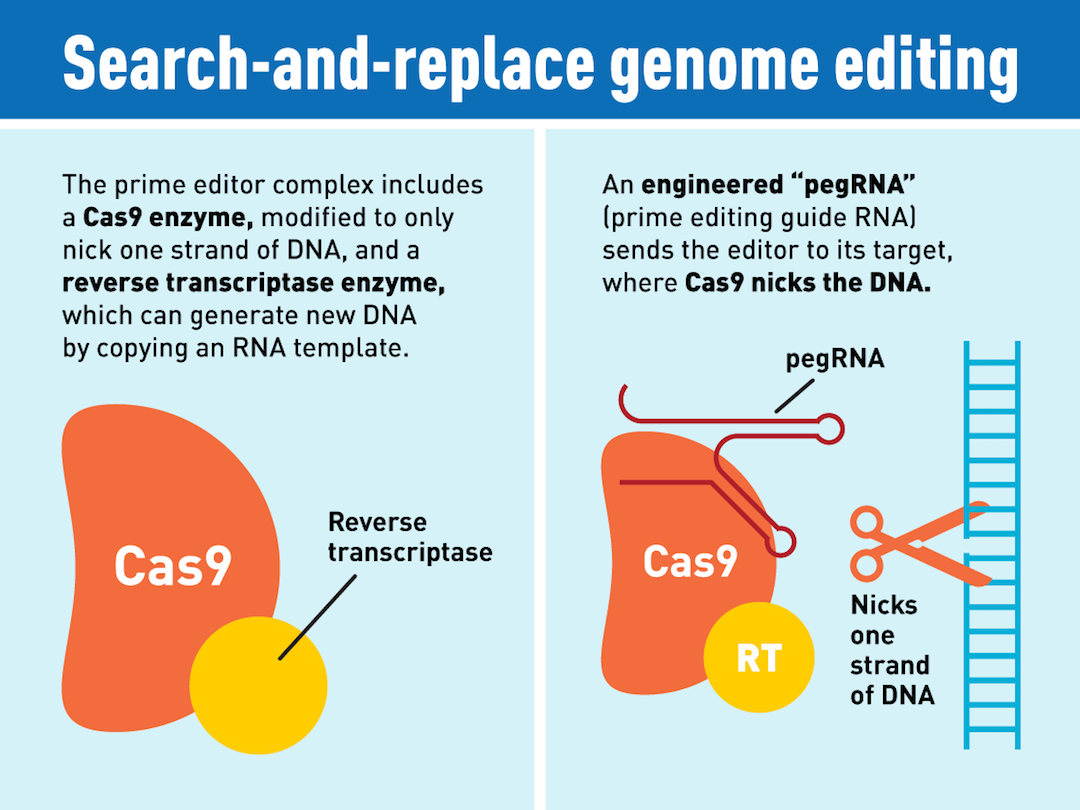 Infographic: How does prime editing work?

The first CRISPR tool harnessed for genome editing in human cells, pioneered at the Broad Institute, MIT, and Harvard, was the Cas9 protein. Cas9 makes nearby breaks on each DNA strand, cutting the DNA entirely. These tools can disrupt target genes at a specific location and then make it possible to add new sequences through recombination of new DNA into the site, directed by the cell itself.

Base editors, first developed by Liu’s laboratory, build on this technology, fusing Cas9 to proteins that can perform chemical reactions to change a single letter of DNA into another. Current base editors can make four types of single-base changes efficiently: C-to-T, T-to-C, A-to-G, and G-to-A.

The new prime editing system involves coupling Cas9 to a different protein called reverse transcriptase. The molecular complex uses one strand of the target DNA site to “prime,” or initiate, the direct writing of edited genetic information into the genome.

A new type of engineered guide RNA, called a pegRNA, directs the prime editor to its target site, where a modified Cas9 cuts one strand of the DNA. The pegRNA also contains additional RNA nucleotides encoding the new edited sequence. To transfer this information, the reverse transcriptase element reads the RNA extension and writes the corresponding DNA nucleotides into the target spot.

Edits made to order

In the Nature paper, the team demonstrated prime editing’s ability to precisely correct gene variants that cause sickle-cell anemia, requiring the conversion of a specific T to an A, and Tay Sachs disease, requiring the removal of four DNA letters at a precise location in the genome.

The researchers further report a variety of successful edit types in human cells and primary mouse neurons, including all 12 possible ways to replace one DNA letter with another, insertions of new DNA segments up to 44 DNA letters long, precise deletions of up to 80 DNA letters, and modifications combining these different types of edits.

“With prime editing, we can now directly correct the sickle-cell anemia mutation back to the normal sequence and remove the four extra DNA bases that cause Tay Sachs disease, without cutting DNA entirely or needing DNA templates,” says Liu, who is also a professor of chemistry and chemical biology at Harvard University and a Howard Hughes Medical Institute investigator. “The beauty of this system is that there are few restrictions on the edited sequence. Since the added nucleotides are specified by the pegRNA, they can be sequences that differ from the original strand by only one letter, that have additional or fewer letters, or that are various combinations of these changes.”

“The versatility of prime editing quickly became apparent as we developed this technology,” recalls Anzalone. “The fact that we could directly copy new genetic information into a target site was a revelation. We were really excited.”

When making precision changes, the researchers report that prime editing achieves successful edits with a lower rate of undesired “off-target” changes when compared to approaches that require making nearby breaks on each DNA strand. Prime editing can also make precise single-nucleotide changes in target sequences that base editors have difficulty accessing, according to the team’s data.

Liu’s team intends to continue optimizing prime editing, including by maximizing its efficiency in many different cell types, further investigating potential effects of prime editing on cells, additional testing in cell and animal models of disease, and exploring delivery mechanisms in animals to provide a potential path for human therapeutic applications.

The researchers and the Broad Institute are making this technology freely available to the academic and non-profit communities, including by sharing vectors through the non-profit Addgene. For these groups, no license is necessary.

The Broad Institute is making prime editing tools available to license non-exclusively for research and manufacturing by companies, and for the commercial development of tools and reagents. For human therapeutic use, Broad Institute has licensed the technology to Prime Medicine under the inclusive innovation model. As has been publicly reported, Beam Therapeutics has received a sublicense from Prime Medicine for the use of prime editing in certain fields and for certain applications. (Liu is a consultant and co-founder of both Prime Medicine and Beam Therapeutics.)