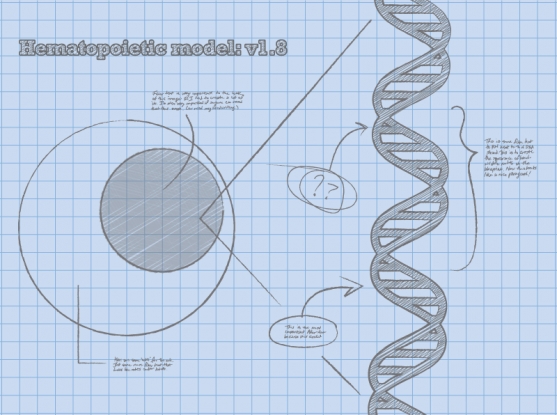 One major challenge in cancer research is developing robust pre-clinical models for new therapies, ones that will accurately reflect a human response to a novel compound. All too often, a potential treatment that initially looked promising in cells or animal models will not have the same effects in a human cancer patient.

Given the enormous costs of clinical trials, researchers need pre-clinical models that accurately reflect human disease genetics and reliably predict which drugs have the most potential to succeed in patients. In Cell Stem Cell this week, a team led by Zuzana Tothova, a postdoctoral scholar at the Broad Institute of MIT and Harvard and instructor in medicine at Dana-Farber Cancer Institute (DFCI), and Broad institute member Ben Ebert, also a professor of medicine at Harvard Medical School and chair of medical oncology at DFCI, describe a new approach that has the potential to make this leap.

Using multiplex CRISPR-Cas9 editing of human hematopoietic, or blood-forming, stem cells followed by transplantation in mice, the team designed customized mouse models for the progression of leukemia. In a number of different experiments, the animal models successfully reflected human responses to a therapeutic agent commonly used to treat blood cancers. “With our models, we can really test — in a very controlled fashion, in the right setting, and using the right cells — the genetic predictors of response to specific agents,” said Tothova.

The research team started by examining large-scale sequencing data from Ebert’s lab and The Cancer Genome Atlas to determine which combinations of mutations occur most commonly in myelodysplastic syndrome (MDS) and acute myeloid leukemia (AML), blood cancers in which the bone marrow fails to produce healthy blood cells. The researchers landed on nine genes that are recurrently mutated in MDS and AML.

Currently, many cancer models (such as cell lines) do not reflect the cancer genetics that a particular investigator would like to study, which often leaves both researchers and patients at a disadvantage. One strategy is to transplant an actual human cancer sample into a mouse, but the cancer tissue often doesn’t engraft well, and researchers are only able to test against the specific combination of mutations accumulated in a given cancer sample in the first place.

To study these specific MDS-driving mutations in combination, the team developed a pipeline to insert them into new lab models.

“Say we’re trying to develop a new drug against a particular combination of mutations, which we know about through the cancer sequencing efforts,” said Tothova. “You might not have any sample available to study with that particular combination of mutations. We wanted to be able to engineer the right lesions in human cells, let them expand in mice, and generate an accurate genetic model of disease for testing new therapies. This has been a longstanding goal for cancer researchers, and for the pharmaceutical industry, for a very long time.”

To create models with the right mutations, Tothova and her team established a customizable system to introduce the cancer-driving mutations into human hematopoietic stem cells, where MDS and AML originate. The researchers already had extensive experience working with hematopoietic stem cells and progenitor cells, largely from umbilical cord blood or adult bone marrow, and in 2014, they published a Nature Biotechnology paper in which they described using the CRISPR-Cas9 system to create similar models of mouse cancers. This time, the team was aiming to model MDS in human cells, a much more challenging goal.

The researchers took primary cells from healthy donors and used CRISPR-Cas9 to engineer them with a number of different mutation combinations, rather than a single alteration, in order to reflect the complexity of tumor mutations seen in patients. The combinations of mutations that the cells tolerated — those that successfully altered the genes without killing the cells — and that led to expansion over time were also the ones seen in human tumor samples.

“Nobody so far has done this kind of multiplex CRISPR engineering in the actual hematopoietic stem cell compartment, adding specific mutations in combination to generate disease models,” said Tothova.

From there, the team injected the stem cells into the mice’s circulatory systems, where a portion incorporated themselves into the bone marrow. The team monitored their progression, extracting and sequencing the human cells five months later to determine which engineered cells successfully propagated and which mutations became the most common over time in these pre-malignant and early malignant states.

The mainstay of treatment for MDS patients are hypomethylating agents called azacitidine and decitabine. Based on previous studies, the team identified specific genetic mutations that could be used to predict cancer cells’ response to these compounds in humans. (For example, mutations in a gene called TET2 predict treatment success for MDS patients, while mutations in the ASXL1 gene predict resistance in the tumors.)

When the researchers treated the mice with azacitidine, they found that the response in the engineered cells matched what was expected from the human data: TET2-mutated cells responded to the drug, while ASXL1-mutated cells were resistant to the therapy. The team also discovered that mutations in a cohesin gene, SMC3, increased sensitivity to the drug — data that could be important to clinicians and patients whose tumors share those mutations.

“We are able to recapitulate findings previously seen in human clinical trials, which makes us feel more confident in the power of these models,” said Tothova. “The data that comes from patients reflects the most important experiment we are trying to understand.” She is currently working with clinical collaborators at DFCI to extend some of these findings into clinical trials.

The team believes their approach to create this type of leukemia progression model for therapeutic testing can be applied to other types of cancer as well, as long as sequencing data is available to choose appropriate mutations and progenitor cells can be acquired from the desired tissue. “People in the field are hungry for these kinds of models,” said Ebert. “We are modeling the disease in the right cellular context with a genetic complexity that reflects what we see in patients. This hasn’t been done before, and it could become a really beneficial tool.”

This project was supported in part by funding from the Broad Institute’s BroadIgnite program, which connects rising philanthropists to emerging scientists pursuing high-risk — and potentially high-reward — ideas.

New CRISPR tool targets RNA in mammalian cells
To cross the therapeutics finish line, we need to change the race