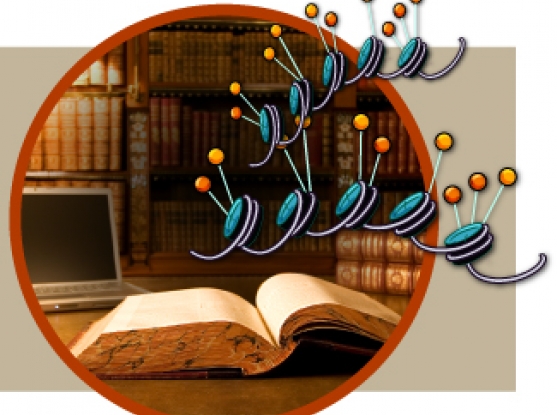 There is no final chapter in the Cancer Cell Line Encyclopedia. Like many resources and tools in biomedicine, researchers are rewriting and expanding this metaphorical book. The encyclopedia has grown well beyond genomes and now contains many different pieces of information on 1,000 cell lines representing more than 20 different kinds of cancer.

Research scientist Jacob Jaffe and his colleagues in the Broad Institute’s Proteomics Platform have been rounding out this resource with a new layer of information related to the proteins around which DNA gets wrapped in the cell. Using the Cancer Cell Line Encyclopedia (CCLE) as a reference guide, the researchers narrowed in on a potential therapeutic target in pediatric acute lymphoblastic leukemia (ALL), a white blood cell cancer most common in early childhood. By combining information from the CCLE, teaming up with clinical researchers, and leveraging a new invention from the proteomics group, a team of researchers from the Broad, Novartis Institutes for Biomedical Research, and St. Jude Children’s Research Hospital has pinpointed a promising target in this form of cancer. Their results appear online in Nature Genetics this week.

Inside every cell, DNA is wound around proteins known as histones. These spools of DNA and protein are collectively known as chromatin. DNA can be unspooled and read out in various ways depending upon what cell it resides in. Small additional chemical groups, known as chromatin marks, guide this process. These marks are of great interest to researchers, in part because when something goes amiss, it can lead to diseases such as cancer.

“Effectively, what these chromatin marks do is add a fine layer of control on top of the genome, helping determine which genes get transcribed or expressed, and how much or how little, and which genes get silenced,” said Jaffe, co-first author of the Nature Genetics paper.

Jaffe and his colleagues at the Broad engineered a way of using a remarkably precise technology known as mass spectrometry to find out how levels of these marks are modulated in various types of cancer. The technique, known as Global Chromatin Profiling, allowed them to detect the molecular signature that chromatin marks leave on the genome.

“When you put more chemistry onto a protein, you can change its mass,” said Jaffe. “We can, very accurately with mass spectrometry, detect these changes.”

The researchers looked at 115 cancer cell lines from the CCLE, examining 42 combinations of chemical modifications attached to histones. They found several intriguing patterns in the resulting data, including a cluster around a gene called NSD2.

NSD2 had previously been implicated in cancer – it’s an enzyme responsible for adding a particular pattern of chemical marks to chromatin. The research team found several cell lines with alterations in NSD2. Some had a previously known translocation – a chunk of DNA that had broken off and reattached elsewhere in the genome. But others had a specific mutation that had not been spotted in cancer before: a single “letter” change in the gene that appeared to have the same damaging echoes throughout the genome as the translocation.

To find out more about NSD2, researchers at Novartis and St. Jude’s performed structural work, modeling the structure so that the team could see a clearer picture of what was likely happening to the enzyme as a result of the mutation. The researchers also recapitulated the mutation, inserting it into the genomes of cells in the dish and watching the results.

“We found that introducing the mutation made the activity of the enzyme much higher, and made the cells invasive and more cancer-like,” said Jaffe. In the lab, silencing the mutated form stopped the growth of these cancer-like cells.

Concurrently, scientists working on the St. Jude Children’s Research Hospital – Washington University Pediatric Cancer Genome Project conducted a study of pediatric cancers, including ALL, by gathering sequencing data from human patients. For CCLE, cancer genomes are sequenced from cells cultured in the lab – known as cell lines. Although cell lines can serve as an important model, data from human patients can offer an added layer of certainty and understanding in cancer genomics. The researchers found the same NSD2 mutation in patients with several subtypes of pediatric ALL that the researchers at the Broad had detected in the lab.

“We’ve shown what this enzyme is doing. We’ve showed that a mutation causes cells to become invasive. We’ve shown that inhibiting the mutated form of NSD2 reverses that. And now, we’re seeing that mutation in patients,” said Jaffe. “All of this suggests that perhaps designing a drug that targets this enzyme could be an important next step.”

Co-senior author Levi Garraway, a Broad senior associate member and a medical oncologist at Dana-Farber Cancer Institute, leads the CCLE efforts at the Broad and helped bring together collaborators from various institutions. “This project exemplifies one of the major goals of CCLE, which is to provide a preclinical resource of deeply annotated human cancer cell lines that can catalyze discovery,” said Garraway. “By bringing together the strengths of academia, industry, and the clinic, this work has shown how proteomics in general—and knowledge of global chromatin modifications in particular—can be used to illuminate a potential target for a devastating disease.”