Muscling in on a mystery protein 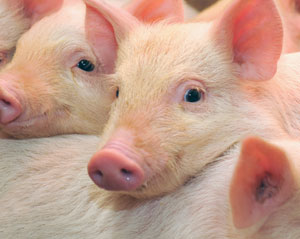 The domestic pig breed known as "large white" is much more muscular than its ancestor, the wild boar.
Image courtesy of iStockphoto.com

For thousands of years, humans have bred pigs for desirable traits, such as more muscle and less fat in the meat. Domestication makes animals ideal models for studying how genes control physical traits because when humans selectively breed animals for the best physical features, they are also selecting for the genes controlling those traits.

Now, a collaboration between researchers at the Broad Institute and Uppsala University in Sweden has found what makes a meatier pig. The researchers identified a novel protein that not only controls pig muscle growth and fat deposition, but also appears to play a much larger role in the genome than expected. Appearing in the December 15 issue of PLoS Biology, the work was made possible, in part, by technological innovations developed at the Broad.

Modern domestic pigs are much more meaty and less fatty than their ancestor, the wild boar. Professor Leif Andersson of Uppsala University in Sweden set out in the 1990s to identify what elements in the pig genome might control this muscle growth. Identifying the genes that cause meatier swine might enable smarter breeding programs, reducing the number of animals that need to be raised to generate the same amount of meat.

By mating European wild boars with Large White domestic pigs, Andersson and his research team homed in on a genetic variation in a gene known as IGF2, which encodes a growth factor protein that can stimulate tissue growth. By 2003, the team discovered that domestic pigs carried a single-letter change, known as a SNP, within the IGF2 gene. That change prompted the production of more growth factor, making the swine more muscular. The scientists suspected that something else could be at play: a protein in the cell nucleus might be latching on to DNA at the SNP in the IGF2 gene and changing how much growth factor it produced, potentially accounting for the differences in pig and boar muscle mass. Through laboratory experiments, the team learned that their hunch was right — a protein was binding the boar version of the IGF2 gene, but not the domestic pig version. But it would take years of work and a transatlantic partnership to uncover IGF2’s teammate in the cell.

Andersson’s team spent years searching for this mystery protein, but could not find it with the techniques available at the time. A breakthrough came after discussions in 2005 among the Uppsala team and researchers at the Broad, including Kerstin Lindblad-Toh, a lead researcher on the new study, Scientific Director of Vertebrate Genome Biology at the Broad, and professor at Uppsala University. Lindblad-Toh and members of her team had been working with scientists in the Broad’s Proteomics Platform, including director Steve Carr, Jake Jaffe, and Andreas Gnirke, on a new method for probing the interactions between protein and DNA.

Andersson and his team had an interesting finding — the IGF2 variant in pigs — but needed a direct, quantitative way to hunt for its partner in the genome. The Broad scientists realized that the proteomic method was ideal for hunting the mystery protein that binds IGF2 and regulates pig muscle mass. “Together with these excellent collaborators we had an important biological question to use to prove the novel methodology. It just snowballed from there,” said Lindblad-Toh.

The Broad researchers had been perfecting a new way of identifying proteins that stick to certain regions of DNA and that may play a role in turning genes on and off. Finding the proteins that bind DNA may reveal how they control certain traits or risk for disease. But doing so using traditional methods had been a tricky venture and required much guessing. With expertise of the Broad’s proteomics scientists, the collaborators decided to hunt for IGF2’s partner using a technique known as mass spectrometry, which can precisely identify proteins in a sample by their mass. “What mass spectrometry lets you do is directly observe the protein,” said Jaffe, a research scientist at the Broad and co-author of the new study. “That’s a big innovation, because there’s no need for guessing.”

Another innovation allowed the researchers to easily see on the mass spectrometry machine which protein was latching on to pig and boar DNA differently. This method, known as SILAC (stable isotope labeling with amino acids in cell culture), was developed by Matthias Mann and Shao-En Ong, a researcher now in the Broad’s Proteomics Platform. SILAC allows cells to naturally produce proteins that contain "heavy" atoms like carbon-13 and nitrogen-15. To look for the mystery protein, one version of DNA (say, the wild boar version) was exposed to "heavy" proteins made by the SILAC technique, while the other (the domestic pig version) was exposed to "light" proteins. The technique allowed the scientists to distinguish IGF2’s partner protein from other proteins in the cell. “Mass spectrometry is awesome at weighing things, so if you have a light version and a heavy version of something, the difference is night and day,” said Jaffe.

Using SILAC and mass spectrometry, the Broad team discovered a novel protein they named ZBED6. The protein binds the ancestral pig version of IGF2, but not the domestic pig version, suggesting that it was the mystery protein mediating IGF2’s effects on muscle mass and fat.

Senior author on the new study, Andersson and fellow researchers at Uppsala followed up with thorough molecular experiments to confirm that ZBED6 was, in fact, binding to IGF2 and controlling how much IGF2 protein was made by cells. ZBED6 appears to function as a “repressor,” limiting the activity of IGF2 in the ancestral pig genome and repressing muscle growth in boars. The mutation in IGF2 found in domesticated pigs prevents ZBED6 from binding and allows much more growth factor to be made, resulting in meatier, less fatty tissue.

The researchers also wanted to characterize the protein to understand how it worked. They discovered that the gene encoding ZBED6 is highly similar among placental mammals and only remnants are present in the genomes of marsupials, suggesting that it is a very old gene that is essential to the health of pigs, humans, and other placental mammals. The work also revealed that ZBED6 is a “transposon” — a piece of DNA that inserted into the genome at some point in evolution. It sits within another gene along the genome, so had not been characterized when the human genome was sequenced, making it even more unlikely that it could have been discovered without the mass spectrometry approach.

Surprisingly, the work revealed this mysterious protein’s far reach in the genome. In addition to IGF2, it binds to about 2,500 places in the genome, many of which are relevant to human illnesses such as cardiovascular, inflammatory, and neurological disease, in addition to cancer. “It looks like this factor could be a very important regulator that somehow controls the expression of many different important genes in our body,” said Lindblad-Toh. Scientists at Uppsala are continuing to study this new protein to fully understand its effects on both pig development and human health.

The work is the first biological finding to result from the Broad’s innovative use of SILAC, mass spectrometry, and DNA bait. “This is one of the first examples where the biological function of the DNA-interacting protein, and not just its identity, have been validated in a higher organism,” said Carr. “That’s pretty cool.”

The discovery of ZBED6 was made possible by the new technique. “Technologies that we’ve developed at the Broad to understand very basic things can lead to discoveries that may influence both agriculture and health in the long term, because it allows us to find things previously hidden for technical reasons,” said Lindblad-Toh. “The innovativeness of the Broad’s platforms and this novel exciting technology allowed us to pull out a protein that turned out to be very important, not only for producing the best kind of meat that people like to eat, but also perhaps for its connection to a whole bunch of common human diseases.”