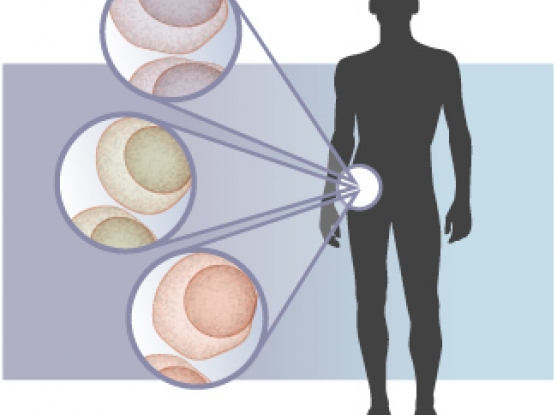 The most comprehensive genetic study to date of the blood cancer multiple myeloma has revealed that the genetic landscape of the disease may be more complicated than previously thought. Through results published in Cancer Cell today, a team of Broad researchers has shown that an individual patient’s tumor can harbor populations of cancer cells equipped with different mutations. These findings could have therapeutic implications for patients in the future.

“What this new work shows us is that when we treat an individual patient with multiple myeloma, it’s possible that we’re not just looking at one disease, but at many – in the same person, there could be cancer cells with different genetic make-ups,” said co-senior author Todd Golub, the Broad Institute’s Chief Scientific Officer and Charles A. Dana Investigator in Human Cancer Genetics at the Dana-Farber Cancer Institute. Golub is also a professor at Harvard Medical School and an investigator at Howard Hughes Medical Institute. “These findings indicate a need to identify the extent of genetic diversity within a tumor as we move toward precision cancer medicine and genome-based diagnostics.”

In a detailed study of samples from more than 200 multiple myeloma patients, Golub and colleagues identified frequent mutations in several key genes known to play an important role in cancer including KRAS, NRAS, and BRAF. But they found that many of these telltale mutations were not present in all cancer cells within a tumor – instead, they were often found in only a smaller fraction of cells, known as a subclonal population.

Many promising cancer therapies used in treatment today target a specific genetic mutation. This new work suggests that such targeted therapies may have limitations in patients whose tumors are made up of these subclonal populations.

The research team performed follow-up experiments in the lab to explore some of the therapeutic implications, looking specifically at BRAF, a cancer gene for which several inhibitors, or drugs, exist. Previous studies indicated that around four percent of multiple myeloma patients may have mutations in this gene, and a recent report on a single multiple myeloma patient treated with drugs targeting BRAF showed promising results. BRAF inhibitors have also been used to treat patients with melanoma and other forms of cancer. In the lab, however, the research team found evidence that treating a tumor harboring subclonal BRAF mutations with one of these targeted drugs may at best kill a fraction of the cells, and at worst, stimulate another cancer cell subpopulation to grow.

“There’s clearly potential for these drugs in some patients with multiple myeloma, but we show that there are also potential problems for others,” said co-first author Jens Lohr an associated scientist at the Broad and a medical oncologist at Dana-Farber. “If a patient has a BRAF mutation in less than 100 percent of his cells, or if he has mutations in KRAS or NRAS at the same time may influence the response to an inhibitor.”

Resistance – or the ability for tumors to shrink and then grow back – has become a major hurdle in treating patients with targeted therapies such as BRAF inhibitors. The new research suggests that subclonal populations could be one of the potential reasons many patients suffer relapse after treatment.

To take a genetic census of the populations of cancer cells that make up a tumor, the researchers used a computational technique known as ABSOLUTE, developed by the Broad’s Cancer Genome Computational Analysis group, led by Broad associate member and co-senior author Gad Getz. In this study, ABSOLUTE was used to analyze information from many samples, but it’s also feasible to use the algorithm to analyze information from a single patient. This could allow cancer researchers to examine a specific tumor and determine what fraction of cells contains a BRAF mutation or another such mutation.

The problem of subclonal populations is not unique to multiple myeloma. Researchers are applying the same technique to explore other forms of cancer to look for populations of genetically diverse cells within a single tumor.

“In order to appropriately choose targeted therapy, we have to have those studies,” said Lohr. “Matching the right drug to the right patient may not be as easy as finding a mutation and having a drug that targets it. We have to keep this additional parameter of heterogeneity in mind, and keep exploring what it means for therapy.”

Dana-Farber Cancer Institute is a principal teaching affiliate of the Harvard Medical School and is among the leading cancer research and care centers in the United States. It is a founding member of the Dana-Farber/Harvard Cancer Center, designated a comprehensive cancer center by the National Cancer Institute. It provides adult cancer care with Brigham and Women’s Hospital as Dana-Farber/Brigham and Women’s Cancer Center and it provides pediatric care with Boston Children’s Hospital as Dana-Farber/Boston Children’s Cancer and Blood Disorders Center. Dana-Farber is the top ranked cancer center in New England and fifth nationally, according to U.S. News & World Report, and one of the largest recipients among independent hospitals of National Cancer Institute and National Institutes of Health grant funding. Follow Dana-Farber on Facebook and Twitter.