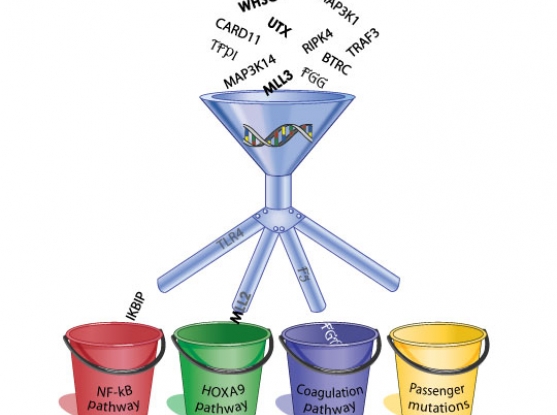 Hematologist Michael Chapman does not want to offer his patients false hope. A clinician who specializes in diseases of the blood, Chapman sees many patients with multiple myeloma – an incurable blood cancer that springs from plasma cells (a type of white blood cell) that have gone awry. Chapman is also the first author of a Nature paper published this week that reveals new insights into the mutated genes and mechanisms that may drive this cancer. The new findings will not immediately change the treatment options for Chapman’s patients – although there is a glimmer of promise for some that could result in a new, more effective therapy – but the results are already impacting the future of multiple myeloma research.

“We’ve uncovered genes that had not been suspected in cancer in any way,” said Chapman. “We’ve delineated perhaps entirely new pathways as being important in cancer.”

In addition to uncovering new pathways – the chains of chemical reactions that trigger changes in a cell – the researchers report newly discovered mutations, which will provide fodder for follow-up investigations in the field of multiple myeloma research. “It’s going to take a lot of biological research to sort out whether these will make good drug targets,” said co-senior author Todd Golub, director of the Broad’s Cancer Program and Charles A. Dana Investigator in Human Cancer Genetics at the Dana-Farber Cancer Institute, “But this is an example of how genetic analysis can help point the field in the right direction very dramatically.”

Multiple myeloma is the second most common blood cancer in the United States and causes about 20,000 new cases in this country every year. The disease’s five-year survival rate is less than 40 percent, which is low compared to other forms of cancer. Multiple myeloma begins in the bone marrow, where plasma cells become malignant, crowding out normal cells and attacking solid bone. No one knows the cause of the disease – it can develop in people with no known risk factors and in many cases, no family history of multiple myeloma.

Efforts to collect, store, sequence, and analyze samples cut across many groups at the Broad, including the Biological Samples Platform, Genetic Analysis Platform, and Genome Sequencing Platform. “A lot of the approaches that are now a standard part of cancer genome analysis were worked out on this project,” said Golub. “The efforts of these platforms were essential to the project’s success.”

Never before have scientists taken an in-depth look at so many multiple myeloma samples. Sequencing the full genome of a tumor is still a feat of technical and analytical prowess and only a few studies to date have looked across more than one. But in this latest project, researchers looked at nearly 40 tumor genomes. This gave them the power to detect previously unknown mutations. Researchers at the Broad Institute and Dana-Farber Cancer Institute led these sequencing and analysis efforts, working closely with a far-reaching network of collaborators who gathered patient samples.

“[Sequencing multiple tumor genomes] enabled us to pick out which genes are significantly, recurrently mutated in ways that we couldn’t have with a single genome,” said Chapman, who is supported by a Clinician Scientist Fellowship from Leukaemia and Lymphoma Research.

In half of the study’s patients, the researchers found mutations in genes that control two fundamental cellular processes: how RNA is processed and proteins are folded. Two of these genes, DIS3 and FAM46C, appear to play important roles in the stability of RNA and hence its translation into protein. Follow-up studies will be needed to understand what role these defective genes play in cancer and how they can inform treatment.

“These genes, which are frequently mutated, were not on anyone’s radar before when thinking about multiple myeloma specifically or cancer in general,” said Golub, who is also an investigator at Howard Hughes Medical Institute, and professor of pediatrics at Harvard Medical School. “This shows that there are entirely new cancer-causing genes that are going to be discovered through these sequencing efforts.”

One finding that may have more immediate clinical implications is the discovery of BRAF mutations in a small number of multiple myeloma patients. BRAF mutations have “never been a part of the multiple myeloma lexicon before,” according to Golub, but have been previously seen in other forms of cancer, including melanoma and colon cancer. Drugs are now in clinical development to target this particular gene and have shown promising early results in patients with melanoma.

“Individually, these genes are not mutated at a high rate, but by looking at all of the genes connected in a pathway, we increased our power to detect driving events,” said co-senior author Gad Getz, director of Cancer Genome Analysis at the Broad Institute.

Getz leads a team of researchers who have developed the computational tools needed to find these mutations. The team, composed of computational biologists, software engineers, and others, works closely with researchers in the Cancer Program, sharing data and insights back and forth. “We’re part of a chain of analysis,” said Getz. “All of the groups have worked together to build the tools and infrastructure to enable this research.”

Chapman credits the project’s findings to the sequencing of multiple whole genomes and the close work of the computational team and cancer researchers. “This kind of genomic approach enables us to discover the completely unexpected,” said Chapman. “We can find things that would never have been discovered by traditional means or by sequencing single genomes.”