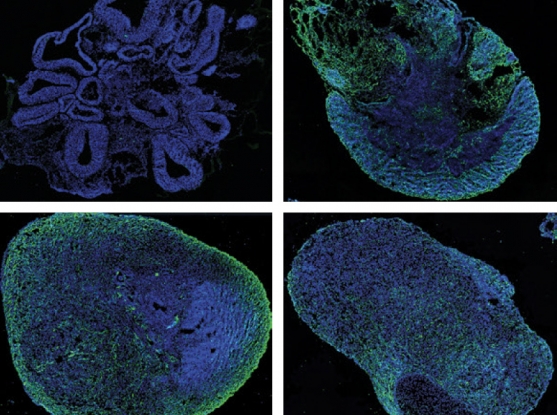 To study development of the human brain, scientists have increasingly turned to organoids, three-dimensional organ models cultured from induced pluripotent stem cells. However, most brain organoid models to date have been cultured on a scale of days or weeks, and are used to investigate very early neural development under various conditions. To accurately model development and pathogenic conditions at later stages, researchers need to generate and map more-mature human brain organoids that can gain additional features of the developed organ.

In a new Nature paper, researchers from the Broad Institute of MIT and Harvard and Harvard University developed protocols and culture conditions for human brain organoids that allow the tissues to grow and develop over periods of nine months or longer and enable unprecedented levels of cell maturation. The team saw some striking developments in the organoids, including spontaneously active neural networks and the development of light-sensitive cells. The paper provides the largest-to-date molecular map of the diversity and reproducibility of cell types generated in brain organoids, and suggests that three-dimensional brain organoids have the potential to model higher-order functions such as cellular interactions and neural circuit dysfunctions related to developmental and psychiatric disorders.

“In the past, researchers have used a cocktail of factors to develop pluripotent stem cells into different types of cells from the nervous system — neurons, astrocytes, sometimes even specific classes of neurons,” explains senior author Paola Arlotta, an institute member in the Stanley Center for Psychiatric Research at the Broad Institute, co-director of the nervous system disease program at the Harvard Stem Cell Institute, and professor of stem cell and regenerative biology at Harvard University. “But the brain contains an incredible diversity of cell types that interact and form connections. We took on the challenge of investigating to what extent such complexity and diversity of cell types can be produced in the dish, and how closely the organoid cell types mirror those in the endogenous tissue.”

Giorgia Quadrato, a postdoctoral fellow in Arlotta’s lab and first author on the paper, and colleagues adapted lab protocols to enable the organoids to develop long-term from healthy induced pluripotent stem cell lines. To identify the diverse cell types that organoids generate, the team used single-cell RNA sequencing (a recent invention named Drop-seq) to analyze gene expression in more than 80,000 individual cells isolated from 31 brain organoids, and then compared the results to expression documented in human brain tissue samples.

The team found that the longer the organoids developed, the more cell types they formed. “The cellular diversity that the organoids generated stunned all of us,” says paper co-author Steve McCarroll, an institute member at Broad, director of genetics for the Stanley Center for Psychiatric Research, and associate professor of genetics at Harvard Medical School. “The ability of stem cells within organoids to generate so many of the brain’s cell types — using their own genetic and molecular instruction book — evokes how development works inside the body.”

These cells included subtypes of neurons and progenitors of the cerebral cortex. Surprisingly, they also included many cell types of the visual system. Analysis showed that the organoids had generated a virtually complete array of cell types documented from the human retina — including photoreceptor-like cells. When the researchers shined light on the organoids, the stimulus affected neuronal activity. 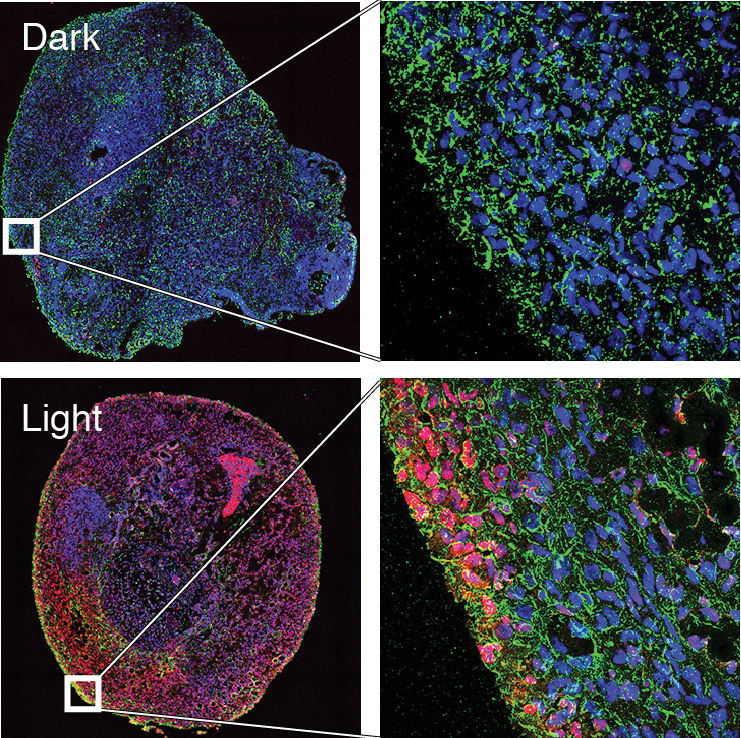 The team proposes that this model may someday make it possible to study the response of neuronal networks to physiological sensory stimuli. “This is something that could allow detection of even subtle functional abnormalities in the neurons of organoids generated from neuropsychiatric patients,” says Quadrato.

After about eight months in culture, the neurons in the organoids had also developed dendritic spines (protrusions from the dendrites where synapses are formed) visible via electron microscopy imaging — a key feature of mature neurons that has been notoriously difficult to obtain in culture.

“The presence of dendritic spines in these organoids is an important step for studying development and disease,” notes McCarroll. “Genetic studies indicate that disorders such as schizophrenia involve dysfunction at synapses and perhaps in the regulation or pruning of dendritic spines. An experimental model that develops spines can open the door to understanding how genes, and perhaps new pharmacological therapies, shape synaptic biology.”

Organoids could serve as important models for neuropsychiatric disorders, for which there are inadequate models to reflect both the genetic diversity that exists and the importance of this diversity’s impact on disease manifestation. “Human brain organoid models such as these can be produced from human cells with any genetic background,” says Steve Hyman, director of the Stanley Center for Psychiatric Research, core institute member at the Broad, and professor in the Department of Stem Cell and Regenerative Biology at Harvard University. “Given the large number and diversity of genetic variants that contribute to normal human cognitive and behavioral traits, and brain disorders such as schizophrenia, brain organoids are an extremely promising platform to study the effects of genes on the molecular, cellular, and synaptic building blocks of our brains.”

The team is continuing to explore avenues for maturing organoids on a faster timescale, guiding anatomical organization during development, and reducing variability in anatomy and cell composition between organoids to explore neuron maturation and networks. “Eventually, we hope to produce a framework for next-generation disease modeling, to look at aspects of human neurobiology that are not accessible in today’s models,” says Arlotta.

The Harvard Stem Cell Institute (HSCI) brings together more than 1000 scientists in the schools and affiliated hospitals of Harvard to fund novel research and implement new collaborative academic and industrial models. Having fulfilled the promise of its first decade by advancing the understanding of the potential of stem cell biology, HSCI is now focused on bringing stem cell-based treatments to patients as quickly as possible. While continuing to advance scientific discovery, we are developing treatments for diseases of aging, the blood, metabolism, and neurological disorders. hsci.harvard.edu