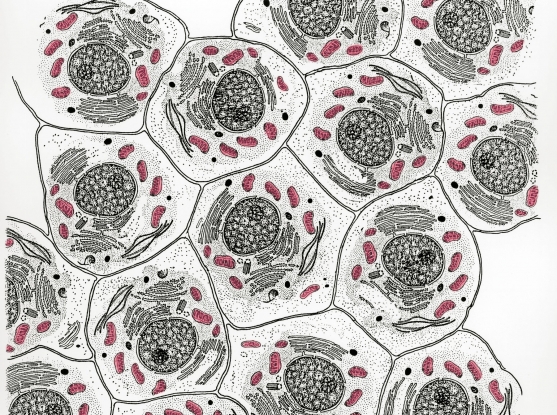 Fifty years ago, researchers studying mitochondria solved one mystery only to encounter another. In 1961, Peter Mitchell, who would go on to receive a Nobel Prize in 1978 for his work, discovered how energy is generated across the membrane of the mitochondrion, which serves as a cellular energy plant, converting raw fuel – oxygen and food – into energy units that cells use to power themselves. But in the same year, researchers made an unusual observation: mitochondria could slurp up calcium from their surroundings, producing a potentially important cellular signal. For decades, scientists searched in vain for the proteins that might make this calcium uptake possible and speculated about what this signal might trigger.

This week, a team led by researchers from the Broad Institute of MIT and Harvard and Massachusetts General Hospital announced the discovery of an essential component of the channel that allows calcium to flow into mitochondria. This fundamental discovery will help scientists assess the mitochondrion’s role in ways that were not possible before.

“Until now, everything we’ve known about calcium uptake has been correlative. Scientists have speculated on its importance in the control of cell death, energy metabolism, and development,” said Vamsi Mootha, co-director of the Broad’s Metabolism Program and senior author of the paper. “Now, we’ll be able to rigorously test those hypotheses.”

In addition, scientists will be able to sequence the genes that encode this protein in people with various diseases to look for mutations that disrupt calcium uptake in mitochondria.

Last year, researchers identified a protein known as MICU1, which senses calcium in mitochondria but is not directly involved in transporting calcium ions. The researchers suggested that MICU1 could be used as a molecular hook to fish out the rest of the machinery that lets calcium in.

“When we wrote our first paper, we hypothesized that MICU1 could be used as a biochemical bait to reveal the rest of the machinery,” said Mootha, who is also an associate professor at Harvard Medical School and Massachusetts General Hospital. “But our group is more adept at computation, so we instead used MICU1 as computational bait.”

Instead of using MICU1 as a biochemical bait and looking for proteins that physically bind it in the lab, Mootha and his team used computational techniques to comb through large datasets, looking for clues that would point to promising proteins that work alongside MICU1 to transport calcium. The team pursued three lines of computational investigation. First, they looked across 500 species to see which organisms expressed MICU1 and charted what other proteins followed a similar pattern across species. They found that MICU1 and another protein, which they dubbed MCU, followed the same evolutionary pattern of expression in 495 of the 500 organisms surveyed.

“What’s really striking,” said Mootha, “is that all three methods point to the same protein.”

These three lines of evidence, as well as biochemical experiments, suggest that MCU is a component of a channel that allows calcium ions to pass from the cytosol into mitochondria. The protein’s shape adds evidence, with two domains that span the mitochondrion’s membrane, or outer surface, and the protein also contained sequence features commonly found in channel proteins.

The Broad researchers worked with the pharmaceutical company Alnylam, which has developed a technology to silence genes in mice. When the team turned off the activity of MCU in mouse liver cells, mitochondria completely lost their ability to take in calcium ions.

“This is the type of thing you couldn’t do previously,” said Mootha. “There are no known drugs that work [in a live organism] to silence mitochondrial calcium uptake. Now, we can test if turning off MCU in the liver, for example, influences liver cell death, tissue regeneration, or the organ’s ability to produce glucose.”

The researchers hope that their work will enable the discovery of drugs that can target this ion channel for future studies. They also plan to investigate how MCU and MICU1 work together and what goes wrong when mutations occur. “We have so much to do – we now enter the molecular era of mitochondrial calcium physiology,” said Mootha.