Microbiome genes on the move 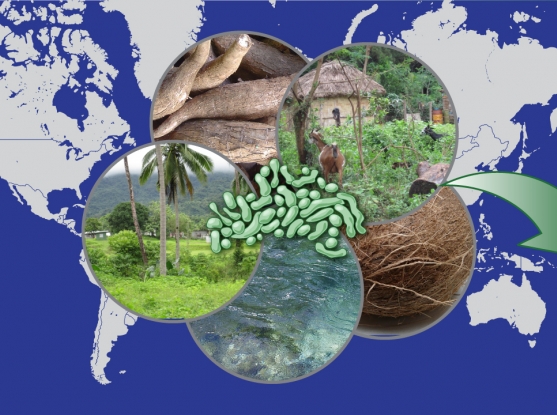 First author Ilana Brito sampled not only the human microbiome
in the remote villages in Fiji she studied, but also the reservoirs
of microbes in the community.
Image by Broad Communications
By Lisa Girard

The word “culture” typically refers to a group’s shared heritage – such as its customs, cuisine, music, and language – that connects people in unique ways. But what if culture extended to a population’s microbiome – the collection of microorganisms that live on and within the human body?

Scientists are learning that the state of the microbiome can have an impact on human health, with the risk for everything from autoimmune disease to certain cancers being linked to the diversity and wellbeing of the trillions of microbes living in and on the body. In work published in this week’s Nature, Eric Alm and Ilana Brito from the Broad Institute of MIT and Harvard and the Massachusetts Institute of Technology and their colleagues took a deep look at the microbiomes in developing world populations to study how culture can influence its makeup. They uncovered an interesting role for “mobile genes” – genetic material that moves between organisms by a process called horizontal gene transfer – in shaping culturally distinct microbiomes in developing world populations. These mobile genes are useful for highlighting key genes in microbial genomes that help individuals adapt to their environment.

Isolated populations provide a clear lens
In 2008, the Human Microbiome Project (HMP) of the National Institutes of Health began an effort to survey the human microbiome on a large scale, by gathering samples (e.g., skin swabs, saliva samples, and stool) from hundreds of healthy North Americans, primarily those living in urban areas. They sequenced the microbes in those samples with the goal of understanding how they influence health and disease, and produced an unprecedented look at the diversity of the healthy human microbiome.

The human race, however, is more diverse than urban-dwelling North Americans. To understand how the microbiome of a population from the developing world might compare to the HMP dataset, Brito traveled quite far from urban North America, venturing all the way to the South Pacific islands of Fiji, where many of the country’s native villagers live in remote, isolated communities. “I wanted to track microorganisms that move from place to place and I thought the best place for doing this was where all contacts are local contacts who use local water and food,” explained Brito, a postdoctoral researcher in the lab of Eric Alm who is an institute member at Broad Institute, professor of biological engineering at MIT, and co-director of the MIT Center for Microbiome and Therapeutics. “In contrast, in big cities, we come into contact with a lot of different people, eat food from around the world, and use lots of hygiene products and antibiotics which can prevent the transmission of even endogenous microbes.”

The villages Brito studied were on the second largest island in Fiji, but they were still fairly remote, with about 100-150 people living in each village. While the HMP had been limited in the amount of information it collected about its participants, Brito conducted a thorough survey of the villagers she met. She mapped out people’s family trees and social networks, noted what medications they took, and recorded the GPS coordinates of their homes and drinking water supplies. In addition to sampling the individuals’ microbiomes, she sampled their water, identified who touched livestock, and took samples from those livestock. Brito captured not only the human microbiome, but also the reservoirs of microbes in the community. The project’s name, the Fiji Community Microbiome Project (FijiCOMP), reflects this holistic approach.

Metagenomic data reveals layers of stories
While much of the earlier microbiome research used 16S ribosomal subunit sequencing to identify microbial species in a population, that approach tells little about the rest of their genomes. Brito’s goal was instead to do metagenomic sequencing, a more comprehensive way to look at microbial genomes that allows for more granular, strain level distinctions. “There are layers of stories that can be missed just looking at the 16S profiles,” said Brito.

When Brito arrived home from Fiji with more than 1000 samples in hand, she and Alm joined forces with Broad’s microbial sequencing group and, with the support of Broad along with funding from the National Human Genome Research Institute, were able to do metagenomic sequencing on over 500 of the samples. This was a complete game changer for the researchers, moving them from having very little data to building the largest data set of this type and the only one of its kind on a developing world population. So massive was the influx of data that the researchers had to develop a new way to assemble and analyze the information.

Mobile genes identify welcome genomic additions
Data in hand, Brito and Alm could now dig in. In particular, they were looking for mobile genes, genetic elements that have been shared among species and that likely perform some crucial or survival-promoting function. “If you look at a microbial genome with 5,000 genes in it, which ones are particularly important?” Alm asked. “Probably not all 5,000 genes. Most of them are probably either housekeeping genes that every bacterium has or some random selfish gene. But if you go into an environment and see a particular gene being transferred to many different species, to every bug in this environment, which is maybe rich in tetracycline, has this tetracycline resistance gene then you’re like aha!! Then it’s likely that gene is the one the ones out of the 5,000 genes that’s super important.“

Brito and Alm scoured their data for signs of horizontal gene transfer – the process by which mobile genes move among species – and in collaboration with researchers at Sandia National Laboratory and Broad core institute member Paul Blainey, they used microbial single-cell sequencing to create a new set of reference genomes to compare with the metagenomic data and identify mobile genes. To pinpoint gene transfer events, they took a cue from earlier work in Alm’s lab.

“In 2011, we created the first map of who was sharing genes with whom,” said Alm. “We downloaded all of the microbial genomes in Genbank and looked for identical stretches of DNA that were surprisingly present in two totally different species.” Between microbes that diverged evolutionarily hundreds of millions of years ago, it is expected that their sequences would have diverged over the years and there would be a lot of sequence differences. But, if large stretches of DNA are identical between two very different organisms, they reasoned, it strongly suggested that the DNA was horizontally transferred.

What Alm found in this earlier work was that two bacteria of different species were more likely to share a gene if they came from essentially the same site on the human body, for example, both from different spots in the mouth, than if they came from different sites – one from the mouth and one from the gut. So while this data showed that geography was not particularly indicative for sharing genes, perhaps due to lack of geographic coverage, what about in the developing world? What about people in these relatively isolated Fijian villages?

In this new study, Brito and the team looked at the gene transfer events, not only for the Fijian samples but also those from the Human Microbiome Project, to understand how the local environment influences the microbiome. What emerged from the data was that among the Fijian samples it was actually possible to identify particular functional genes selected for within particular populations, which meant the genes were culturally important.

One big difference between participants in the FijiCOMP study and the HMP is diet. For example, the Fijian diet is rich in local fare like cassava, coconut, and regional seafood. Looking at families of digestive enzymes called glycoside hydrolases, particular family members useful for digesting particular foods were transferred as mobile genes within groups of people that eat those foods. Here, looking at mobile genes allowed the researchers to more directly assess the impact of environmental factors such as diet rather than the impact of which species were present.

“While 16S sequencing can identify which species are present and let us make associations between particular species and disease, what the mobile genes tell us is that even if we know the species, there seem to be culturally important genes that are crossing species boundaries that don’t show up in the 16S data,” said Alm. “So if we want to fully understand the public health impact of the microbiome overall, we need to not only track the species, but also the genes of interest. Combining single-cell and metagenomic analysis provides a powerful way to do it.”

The authors would like to acknowledge support from the Fiji Ministry of Health, National Human Genome Research Institute, Center for Environmental Health at MIT, Center for Microbiome Informatics and Therapeutics at MIT, Wildlife Conservation Society and the Earth Institute at Columbia University, Broad Institute of MIT and Harvard, Burroughs Welcome Fund, the National Institute of Dental and Craniofacial Research, and the United States Department of Energy.

Better off without it? Broken gene may help protect against ulcerative colitis
Taking aim at rare cancer variants