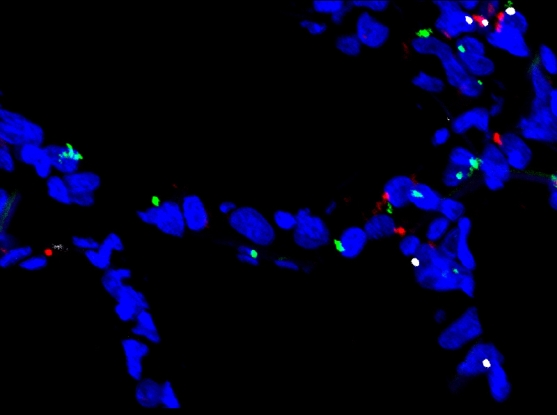 Credit : Airway cells express factors for entry of the SARS-CoV-2 virus, with the ACE2 receptor shown in white and the accessory protease in red or green.
Courtesy of the Tata Lab, Duke University
By Leah Eisenstadt

It’s rare for current events to inform the work of scientists as acutely as during a pandemic. In February 2020, a team of scientists from the international initiative of the Human Cell Atlas, including scientists at the Broad Institute of MIT and Harvard, sifted through a dataset on healthy human cells to look for ones the SARS-CoV-2 virus might be infecting. Initial searches (described in Nature Medicine and Cell) had turned up cells in the nose, lung, and airway, and surprisingly also in other tissues, including the intestines, liver, eye, kidney, brain, and heart.

“We were seeing these cells in places like the brain or olfactory epithelium, which enables the sense of smell,” said Broad core institute member Aviv Regev and co-chair of the Human Cell Atlas. The puzzled scientists contacted colleagues to see if they’d come across any COVID-19 patients with symptoms in these unexpected tissues, but soon found clues in the headlines. “Sure enough, a few days later we read in the newspaper that patients were reporting the loss of ability to smell, now known to be a common sign of coronavirus infection,” recalled Regev, who now heads research and early development at Genentech.

The team’s study, a meta-analysis of single-cell studies, confirmed that a wide array of cell types express molecules used by the virus to infect. The presence of these cells in several different tissues and organs may help explain the illness’s varied symptoms, including heart, kidney, and neurological problems. The scientists also found that the molecules the virus latches onto are more abundant in cells from people at increased risk of severe COVID infection – older people, males, and smokers. The work suggests possible molecular explanations for why some people are more susceptible to severe illness and offers a rich resource for studies of the virus and potential therapies.

The new work, which appears in Nature Medicine, yielded a robust baseline of data that is helping researchers interpret ongoing studies of cells from COVID-19 patients and of new treatments. The data are also publicly available on the Single Cell Portal and Terra platform.

Early views of an emerging pathogen

Early in 2020, scientists learned that SARS-CoV-2 enters cells by binding a protein, ACE2, on the surface of host cells and employing one of the cell’s enzymes, a protease such as TMPRSS2, to help it invade the cell.

With these early insights, scientists from across the Lung Biological Network in the Human Cell Atlas, an ongoing effort to build a comprehensive map of cells in the healthy lung, began brainstorming how they could contribute to the pandemic response. “We speculated that we could learn about COVID biology by examining the mountain of data we’d already collected on individual, healthy cells and the genes they express,” said Fabian Theis, Director of the Institute of Computational Biology at Helmholtz Zentrum München.

The atlas was designed, in part, to allow scientists to ask which cells in the body make a particular protein. “All of a sudden, we were those scientists wanting to ask this question,” said Sarah Teichmann, Head of Cellular Genetics at the Wellcome Sanger Institute, who co-founded the Human Cell Atlas and helped lead the new study.

They scanned data on cells from 25 tissues in the body to search for cell types vulnerable to viral infection — those expressing both ACE2 and either TMPRSS2 or another accessory protease, CTSL. They uncovered expected cell types such as secretory cells in the lung, but also highlighted less obvious ones, including corneal epithelial cells in the eye and oligodendrocytes in the brain. “Without single-cell analysis, we would not have been able to see these rare cell types,” said Martijn Nawijn, a professor at University Medical Center Groningen who is one of the coordinators of the HCA Lung Biological Network and helped lead the study. The cell and tissue types seemed to mirror the virus’s growing list of symptoms described in news and clinical reports, including loss of sense of smell, myocarditis, and neurological dysfunction.

To explore why the disease might spread easier or be more severe in certain individuals, the team knew they’d need more data on more people to make statistically sound conclusions. They turned to colleagues in dozens of labs across the globe in the HCA Lung Biological Network. The collaborators had collectively generated data on millions of individual cells and were beginning to gather and standardize the datasets to enable large-scale analyses when the pandemic hit.

“Everyone dropped what they were doing and contributed their computational and biological expertise to quickly get this data to a point where we could use it,” said Christoph Muus, co-first author on the new study and a graduate student at Harvard. “We’re grateful for our colleagues who put their own research priorities aside to contribute, process, and analyze this data, on an unprecedented timeline.”

The scientists worked urgently to annotate each dataset, assign standard labels to cell types across studies, and build a new, massive single-cell resource. “We chose to have each of the contributing labs use their own processing pipeline, rather than gathering raw data to collate and process later, which greatly sped the study’s pace,” said Malte Luecken, a postdoctoral researcher at the Institute for Computational Biology at Helmholtz Zentrum München, who co-led the study.

Aggregating 31 studies of more than a million individual cells from nose, airway, and lung tissue, the analysis revealed that expression of ACE2, TMPRSS2, and CTSL in certain cell types increases with age, and is higher in males and in smokers.

The team also found that cells in the nose, gut, and lung that express both ACE2 and an accessory protease showed activity in other genes involved in viral entry, key immune functions, and inflammatory signaling pathways. The finding that diverse cells can express immune-like programs could help explain the uncontrolled immune responses seen in severe cases of COVID-19.

The team examined the expression of viral entry factors in mouse models used in SARS-CoV-2 studies, and found patterns of increasing expression with age and cigarette smoke exposure similar to those seen in human cells. The finding supports the use of these mouse models for SARS-CoV-2 research.

This study demonstrates how the HCA’s ambitious effort to survey healthy human cells can yield insights on the transmission, pathogenesis, and underlying mechanisms of disease, providing a valuable context for studies of this emerging pathogen.

During the pandemic, the results of this work were useful in studies of blood samples from COVID patients and autopsy tissues of those who succumbed to the illness. The researchers are continuing to explore how similar analyses of healthy and diseased cells can lead to insights in other biological contexts.

“We’ve shown that by sharing data and looking across datasets, despite being in different labs in different countries or continents, we can work together to add one piece to the emerging puzzle of this disease,” said Muus.