The machinery of chromatin regulation 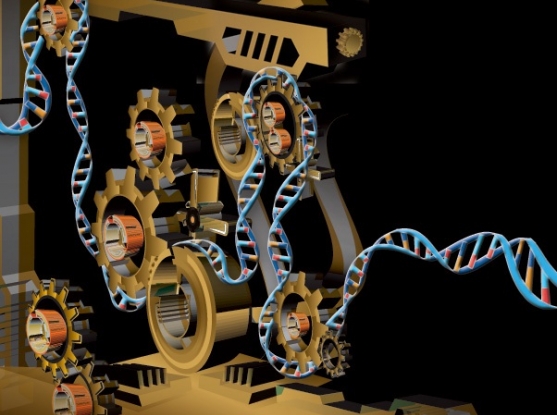 Ten years after the human genome was first published, researchers have found new clues into the machinery that influences gene function. The team, led by Bradley Bernstein, an associate professor of pathology at Massachusetts General Hospital and Harvard Medical School and senior associate member at the Broad Institute, and Aviv Regev, a core member at the Broad Institute and associate professor at MIT, focused on chromatin, the complex of non-genetic material associated with DNA that drives gene expression, and specific regulators that orchestrate chromatin activity. “We know that many different chromatin regulators direct chromatin’s structure and activity,” explains Charles Epstein, Epigenomics Program manager at the Broad Institute. But the specifics of how these regulators operate have been unclear.

In a paper published in the early online edition of Cell, the team reports that specific combinations of chromatin regulator proteins control essential chromatin activities, like histone modification. Histone proteins are part of the non-genetic material that composes chromatin. By modifying these proteins the chromatin influences how the underlying DNA genetic code is interpreted or expressed.

“We wanted to find a way to study the organization of the factors that regulate the chromatin,” says co-first author Alon Goren, a postdoctoral fellow at Massachusetts General Hospital and the Broad Institute. Over the past decade, researchers have discovered an abundance of new information about the importance of histone modifications and their effects on chromatin. Scientists have shown extensive correlations between histone modifications and the regulation of genes, protein and enzymes in a variety of cell types. “But there was a gap in the knowledge about the factors and complexes that add, remove, and maintain these histone modifications—protein factors we call chromatin regulators,” Goren adds. “This study demonstrates a systematic approach to understanding their functions in chromatin regulation.”

By devising ChIP-string, a novel technique that combines a standard method for studying chromatin (called chromatin immunoprecipitation or ChIP method) with the Nanostring nCounter Analysis System platform for studying gene expression, the team developed a screen to study chromatin regulators in two different cell types. “This approach allowed us to learn in a very robust and organized way the manner in which 30 chromatin regulators work in two human cell types – a cancer cell line and embryonic stem cells,” adds co-first author Oren Ram, a postdoctoral fellow in the Bernstein laboratory. “In this way, we learned a lot about their organization and the way they relate to each other.”

Specifically, the team found that chromatin regulators operate together in modules or groups. In the cancer cell line, six distinct modules were detected. Bifunctionality is found within each module with particular activators and repressors operating together – much like gears that connect with each other. “We found this modularity and bifunctionality in regulatory regions of the chromatin,” Goren explains. “We think this helps the cell fine-tune regulation like a delicate dial, adjusting as needed.”

Further, the researchers saw statistical evidence that the same regulator can participate or combine in different groups. This is not a physical association per se – though that may be possible – but just an understanding that regulators can join many different groupings depending on their function. Some associations are very strong, others more weak. “According to its complex partners, its activity might be different,” says Goren. “It is somewhat like telling me who your friends are and I’ll tell you what you do for a living.”

Going forward, the team hopes to predict histone modification patterns according to the type of chromatin regulator activity. By applying RNAi techniques, they will study the effects of removing one of the components of a chromatin-regulator module. “This will allow us to functionally understand what happens when one interferes with specific chromatin regulators,” adds Epstein.