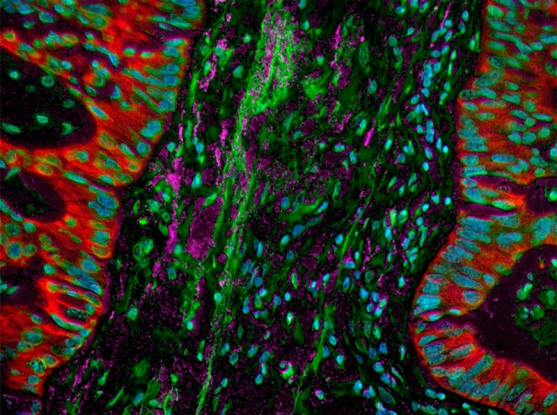 Lung cancer is the most commonly diagnosed cancer worldwide and the leading cause of cancer-related deaths, killing more per year than breast, colon, and prostate cancers combined. Over the years, studies of the lung cancer genome have fueled the development of drug therapies that target mutations in specific genes and pathways. But despite these advances, survival among lung cancer patients remains low (below 20 percent).

While immensely informative, the genome provides only one layer of information about cancer cells' inner workings. Writing in Cell, scientists from the Broad Institute of MIT and Harvard and an international group of collaborators participating in the National Cancer Institute's Clinical Proteomics Tumor Analysis Consortium (CPTAC) report that by taking a proteogenomic approach — one that integrates genomics with comprehensive proteomics — they have found how mutations that drive lung cancer affect the activity of key proteins, and also identified new interactions between lung tumors and the immune system. The findings point to opportunities for new therapies and a deeper understanding of lung cancer biology that studies of the genome alone could not. The researchers have made the data generated through this study available to the research community via the CPTAC data portal.

"Genes may provide the blueprints, but at the end of the day proteins are the engines of biology," said Michael Gillette, a senior group leader in the Broad Proteomics, group, a critical care physician at Massachusetts General Hospital, co-first author of the study with Proteomics group research scientist Shankha Satpathy, and co-corresponding author with Satpathy and Proteomics group senior director and institute scientist Steven Carr. "Having an accurate description of the cancer proteome and its post-translational modifications is pivotal for understanding what the key therapeutic innovations might be."

Working through CPTAC, the research team studied lung tumors and matched normal tissues prospectively collected from 110 patients diagnosed with lung adenocarcinoma (LUAD), a type of non-small cell lung cancer. The cohort included patients from eight countries representing a diverse range of ancestries, as well as a balance of patients with and without a history of smoking.

In the laboratory, the team comprehensively and systematically profiled the make-up, activation state (as measured by protein phosphorylation), and other post-translational modifications (including acetylation) of the lung cancer proteome, matching the data to mutations and other features of each tumor's genome and comparing the data against normal lung tissue from each patient.

"By looking at phosphorylation and other post-translational modifications in proteins and connecting those data to genomics," Satpathy explained, "you can really get a sense of how driver mutations in the genome actually impact signaling within the cell."

The data provided many unique observations that would not be apparent from genomics alone. For example, their analysis suggested the existence of a hitherto undefined fourth molecular subtype of lung adenocarcinoma, one with a unique biological signaling and immune response profile and which could have clinical relevance.

The team also reported that certain key proteins were highly activated in tumors harboring ALK fusions or EGFR or KRAS mutations — three common driving mutations in lung adenocarcinoma— and described the downstream impact of driver mutations on the expression, phosphorylation, and acetylation of several cancer-associated proteins, as well as outlier kinase expression. In particular they noted that the protein PTPN11 (also called SHP2) was frequently and highly activated in ALK fusion- and EGFR mutation-driven tumors. PTPN11 is a known therapeutic target, and their data suggests that patients whose tumors harbor those genomic aberrations might benefit from therapies that reduce PTPN11 activity.

Their findings also extended to the immune microenvironment within tumors, revealing features that help explain aspects of the immune system's response to tumors and flagging potential targets for immune-modifying therapies (aka immunotherapies). For instance, the team noted that immune "cold" tumors (ones with little infiltration by immune system cells) harboring mutations in the gene STK11 also showed a strong signal, detectable only through proteomics, for neutrophil degranulation, a process that may affect the anti-tumor immune response.

Additionally, the team found evidence that some immune "hot" tumors (ones with markers suggesting they are actively infiltrated by immune cells) had in fact mounted their own defenses, populating themselves with immune-inhibitory cells so as to “hide” from the host's defense system. This subset of tumors also increased their production of IDO1 and CTLA4, two factors that act as brakes on the immune cells. This finding suggests that immunotherapies that inhibit these targets may allow for a successful patient response.

Uniquely, the CPTAC cohort included almost equal numbers of patients with and without a history of smoking. By comparing tumors and normal tissues across these two groupings, the research team identified multiple pathways that were expressed differently between smokers' and never-smokers' tumors. These differences provide biological insights that the team could not glean at the level of DNA or RNA, further highlighting the added value of proteomic characterization. The analyses also nominated the protein ARHGEF5 as a potential target in never-smokers.

"What all of this has highlighted is that really understanding the deep nuances of biology requires an incredible degree of integration, across molecular profiling, across institutions, and across domains of expertise," Gillette noted. "All of this has to come together in order to achieve a coherent and meaningful outcome that could benefit patients in the future."

This study and a complementary one focused on lung cancers in patients from East Asia, also also published in Cell, are a part of a series of studies supported by the National Cancer Institute’s (NCI’s) CPTAC and International Cancer Proteogenomic Consortium programs to fight cancer using proteogenomics and precision oncology. Both layer comprehensive multi-omic analysis to uncover findings that would otherwise remain disconnected. The discovery of new lung tumor biology and a continuous look at early stage LUAD development provides a significant boost to help develop strategies for detection and management.

Previously published papers from these programs have focused on endometrial, kidney, breast, ovarian and colon cancers. Both studies have produced proteogenomic datasets that are available as a unique public resource for researchers and clinicians seeking to better understand and treat lung cancer.

"These studies and datasets point to a future for truly translational and clinical proteomics," said Satpathy. "Using this and other, similar future datasets we can begin to think about creating resources that can validate or answer specific questions about lung cancer biology and treatment.

"And now we are in a position where if someone has a question and can collect the appropriate samples," he continued, "we can collaborate and bring a new perspective to cancer biology."

"Our study, and others like it emerging from the NCI’s CPTAC program, highlight the tremendous value proteomics provides in building a much more complete understanding of tumor biology than genomics alone can provide," said Carr. "These studies also identify new potential therapeutic targets and help to establish mechanisms of resistance - all of which will ultimately benefit patients.".

Adapted from a press release issued by the National Cancer Institute. 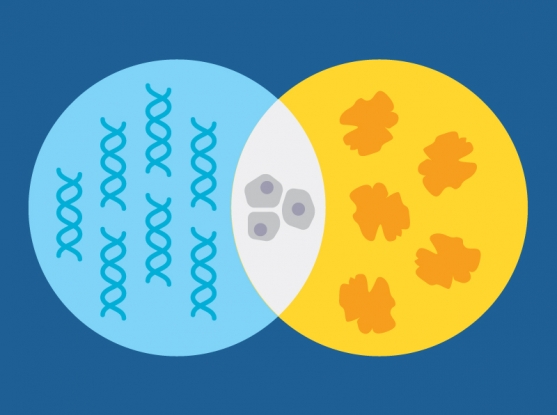