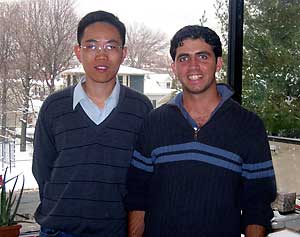 Because so many genes have been conserved, or passed along from species to species throughout evolution, comparing genomes across species has emerged as a powerful tool for discovering functional elements. Comparative genomics has been extremely successful in identifying protein-coding genes and large conserved non-coding elements in human DNA.

But the majority of the non-coding elements remain largely unknown. The most elusive are small regulatory motifs, of about seven to ten base pairs, that modulate gene usage.

"We set out to systematically discover an encyclopedia of regulatory motifs in the human, through the lens of evolutionary conservation," said Manolis Kellis, co-senior author of the study and associate member of the Broad Institute. "By comparing multiple species, we determined subtle conserved signals based on their repetition across the genome."

These regulatory motifs define the dynamic nature of the cell, dictating which signals a gene will respond to, and which specific tissues — such as liver, heart, or muscle — a gene will be expressed in, said the researchers.

"Fortunately, evolution is a good note keeper," said Kellis, who is also an assistant professor of computer science at MIT. "By referencing evolution's notes, we are now one step closer to a more thorough understanding of the human genome's controlling machinery. Once this machinery is known, we can then hopefully control the signals for medical purposes."

In the March 17 issue of Nature, the Broad researchers report:

Surprisingly, the study also led to hundreds of new microRNA genes, a number much higher than previous estimates suggested. "Nearly one-half of the motifs involved in post-transcriptional regulation are associated with microRNAs, demonstrating the extraordinary importance of this recently discovered regulatory mechanism," said Xiaohui Xie, first author of the study and a postdoctoral associate at the Broad.

The researchers now estimate that at least 20 percent of genes are regulated by microRNAs, an estimate much higher than previously expected. These tiny, single-stranded pieces of RNA may be one of the principal players in regulating cellular mechanisms. MicroRNAs can inhibit transcribed messages, or interrupt a gene's ability to make protein.

The study team employed an analysis method used recently by Broad scientists to study four related yeast species genomes. This work published in the May 15, 2003 issue of Nature by Kellis and colleagues showed that it is possible to systematically identify both genes and regulatory elements by comparing a small number of genomes in a related species. It was unclear however whether such analyses would be possible in the vastly more complex human genome.

"Evolution is one of the most powerful tools for understanding how genes are regulated in health and disease," said Eric Lander, co-senior author of the study and the founding director of the Broad Institute. "Our ultimate goal is to use evolutionary comparison to create a comprehensive catalog of common regulatory motifs in the human genome."

This work was supported by the National Human Genome Research Institute.

The Broad Institute is a research collaboration of Massachusetts Institute for Technology, Harvard University and affiliated Hospitals and the Whitehead Institute for Biomedical Research. The mission of the Broad is to create tools for genomic medicine, to make them freely available to the scientific community, and to apply these tools to propel the understanding and treatment of disease.