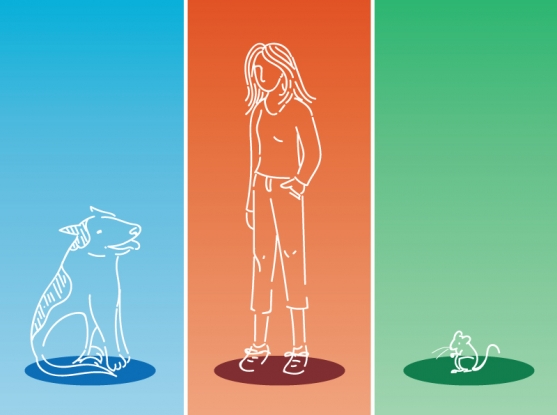 Guided by a multispecies comparison between dogs, mice, and humans, researchers identify new genes and biological pathways associated with OCD.

Obsessive-compulsive disorder (OCD) is a hereditary disorder that affects roughly 80 million people worldwide, but the biology of the disease is poorly understood. The frontline therapeutics, which target serotonin signaling in the brain, only work in a narrow subset of patients.

In a new effort to dig into the biology of OCD, a team led by Broad Institute researchers compared genetic information across multiple species that suffer from compulsive behavior disorders and identified four novel genes with OCD-associated variants in humans. The genes are involved in synapse maintenance and neurotransmitter signaling, suggesting potential mechanisms at work in the disorder. The research was published today in Nature Communications.

The team used this data to refine a list of more than 600 genes and 80,000 related regulatory elements that might be involved in human OCD. “We were seeking ways to take advantage of information from other species in order to inform and focus the study in humans,” explained Noh. “Each additional species that we looked at gave us more information about possible factors in the brain that contribute to OCD.”

The researchers designed targeted sequencing panels for these genes and examined them in two human cohorts, totaling more than 1,300 cases and 1,600 controls. Ultimately, the team identified four genes — NRXN1, HTR2A, CTTNBP2, and REEP3, all expressed in the brain — that had variants in either protein-coding or regulatory DNA significantly associated with human OCD.

NRXN1’s association was further supported using population-matched data from the Exome Aggregation Database as an additional set of controls. In follow-up experiments to investigate regulatory variants in CTTNBP2 and REEP3, the researchers introduced the regulatory DNA elements with mutations into human cells and observed changes in transcription factor binding, providing evidence for a mechanistic role in the cell.

Variants of the four genes are predicted to disrupt synapse development and throw neural pathways, including serotonin and glutamate signaling, out of balance in brain regions previously implicated in OCD. NRXN1, involved in synapse structure, and REEP3, which encodes a protein that shapes membranes within certain cells, have also been highlighted in studies of autism spectrum disorder. The data suggest new targets to pursue for an improved biological and therapeutic understanding of OCD.

Science for All Seasons: The genetics of OCD in dogs — and what it means for humans