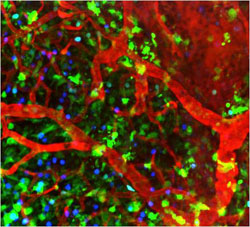 Dendritic cells (in green) and other immune cells (in blue) congregate around a blood vessel (in red).Image courtesy of Dr. Shakhar Guy

Scientists have deciphered a key molecular circuit that enables the body to distinguish viruses from bacteria and other microbes, providing a deep view of how immune cells in mammals fend off different pathogens. The new research, which appears in the September 3 advance online edition of the journal Science, signifies one of the first large-scale reconstructions of a mammalian circuit and offers a practical approach for unraveling the circuits that underpin other important biological systems.

"Our findings address a fundamental question in human biology: how do immune cells recognize various pathogens and use that information to mount distinct responses," said senior author Nir Hacohen, of the Massachusetts General Hospital (MGH) Center for Immunology and Inflammatory Diseases, an assistant professor at Harvard Medical School and a senior associate member at the Broad Institute. “We now have a detailed view of the circuitry that controls this critical process, providing a deeper understanding of immune biology that could inspire novel ways to treat disease and design better vaccines."

“One of the remarkable things about this study is the approach,” said senior author Aviv Regev, a core member of the Broad Institute, an assistant professor at MIT and an early career scientist at the Howard Hughes Medical Institute. “Our methods are not only general and applicable to almost any biological system, they are also practical for most laboratory settings. This is an important step that has broad implications for the scientific community.”

Cells receive and process information much like computers. Information flows in, is read and processed through a complex set of circuits, and an appropriate response is delivered. But instead of tiny transistors, the internal circuitry of mammalian cells is made up of vast networks of genes and their corresponding proteins. A frontier of modern genomic research is to identify these molecular parts and their interconnections, which reflect the normal — and sometimes faulty — “wiring” that underlies human biology and disease. Until recently, research in this area focused on yeast and bacteria because it was nearly impossible to undertake in mammals.

With a deep-seated interest in specialized immune cells known as dendritic cells, a research team led by scientists at the Broad Institute of MIT and Harvard and Massachusetts General Hospital set out to reveal the full scope of their internal circuitry. Dendritic cells are among the first to detect pathogens and can differentiate one type of pathogen from another, allowing them to orchestrate a pathogen-specific immune response. These cells accomplish such tasks through two crucial functions: first, they present small pieces of an infecting pathogen to other immune cells so those cells can learn to recognize it; and second, they instruct other cells to respond in ways that will eliminate the culprit pathogen.

To begin, lead author Ido Amit, a postdoctoral fellow at the Broad Institute and Massachusetts General Hospital, worked with his colleagues to assemble a detailed picture of the circuit’s output. The researchers did this by measuring the activities of thousands of genes after mixing parts of different pathogens, including RNA from viruses and pieces of the bacteria Escherichia coli, with primary mouse dendritic cells. (“Primary” cells are taken directly from the body, rather than propagated for long periods in the laboratory.)

Next, they scoured these data to identify genes whose activities change with varying conditions. These genes form the circuit’s potential regulatory framework, responsible for controlling the flow of information.

To figure out how these potential regulators work and how they are wired together, the researchers systematically eliminated each of them, and recorded the changes in the circuit’s output. This was made possible by the use of RNA interference (RNAi), which can reduce or “knock down” the activity of specific genes and can be applied to practically every gene in the mouse genome.

“Our use of RNAi was essential,” said Hacohen. “We couldn’t have done this work without the efforts of our collaborators in the Broad’s RNAi Platform and the tools developed by The RNAi Consortium.” The researchers also used a single-molecule technology that enabled them to generate sensitive readouts of gene activity.

Regev, Hacohen, Amit and their colleagues revealed a dendritic cell circuit with two major arms: an inflammatory arm, which is highly active during bacterial infections and can initiate a system-wide immune response; and an anti-viral arm, which is induced upon viral infections and coordinates a more focused response tailored to viruses. Together, these arms encompass about 100 regulators — roughly four times as many as were previously known to be involved — and include several proteins that were not suspected to direct immune responses. “These unexpected findings really underscore the power of an unbiased approach,” said Regev.

Another remarkable finding is the way these regulators operate. The researchers identified a surprising number of connections between regulators and other circuit components, more than 2,300 connections in total. In addition, some regulators seem to control a relatively broad swath of the circuit, including 25 genes or more, while others influence just a handful of genes. “A good analogy is the tuning dials on an old radio,” said Amit. “The big knobs provide coarse adjustments, while the little ones tend to be fine tuners.”

One intriguing “coarse tuner” is a protein called Timeless. In fruit flies, it controls circadian rhythms, the internal clock that keeps biological processes operating on a 24-hour cycle. In mammalian dendritic cells, however, Amit and his colleagues discovered that Timeless is a chief regulator of anti-viral responses, controlling over 200 genes required to fight viruses.

Another interesting regulator is CBX4, a “fine tuner” that controls the levels of a key protein involved in viral infections. This protein, called IFNB1 (for Interferon beta 1) requires precise control: if a virus is present, it must be highly active, yet if bacteria are the offending agents, its activity should be minimized.

Although the researchers’ findings are largely mechanistic in nature and do not yet have any direct bearing on human disease, there are some important medical implications. For instance, a complete understanding of the regulatory network that controls immune responses can help lay the groundwork for more precise interventions, including drugs and vaccines. Moreover, 12 of the regulators identified in the Science study reside in regions of the genome that have been linked to autoimmune and other related diseases in humans, and could enhance researchers’ understanding of the genetic susceptibilities to infections and other immune disorders

A complete list of the study’s authors and their affiliations:

* These authors contributed equally to this work

^ These authors contributed equally to this work

News / 10.28.21
A conversation about the legacy of ENCODE and what comes next
Read more
News / 10.13.21
Mapping the effects of genetic variation, one letter at a time
Read more
News / 12.2.21
Untangling the immune response to vaccines
Read more
News / 11.15.21
Artificial intelligence–based method predicts risk of atrial fibrillation
Read more