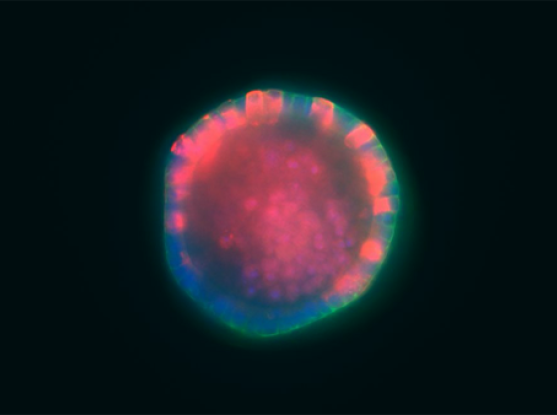 Mouse intestinal organoids treated with KPT-330 and stained for lysozyme (in pink), indicating the presence of Paneth cells.
By Leah Eisenstadt

Scientists used 3D “mini-organs in a dish” to identify a molecule that boosts protective cells in the gut.

The body’s barrier tissues — the skin, the airway, and the gut — defend against threats like bacterial invaders with the help of specialized protective cells. Loss or dysfunction of these cells can lead to diseases such as inflammatory bowel disease. One potential way to treat these disorders could be with drugs that cause barrier tissues to produce more of these specialized cells.

In a new study, scientists at the Broad Institute of MIT and Harvard, MIT, Brigham and Women’s Hospital, and the Ragon Institute have found a molecule that boosts the growth of a specific population of protective cells in the gut called Paneth cells. They identified the compound by using intestinal organoids — 3D cellular models that mimic the lining of the gut in a lab dish — along with high-throughput screening and analysis methods.

The work reveals a key cellular process not previously linked to the formation of these cells, and paves the way to future interventions that treat barrier tissue disease by altering the tissue’s cellular composition. The approach could also be applied to other barrier tissues in the body to better understand their biology and to explore how their cellular makeup might be manipulated therapeutically.

“This work is part of a growing effort to build models that more faithfully represent human biology and use them to impact human health,” said co-senior author and Broad institute member Alex K. Shalek, who is also an associate professor of chemistry at MIT, a core member of the Institute for Medical Engineering and Science, an extramural member of the Koch Institute and a member of the Ragon Institute. “Our goal is to use high-fidelity models like this one to deeply study intestinal disease, offering a paradigm for studying cells that traditionally have not been targetable, but that play a large role in the etiology of a number of diseases.”

​​“This approach has wide ranging implications. Since Paneth cells secrete natural antimicrobials, there is potential for a completely new strategy to manipulate gut microbiota via a Paneth cell axis, thus offering an additional step forward towards the treatment of many diseases,” said co-senior author and Broad associate member Jeff Karp, who is also the Distinguished Chair in Clinical Anesthesiology, Perioperative and Pain Medicine at Brigham and Women’s Hospital.

The study appears in the March 21 issue of Nature Biomedical Engineering, and is a collaboration of research groups led by Shalek, Karp, and MIT Institute Professor Robert Langer.

In Shalek’s lab, what look like ordinary specks of dust rest on pads of gel in experimental dishes. When viewed under a microscope, however, those specks reveal their true identity — tiny amoeboid-shaped assemblies of cells known as intestinal organoids. The tissue-like masses are studded with arms that resemble key structures in the gut called intestinal crypts and that harbor the same Paneth cells that protect against microbial invaders in the body.

Intestinal organoids were first developed over a decade ago. In a 2018 study, Shalek, Karp, and Langer led an effort to improve the model by identifying and correcting discrepancies in how Paneth cells develop and function in the organoid model versus in the body.

“Once we felt good about modeling this process in a dish, we asked whether we could actually learn from it, and specifically identify drug targets that we could then manipulate back in the body for a therapeutic effect,” said co-first author Ben Mead, a research scientist in the Shalek lab at the Broad and former graduate student in the Karp and Langer labs.

In the new study, the team searched for molecules that could boost the proportion of Paneth cells in the intestinal models. They created thousands of organoids using mouse intestinal cells and exposed them to hundreds of small molecules to look for those that increased the secretion of an antimicrobial enzyme called lysozyme, which is made by Paneth cells. They performed extensive validation studies, including single-cell RNA-sequencing, to find the molecules that increased the number of Paneth cells, rather than simply boosting the activity of existing ones.

The team homed in on one molecule, called KPT-330, which was originally developed as a blood cancer drug. They found that it promoted the growth of Paneth cells by boosting the differentiation of stem cells into Paneth cells in the organoids. The molecule does this by altering how different proteins are moved out of the cell’s nucleus. The researchers say this is the first time this process has been associated with stem cell differentiation into specialized cells.

To see if KPT-330 had the same effect on human cells, the researchers exposed human intestinal organoids, which lack Paneth cells, to the molecule. They observed some cells that appeared to be primed to become Paneth cells, but more factors will likely be required to get fully-fledged Paneth cells to form in the human model.

When KPT-330 was delivered directly to a mouse intestine, the number of Paneth cells increased, suggesting that the pathway they’d identified in the model is conserved in actual living tissue.

Fine-tuning the cellular makeup of the gut could offer a fresh approach to treating disorders that involve the gut lining, such as inflammatory bowel disease and graft-vs-host disease. The researchers hope to improve drug-delivery methods so that a molecule like KPT-330 could be more precisely targeted to the lining of the gut and one day tested in people. They also want to better understand how the molecule is working and to explore the impact of boosting Paneth cells on overall health.

The scientists add that the intestinal organoid model could be screened for molecules that boost other cell types in the gut, such as enteroendocrine cells that make hormones important for metabolic diseases. Further, they hope to see the development of organoids that model other barrier tissues, such as the upper respiratory tract, which could be screened for molecules that alter their cellular composition and potentially improve lung disease symptoms.

“These complex models potentially open up new discoveries or new ways to screen, but first we have to make sure they faithfully represent the biology,” said Shalek.