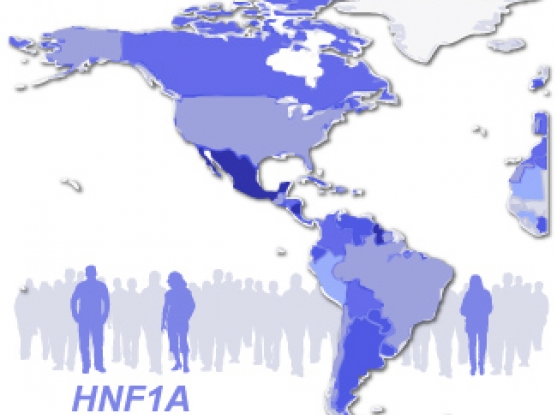 Although type 2 diabetes is a major public health problem across the globe, Latin American countries carry a disproportionately heavy burden (relative rates of type 2 diabetes by country shown in purple above). Broad Institute researchers and their collaborators have discovered a strong genetic risk factor for type 2 diabetes that primarily affects Latin American patients, but is rare elsewhere.

In the largest study of its kind published to date, an international team of researchers in Mexico and the United States has discovered a strong genetic risk factor for type 2 diabetes that primarily affects Latin American patients, but is rare elsewhere. The work further characterizes a gene called HNF1A, responsible for a rare, inherited form of diabetes against which a widely available and inexpensive class of drugs is highly effective. The discovery offers important new clues about the population genetics of type 2 diabetes in Latin American populations, and suggests the possibility of tailored treatments based on patients’ genetic makeup. The study appears in the June 11 issue of the Journal of the American Medical Association (JAMA).

“We’ve identified a genetic risk factor that is present in roughly 2 percent of Mexicans with type 2 diabetes, and its effects are substantial — raising a person’s risk of developing the disease five fold,” said corresponding author, Jose Florez, a Broad Institute associate member, an associate professor of medicine at Harvard Medical School, and an assistant physician in the Diabetes Unit and the Center for Human Genetic Research at the Massachusetts General Hospital. “It’s a striking finding, which really underscores the power of the genetic approach.”

Although type 2 diabetes is a major public health problem across the globe, Latin American countries carry a disproportionately heavy burden. In Mexico, for example, it is estimated that the disease affects over 14 percent of adults, which is approximately twice the rate in Europeans or white Americans. A number of factors are thought to drive this increased prevalence, including environmental as well as genetic influences.

Several large-scale genomic studies have been conducted to identify the genetic risk factors that contribute to type 2 diabetes. To date, more than 70 genomic regions have been implicated in the disease. However, the majority of these studies have focused on European populations, leaving a sizeable portion of the genomic landscape of the disease unexplored.

An international research team, known as the SIGMA Type 2 Diabetes Consortium, was formed to investigate the genetics of type 2 diabetes in Mexicans and other Latin American populations. In the current study, the team harnessed whole-exome sequencing, a method that decodes the genetic information within protein-coding genes — a relatively small portion of the genome called the “exome.” Whole-exome sequencing has the potential to reveal even rare variations in the genetic code that are often not captured by other approaches but are more likely to affect protein function.

This work was conducted as part of the Slim Initiative for Genomic Medicine for the Americas (SIGMA), a joint U.S.-Mexico project funded by the Carlos Slim Foundation through the Carlos Slim Health Institute. SIGMA focuses on several key diseases with particular relevance to public health in Mexico and Latin America, including type 2 diabetes and cancer.

For the JAMA study, the researchers analyzed samples from nearly 4,000 participants, both people with type 2 diabetes and healthy controls, who were of Mexican or other Latin American ancestry. Their top results identified two genes: SLC16A11, which the team previously found to be linked with an increased risk of type 2 diabetes (findings published late last year in the journal Nature), and HNF1A.

The researchers uncovered a mutation within the HNF1A gene that is present in roughly 2 percent of Mexicans with type 2 diabetes, but in only one-tenth as many healthy adults, and is associated with a four- to five-fold increased risk of the disease. This variant of the gene has not been previously associated with the common form of type 2 diabetes, and is most frequently found in Latin American populations or other populations with Native American ancestry.

While the role of the variant is new, the HNF1A gene itself is well understood. When its function is fully disabled, a rare, inherited form of diabetes known as MODY results. MODY, or Maturity Onset Diabetes of the Young, generally emerges earlier than type 2 diabetes, often in the mid-twenties, and occurs even in the absence of pre-existing obesity.

"This is an outstanding discovery — one that helps explain the epidemic rates of type 2 diabetes in Latin American populations,” said Teresa Tusie-Luna, project leader at the Instituto Nacional de Ciencias Médicas y Nutrición Salvador Zubirán and Principal Investigator at the Biomedical Research Institute, National University of Mexico. “But we must be mindful that, while the finding is associated with high levels of risk for the disease, we still do not know how the mutation behaves and if there is a specific therapeutic method can be safely applied in the clinic for individuals that carry the mutation. There is much more we need to learn."

This work was made possible by a large, multinational consortium that includes:
• The Boston-based team included researchers from the Broad Institute, Massachusetts General Hospital, and Harvard Medical School. It was led by Florez; David Altshuler, deputy director and chief academic officer at the Broad Institute and a Harvard Medical School professor at Massachusetts General Hospital; and Daniel MacArthur, group leader within the Analytic and Translational Genetics Unit at Massachusetts General Hospital, assistant professor at Harvard Medical School and a researcher at the Broad Institute; the analysis was led by Karol Estrada, a research fellow within the Analytic and Translational Genetics Unit at Massachusetts General Hospital and at the Broad Institute.
• The Mexico-based team included investigators from Instituto Nacional de Ciencias Médicas y Nutrición Salvador Zubirán, Instituto de Investigaciones Biomédicas UNAM, led by Teresa Tusié and Carlos Aguilar; the Instituto Nacional de Medicina Genómica (INMEGEN) led by Lorena Orozco; and the Mexico City Diabetes Study led by Clicerio González-Villalpando.
• The Los Angeles-based team included investigators from the Keck School of Medicine of the University of Southern California and was led by Brian Henderson and Christopher Haiman.
• The Norway-based team included investigators from the University of Bergen and Haukeland University Hospital, and was led by Pål Njølstad.

Please see the article for additional information, including other authors, author contributions and affiliations, financial disclosures, funding, and support.

About the Carlos Slim Foundation
Created in 1986, through social programs of strong impact for the most vulnerable population, the Carlos Slim Foundation has directly benefited more than 36 million people. With a marked sense of social responsibility, efficiency, and proven results, the Foundation has programs on various fields, such as education, health, nutrition, social justice, culture, human development, support on natural disasters, protection and conservation of the environment, and economic development that contribute to improve the quality of life of population of all ages, fostering the development of human capital and generating opportunities for people, their communities, and therefore, their countries.