In a study published in the September 24th issue of Nature, an international team describes how they harnessed modern genomic technology to explore the ancient history of India, the world’s second most populous nation.

The new research reveals that nearly all Indians carry genomic contributions from two distinct ancestral populations. Following this ancient mixture, many groups experienced periods of genetic isolation from each other for thousands of years. The study, which has medical implications for people of Indian descent, was led by scientists at the Centre for Cellular and Molecular Biology (CCMB) in Hyderabad, India together with US researchers at Harvard Medical School, the Harvard School of Public Health and the Broad Institute of Harvard and MIT.

“This work is an outstanding example of the power of international collaboration,” said Lalji Singh, senior author of the Nature paper, who is a Bhatnagar Fellow and the former director of CCMB. “Scientists in India and the United States have together made discoveries that would have been impossible for either group working alone.” 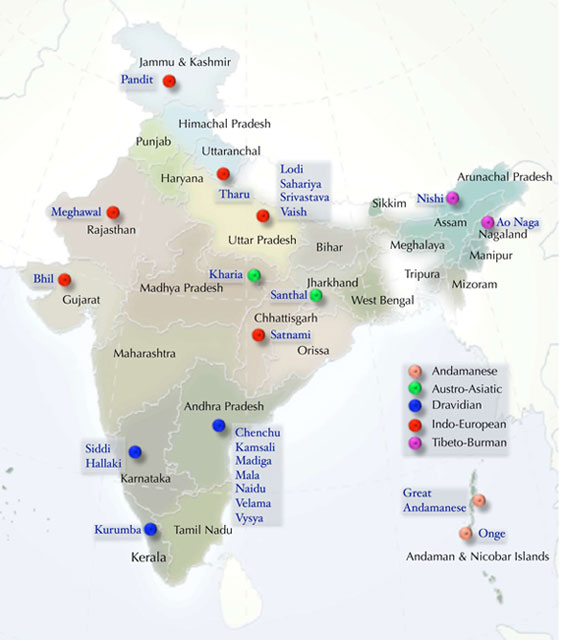 A map showing the groups across India included in the Nature study.
Photo courtesy of D. Reich, K. Thangaraj, N. Patterson, A. Price and L. Singh

Although the genome sequences of any two unrelated people differ by just 0.1%, that tiny slice of genetic material is a rich source of information. It provides clues that can help reconstruct the historical origins of modern populations. It also points to genetic variations that heighten the risk of certain diseases. In recent years, maps of human genetic variation have opened a window onto the diversity of populations across the world, yet India has been largely unrepresented until now.

To shed light on genetic variability across the Indian subcontinent, the research team analyzed more than 500,000 genetic markers across the genomes of 132 individuals from 25 diverse groups, representing 13 states, all six language families, traditionally “upper” and “lower” castes, and tribal groups.

These genomic analyses revealed two ancestral populations. “Different Indian groups have inherited forty to eighty percent of their ancestry from a population that we call the Ancestral North Indians who are related to western Eurasians, and the rest from the Ancestral South Indians, who are not related to any group outside India,” said co-author David Reich, an associate professor of genetics at Harvard Medical School and an associate member of the Broad Institute of Harvard and MIT.

The finding that nearly all Indian groups descend from mixtures of two ancestral populations applies to traditional “tribes” as well as “castes.” Kumarasamy Thangaraj, a senior research scientist at CCMB in Hyderabad and a co-author said, “It is impossible to distinguish castes from tribes using the data. The genetics proves that they are not systematically different. This supports the view that castes grew directly out of tribal-like organizations during the formation of Indian society.”

The one exception to the finding that all Indian groups are mixed is the indigenous people of the Andaman Islands, an archipelago in the Indian Ocean with a census of only a few hundred today. The Andamanese appear to be related exclusively to the Ancestral South Indian lineage and therefore lack Ancestral North Indian ancestry.

“The Andamanese are unique,” said co-author Nick Patterson, a mathematician and researcher at the Broad Institute. “Understanding their origins provides a window onto the history of the Ancestral South Indians, and the period tens of thousands of years ago when they diverged from other Eurasians.” Added Singh, “Our project to sample the disappearing tribes of the Andaman Islands has been more successful than we could have hoped, as the Andamanese are the only surviving remnant of the ancient colonizers of South Asia.”

The researchers’ work also has surprising and important medical implications. They discovered that many groups in modern India descend from a small number of founding individuals, and have since been genetically isolated from other groups. In scientific parlance this is called a “founder event.”

“The finding that a large proportion of modern Indians descend from founder events means that India is genetically not a single large population, but instead is best described as many smaller isolated populations,” said Singh. Thangaraj continued, “The widespread history of founder events helps explain why the incidence of genetic diseases among Indians is different from the rest of the world.”

Founder events in other groups, such as Finns and Ashkenazi Jews, are well known to increase the incidence of recessive genetic diseases, and the new study predicts that the same will be true for many groups in India. “It is important to carry out a systematic survey of Indian groups to identify which ones descend from the strongest founder events,” said Reich. “Further studies of these groups should lead to the rapid discovery of genes that cause devastating diseases, and will help in the clinical care of individuals and their families who are at risk.”

“Just as important as these findings are the statistical approaches that led to them,” said Alkes Price, an assistant professor of epidemiology at the Harvard School of Public Health and a co-author of the Nature study. “In studying Indian genetic variation we also developed a novel toolkit for understanding the relationships among groups and the history of mixture. We believe that these tools can drive future studies not only of Indian history but of groups worldwide.”

About the Centre for Cellular and Molecular Biology (CCMB)
The CCMB is one of the 38 laboratories of the Council of Scientific and Industrial Research (CSIR), Government of India. The primary emphasis of the CCMB is on doing basic research in biological sciences, including cell biology and development, genetics and evolution, molecular biology, genomics and proteomics, structural biology, transgenic and gene knock-out, infectious diseases, biotechnology and biomedicine. The CCMB promotes centralized national facilities for new and modern techniques in the inter-disciplinary areas of biology and interacts with industry to carry out basic and applied research. The CCMB was chosen as a centre for excellence by UNESCO Global Network for Molecular and Cell Biology MCBN. The Third World Academy of Sciences, TWAS, Italy has designated it as a South Centre for excellence for research and training. For further information about CCMB, go to http://www.ccmb.res.in.

About the Harvard School of Public Health
Harvard School of Public Health is dedicated to advancing the public's health through learning, discovery, and communication. More than 400 faculty members are engaged in teaching and training the 1,000-plus student body in a broad spectrum of disciplines crucial to the health and well being of individuals and populations around the world. Programs and projects range from the molecular biology of AIDS vaccines to the epidemiology of cancer; from risk analysis to violence prevention; from maternal and children's health to quality of care measurement; from health care management to international health and human rights. For more information on the school visit: http://www.hsph.harvard.edu

About the Broad Institute of MIT and Harvard
The Eli and Edythe L. Broad Institute of MIT and Harvard was founded in 2003 to empower this generation of creative scientists to transform medicine with new genome-based knowledge. The Broad Institute seeks to describe all the molecular components of life and their connections; discover the molecular basis of major human diseases; develop effective new approaches to diagnostics and therapeutics; and disseminate discoveries, tools, methods and data openly to the entire scientific community. Founded by MIT, Harvard and its affiliated hospitals, and the visionary Los Angeles philanthropists Eli and Edythe L. Broad, the Broad Institute includes faculty, professional staff and students from throughout the MIT and Harvard biomedical research communities and beyond, with collaborations spanning over a hundred private and public institutions in more than 40 countries worldwide. For further information about the Broad Institute, go to www.broadinstitute.org.