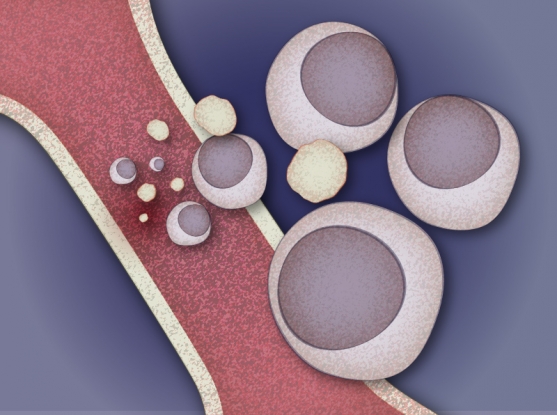 Long before multiple myeloma becomes a malignant disease, the collection of immune system cells and signal carriers amid the tumor cells undergoes dramatic shifts, with alterations in both the number and type of immune cells, researchers at Dana-Farber Cancer Institute, the Broad Institute of MIT and Harvard, and Massachusetts General Hospital (MGH) report in a new study.

The findings, published online today by the journal Nature Cancer, are a step toward more personalized treatment of multiple myeloma. Future treatments may be geared to the immune microenvironment of each patient’s disease – the specific constellation of immune cells in and around myeloma tissue – the study authors say.

“Our results provide a comprehensive map of the immune changes that take place in pre-malignant myeloma,” said Broad Institute Cancer Program associate member Irene Ghobrial of Dana-Farber, the co-senior author of the study with institute member Gad Getz of MGH and the Broad's Cancer Genome Computational Analysis Group. “The discovery that the immune microenvironment is abnormal even at very early stages of the disease may suggest strategies for targeting myeloma before it becomes malignant.”

Multiple myeloma is a cancer of white blood cells known as plasma cells in the bone marrow. It is preceded by precursor conditions known as monoclonal gammopathy of unknown significance (MGUS) and smoldering multiple myeloma (SMM), in which people have abnormal plasma cells in their bone marrow but no physical symptoms or organ problems. Because not everyone with MGUS or SMM develops outright myeloma, treatment doesn’t begin until symptoms of myeloma – such as bone pain, low blood counts, kidney problems, and nerve damage – appear. Researchers are working on ways to intercede in the disease process early on to identify individuals at risk and prevent the development of full-blown myeloma.

The new study represents the first time that single-cell RNA sequencing – in which scientists pluck individual cells from tissue and scan their RNA to determine which genes are active – has been used to identify features of the immune microenvironment in myeloma precursor conditions.

“We wanted to understand the changes that occur in the microenvironment as the disease progresses from MGUS to SMM to overt myeloma, as compared to the bone marrow of healthy tissue donors,” said co-first author Oksana Zavidij of Dana-Farber and the Broad Institute. “The approach could ultimately shed light on why some patients progress to myeloma while others don’t and help us better target treatments to individual patients.”

The analysis revealed major immune changes early in the course of myeloma development:

“These changes didn’t correspond to any particular precursor condition,” said co-first author Nicholas Haradhvala, of the Broad Institute, MGH, and the Harvard Graduate Program in Biophysics. “They were found in different combinations in patients with MGUS and SMM, suggesting an axis upon which patients could be stratified for evaluation of individual-specific risk of progression and potential for early intervention.”

“Our findings have described the landscape of dysregulated immune system that can be used to follow up in much larger studies and build robust associations with patient risk and progression,” added Getz.